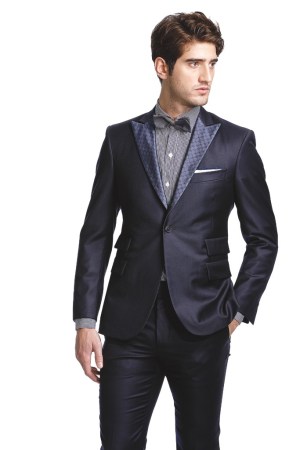 NEW YORK — Since boyhood, Ian Velardi wanted to work for Ralph Lauren. He interviewed at the company numerous times but a job never came to fruition. “As a kid I used to walk around SoHo and spend hours in the Polo store. All I wanted to do was work for Polo. That was my dream. But it didn’t happen,” recalled the 30-year-old designer.

While that ambition hasn’t been realized, another one has. This past fall, he launched his own men’s label, which is now carried exclusively at Barneys New York and online at Parkandbond.com, a division of Gilt Groupe. As fate would have it, the collection sits near Ralph Lauren Black Label at the Barneys flagship on Madison Avenue.

Velardi launched the line following a career that has included design, merchandising and sales stints at Hickey-Freeman, Hart Schaffner & Marx and Rogue’s Gallery. His time at Hickey-Freeman — where he worked for two years on the flagship brand and then two years on the youthful hickey spin-off — were seminal to the eventual development of his business. “I was very fortunate to have met a lot of the buyers and fashion directors at stores that have been very helpful,” he noted. “If you don’t have those relationships, it’s much more difficult for a small brand to start out.”

A key relationship formed during that time was with Studio AD, a design and sourcing agency based in Prato, Italy, which now serves as a crucial go-between for Velardi and his Italian fabric mills and factories. “They help me with all aspects of my sourcing and samples and prototypes and production,” said Velardi. “I really owe them everything. They are like family to me now.”

His designs emphasize classic men’s wear staples that have been updated and modernized, in trim fits and luxurious fabrications from Italy and England. The spring line includes Italian military jackets re-imagined in linen herringbone, suit jackets with lapels resurfaced in butterfly-pattern silks and safari jackets done in denim.

“My goal is to take a classic item and rethink how to improve it and make it innovative so that the end result is something modern and fresh and unique,” explained Velardi, who was born and raised in New Jersey and studied marketing at Indiana University.

“He’s got a knack for blending American utility and European luxury in a single piece of clothing,” said John Auerbach, president of Park & Bond. “The line has been selling well. We’ve seen particular strength in his garment-dyed pants, and can’t keep his leather military belt in stock.”

Added Velardi, “I’m a one-man operation right now and it can feel like I’m being pulled in a million different directions. But all I ever wanted to do was design and create product and I’ve always been ambitious.”