The members-only sample sale e-commerce site, has bolstered its senior management team and revamped its site. 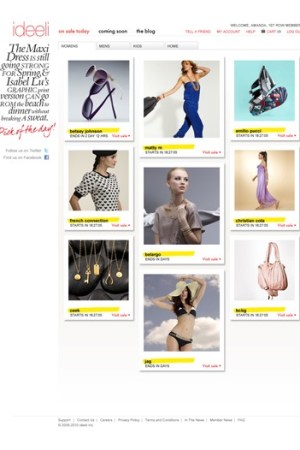 In honor of its third anniversary, Ideeli, the members-only sample sale e-commerce site, has bolstered its senior management team and revamped its site.

With 2.5 million members — a considerable leap from its one million base in December — Ideeli aims to have $150 million in revenue by the end of the year, according to chief executive officer Paul Hurley. What began in 2007 as three staffers working around the dining room table of Hurley’s downtown Manhattan apartment is now a 100-person operation headquartered in a two-floor Lafayette Street office. Four relatively recent recruits are chief financial officer Bob Ross; director of brand marketing Tamara Rosenthal; senior vice president of operations Jacob Hawkins, and vice president of engineering Eduardo Frias. That foursome previously held senior-level posts at Urban Outfitters Inc., ASmallWorld.net, Overstock.com and Johnson & Johnson, respectively, where they helped “create multimillion-dollar companies,” Hurley said.

“We have created a world-class team with deep domain experience in retail and e-commerce,” he said.

Critical as those additions might prove to be, Ideeli members will be more inclined to notice the aesthetic changes that will go live Saturday on Ideeli.com. The company tapped House + Holme, which is led by Ronnie Cooke Newhouse and Stephen Wolstenholme to make those changes. They have spruced up Ideeli’s Web pages with a greater variety of photography such as Polaroids and cleverly cropped images to give the site more of a glossy magazine feel while maintaining its “friendly, approachable style,” Hurley said. Instead of overhauling the site with an array of new features, the new approach is more nuanced. “A lot of what they have done is about how the site looks and feels. That is a feature in some ways,” he said. “Stephen and Ronnie just have such a strong sensibility but they also have the ability to listen to what we’re about and to relay the visual DNA of our brand. That is a key part of the conversation we have with our members.”

Ideeli’s membership is largely rooted in households with an annual income of upward of $100,000. The customer age range averages between 25 and 45. To date, Ideeli has 600 brand partners, including such notable names or newcomers as Christian Cota, Furla, Marc by Marc Jacobs, Betsey Johnson, Kenneth Jay Lane and Pucci.

Of the leading four members-only shopping sites, a group that also includes HauteLook, Rue La La and Gilt Groupe, Ideeli saw the highest rate of growth in unique visitors, according to Comscore data for the 12-month period from April 2009 to April 2010. As means for comparison, both Gilt Groupe and Rue La La saw a 17 percent increase, HauteLook posted 115 percent and Ideeli led the pack with 216 percent, according to an Ideeli spokeswoman.