In The Limelight: J.W. Anderson

In J.W. Anderson’s case, any number of wrongs apparently do make a right.

By Samantha Conti and Julia Neel on November 11, 2013
View Slideshow 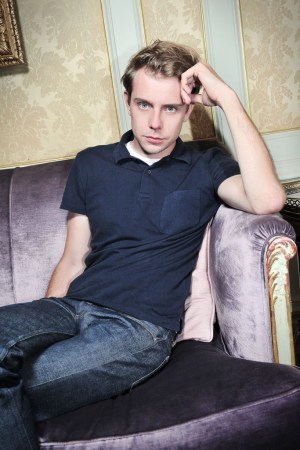 Donatella Versace has called him a great talent. LVMH Moët Hennessy Louis Vuitton is backing his signature brand—and banking on him to refresh Loewe. He’s been a Topshop darling, a winner at the British Fashion Awards—and he hasn’t even hit the big 3-0.

Now, the pressure is really on Jonathan Anderson of J.W. Anderson, the British fashion industry’s latest rock star on the rise. But it’s unlikely that will ruffle the poised and supremely self-confident designer with the big, intelligent eyes.

“From the beginning, he wanted to put something out there that was him. He’s been [developing] a specific point of view—and he sticks to it. And his designs speak to culture and to counter-culture,” says Humberto Leon, co-creative director of Kenzo and cofounder of Opening Ceremony, which has been carrying J.W. Anderson since the line launched in 2008.

Anderson has been a regular risk taker on the catwalk, and he has clearly not taken an easy route to success: A fan of architectural, androgynous silhouettes that make use of unexpected textures and fabrics—such as screen-printed cotton sponge—he’s dressed men in frilled-hem shorts, bandeau tops and body-con knits, and women in open-back tunic dresses resembling hospital gowns and sturdy white shoes that wouldn’t look out of place in the nurse’s ward.

He says that he loves the look of “wrong” and believes that “unisex is the most modern thing that a lot of people do not touch on. I think there’s a sharpness of the bridging of the [male and female]. When something is ugly and wrong, I feel that it’s right. You’re not used to it.” He describes men’s wear, which represents about 20 percent of his business, as a “think tank” for his women’s designs, hence the frills and skimpy tops.

LVMH and Opening Ceremony aren’t the only ones who feel that Anderson’s wrong is right: “I look back to earlier days of Christopher Kane, and I see he’s getting a similar customer,” says Natalie Kingham, head of fashion at matchesfashion.com.

“People enjoy the aesthetic and have fun with it, and it’s grown and taken on momentum. At the moment, we find that some of his very sculptural shapes and his big skirts, for example, are among the bestsellers, and he does knitwear very well and he did some great denim pieces for the pre-collection,” Kingham adds.

Anderson’s spring collection, shown during London Fashion Week, gave a nod to Rei Kawakubo and Issey Miyake, and Anderson is up front about his “massive respect for the Japanese approach to design. It’s very theoretical and it’s willing to break a code,” he says.

The show features sheer baby-doll tops and long skirts, sculpted 3-D chevron pleats and puckers, a seersucker column gown with an exaggerated obi belt and printed sequin skirts. Backstage, he says his aim was to explore a “textural landscape, a modern peasantry and a merging of textures.”

Born in Northern Ireland in 1984, Anderson studied men’s wear at the London College of Fashion, graduating in 2005, and worked in visual merchandising at Prada under Manuela Pavesi. He consulted for several brands before launching his label in 2008.

Anderson’s company, headquartered in Hackney in east London, comprises 14 people and counts about 75 wholesale clients for his women’s and men’s collections, including Net-a-porter, Selfridges, Matches and matchesfashion.com in the U.K., Ikram and Opening Ceremony in the U.S., and 26 doors in Japan.

Last November, Versace tapped Anderson to do a capsule collection for Versus, Versace’s second line, that was filled with crop tops and body-con silhouettes, some of which were aimed at men. The Italian designer admits that she initially thought: “He’s not for me,” but quickly reconsidered, calling him “a great talent” and a “genius.”

RELATED STORY: The Odd Couple: Donatella Versace and J.W. Anderson for Versus >>

“He’s part of this emerging generation of talented new designers,” says Pierre-Yves Roussel, chief executive officer of LVMH’s fashion division. “We believe in the potential of his brand.” Roussel points out that the Versus collaboration proves Anderson “can interpret a brand,” noting that the young designer submitted a “brilliant” proposal for Loewe that was “fresh, modern and a new way of looking at the brand, while respecting the history.”

Anderson says he’s happily anticipating the lucrative new chapter in his fledgling career: His immediate priority is to build a management infrastructure, allowing him to focus on designing his signature women’s and men’s collections—and take on his new responsibilities at Loewe.

He is to remain the majority shareholder in the business he founded, but tells WWD, shortly before news of the deal broke, he will happily leave behind some of the roles he currently juggles, including “ceo, cfo, stock manager.”