In the Limelight: Nicholas Kirkwood

Nicholas Kirkwood has come a long way from the converted disabled bathroom that he used as a studio when he was creating his first collection. 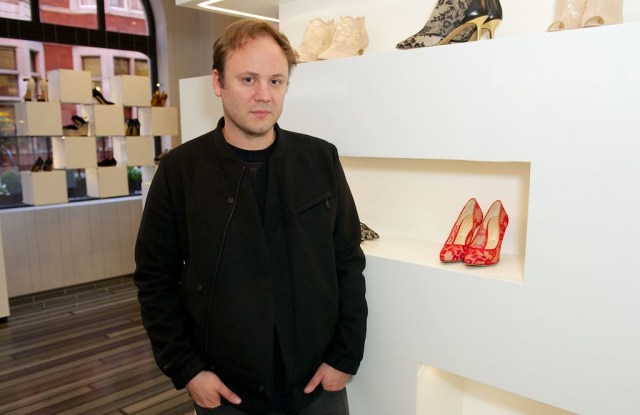 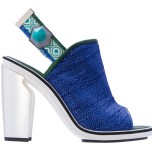 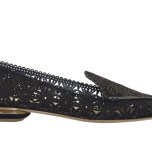 Nicholas Kirkwood has come a long way from the converted disabled bathroom that he used as a studio when he was creating his first collection. Now he’s regularly jetting from the style capitals to Toronto and Dubai, and designing his footwear from a studio beneath his flagship in London’s Mayfair.

Literally, it’s about five-and-a-half miles from that “loo” in one of the seedier parts of East London to the genteel environs of Mount Street, where his neighbors include Lanvin and Oscar de la Renta.

Figuratively, he’s come a million miles. When LVMH Moët Hennessy Louis Vuitton took a majority stake in his business just after London Fashion Week, Kirkwood was jet-packed into the company of brands including Givenchy, Céline, Fendi, Kenzo, Marc Jacobs and the granddaddies of them all, Dior and Louis Vuitton. The house also recently took a stake in J.W. Anderson, another young London-based designer.

“It takes a huge weight off my mind,” says Kirkwood, of what the investment means to his business. “Now I’ll be able to put things into motion, which I didn’t necessarily have the means to do previously. And having access to their great team of advisors is invaluable.”

Kirkwood’s first priority is to expand his team. He says hiring a chief financial officer to manage the business’ numbers is his main objective. Then he’d like to set up a team in the U.S. to “have people on the ground there, other than just retail staff,” to provide support for wholesale accounts as the brand expands Stateside. He’d also like to grow the design team and spend more time “actually designing.”

“At the moment, it’s just me and my assistant,” he points out. “I need to put a bit more focus on the men’s [line] and potentially expand into handbags. It’s something I’ve wanted to do for years but not until the time was right, when I could develop it properly. There needs to be a real reason for [handbags] to be in the collection rather than just doing them to do them.”

With two stores in the U.S. already—in Las Vegas and New York—he’s planning his next American store in Miami. “Miami is a great market for us, it caters for the South American customer a lot,” explains Kirkwood. “We’ve sold to a few stores there, so we know we have a strong customer base.”

Kirkwood is known for his sculpted, architectural designs and catwalk collaborations with labels including Suno, Rodarte, Erdem, Roksanda Ilincic and Peter Pilotto. He uses unusual materials such as shaved stingray, laser-cut mirrored leather and rubberized suede. He is most famous for towering and glamorous heels but is introducing more flats and lower heels to the collection, a fact for which he says his mother is “grateful.”

It’s been a remarkably busy year for the Central Saint Martins and Cordwainers-trained designer. He was initially contacted by LVMH and invited to meet with Delphine Arnault, the daughter of chief executive officer Bernard Arnault, in Paris in January, just after he introduced his first collection of men’s shoes. A week after that meeting, he won the fourth BFC/Vogue Designer Fashion Fund prize, netting him funding of 200,000 pounds, or $323,640 at current exchange, along with mentoring.

His summer vacation was four days on the Greek island of Patmos, ostensibly for a friend’s wedding.

“It was amazing. It has a beautiful rocky landscape, beautiful beaches, white houses everywhere,” Kirkwood says. “A bit of a mission to get there, though. You have to fly to Kos, a package holiday place, you have to stay there overnight and then you get the ferry in the morning, which takes a couple of hours. But then it’s a totally different world.”

But he couldn’t spare any more time for a longer escape, what with LVMH scrutinizing his business, preparing his spring collection, and making catwalk shoes for Suno, Erdem, Roksanda Ilincic and Peter Pilotto, among myriad other tasks.

As yet, there’s still no proper vacation in the cards for Kirkwood. At press time, he was about to open a pop-up shop near his London store to showcase the new men’s shoe line—the success of which could conceivably lead to a permanent men’s store—as well as working on his third men’s collection to show at London Collections: Men, and designing his women’s resort range, which he will preview in January.

While the LVMH investment has freed him up to do what he does best, that hasn’t equated to more free time.