In the Mood… Puffer Piece

The tone of the collections swung from happy-go-lucky to dark and edgy, with a little dramatic sparkle in the mix. 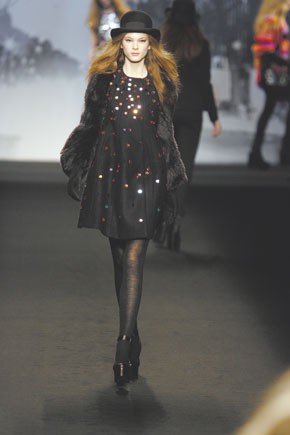 The tone of the collections swung from happy-go-lucky to dark and edgy, with a little dramatic sparkle in the mix.

Sonia Rykiel: Whatever Sonia Rykiel’s backstage secret is, she should bottle it up and sell it. Once again she sent out a parade of prancing models, happier than you’ve seen them since the last Rykiel show. They skipped and smiled down the runway in an equally cheerful lineup replete with the house’s signature spunky stripes, knits and trompe l’oeil motifs. Knits came in bell-shaped dresses that sported whimsical bunnies or swans, or multicolored striped sweaters, some that slouched saucily off the shoulder. Shifts, jackets and pants bedazzled with colorful disks added to the playful spirit, which reached a fever pitch at the glitter-fueled finale, complete with dresses emblazoned with Rykiel’s face. Covered-up coats and long, printed silk goddess dresses with sexy peekaboos suited a more grown-up girl, but, for the most part, newly promoted creative director Gabrielle Greiss seemed to have a younger audience in mind. And while any plucky girl would get a kick out of bejeweled bloomers or a sheer purple tiered dress, they might be a little difficult for Rykiel loyalists who are merely young at heart.

Elie Saab: According to Elie Saab’s show notes, the colors and geometry of Piet Mondrian’s iconic paintings influenced the designer this season. It was obvious in silk chiffon dresses, long and short, printed with unsightly color-blocked squares and black-and-white stripes, less so when it came to black suits trimmed with Spanish ruffles or fur and purple and teal green cocktail dresses. Elsewhere, Saab worked with origami effects, asymmetrics, sequins and Sixties-ish buttons on all manner of eveningwear, much of it perfect for a beauty pageant.

Rue du Mail: After last season’s gauzy ethereal affair, Martine Sitbon decided to go dark — way dark. Her girl for fall is a lot tougher and edgier, with a slight streak of sci-fi slick. This season, she has a thing for lepidoptera and six-legged creepy crawlies, though that wasn’t evident in her opening dresses with sinewy, linear patterns with a hint of Art Nouveau as well as cocoon shapes and origami-like flaps and folds. Sitbon’s bugs, however, were the underlying motif of the collection. Some of her dresses took flight with abstract wing patterns in glittery sequins and paillettes; others took on the theme in terms of silhouette, with fluttery sleeves and backs. One of her best was a simple satin frock whose bodice subtly suggested a butterfly shape. This was Sitbon’s strongest collection yet since returning to the runway with Rue du Mail, and one could say the metamorphosis is complete.

Kenzo: You can count on Antonio Marras to serve up lavish clothes peppered with plenty of multicultural references. For fall, the designer offered a tribute to the late Japanese model Sayoko Yamaguchi, who was a muse to the house’s founder, Kenzo Takada, in the Seventies. It translated into lush embroideries, colorful geometric prints, florals and beads — all somewhat à la Japonaise. Marras’ egg-shaped confections came with floaty sleeves or a cape back. And he further drew on his theme by offering kimono ties on satin dresses and fluffy angora knits. It made for an artistic show with more than its fair share of decorative flash.

Antonio Berardi: The hour-long wait for Antonio Berardi’s show had photographers hooting and the audience wondering if it would be worth it. Well, when Berardi was good, he was very good — his sleek tailoring, as in the skintight gray sheath, was, as always, a sexy shot. But when he was bad, let’s just say there was much head scratching. Unfortunately, the collection, a bit Death Star-futuristic, was rife with such moments. Take, for example, his push for structured volume, which reached almost comic proportions with a too-big trench and a plaid blouse with inflated elephant ear-like sleeves. Eveningwear fared better, with a rather elegant parade of column gowns, including a navy number with a floral band at the bottom. But the closing studded and paillette-embellished frocks would have been perfectly chic, if not for the colossal capes billowing behind the models like giant parachutes.

Moncler Gamme Rouge: Giambattista Valli used many of the same tricks featured in his own collection — luxe duchesse satins, feathers, fur and ribbon effects — in his first outing for Moncler Gamme Rouge. But here he adjusted the volume appropriately. It was turned down in comparison to his Valli lineup, but puffed up enough to give sporty down jackets just enough dressed-up drama. Trapezes done in black, red and white duchesse, and tighter zip-ups covered in ruched silk chiffon made keeping cozy an exercise in glamour.