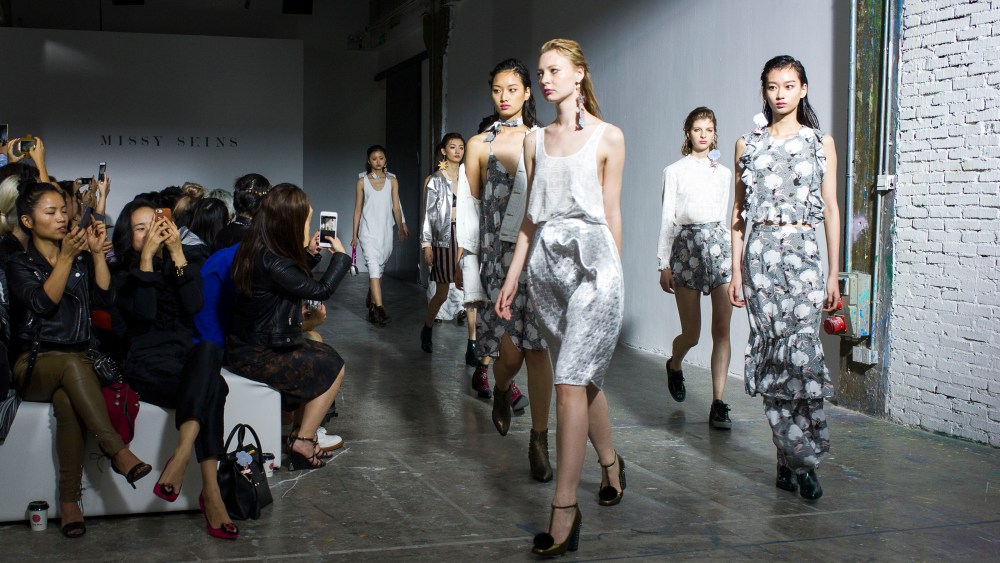 SHANGHAI — With each season, Shanghai Fashion Week further cements its reputation as a platform devoted to the best of Chinese design. At the same time, a rising generation of fashion designers from China, but often educated or working internationally, do their part to positively influence the perception of Chinese fashion, both here and abroad.

The following shows represent some of the standouts at Shanghai Fashion Week’s spring 2017 edition, which ran Oct. 12 to 20:

A Central Saint Martin’s graduate — and former theater kid and ballet dancer — Angel Chen has garnered a reputation for her dramatic flair, and her most recent presentation at Shanghai Fashion Week was no exception.

Opening with a performance of traditional Chinese drumming, she incorporated some overtly Chinese elements into her collection (as in previous seasons, Chen marked oversize Windbreakers with Chinese characters, this time around predominantly in sequins).

The designer was inspired by an ancient book called “Shan Hai Jin,” which depicts monsters of the land and sea. On clothing these monsters were embroidered motifs, some of the embroidery done using real silver and gold thread.

Chen continues to offer clothing that is largely unisex and multifunctional, at the same time offering a vibrant aesthetic. Also of note were the technologically advanced materials, with a plastic raffia, paper yarn and treaded cotton woven fabric exclusively produced for the brand in France.

Moving away from the high-quality leather leggings with which the brand built its reputation, the spring 2017 collection from Missy Skins, helmed by Australian designer Natasha Ivachoff, was a distinctly feminine and fun outing.

Wild prints, including cheetahs and leggy pin-up girls, were balanced by more delicate pink chiffon and lace pieces. Denim jackets with patches and slogans also made a lighthearted appearance.

With several Lurex and sequined tank tops and dresses, Missy Skins introduced a brand of sparkle that looks at home on the street, not just in a disco.

The few leather pants had elastic waists to nip the middle, worn either gathered at the ankle or with a lace trim.

There’s something about Hiuman’s aesthetic that seems so Chinese, even without overt reference to the country’s history or culture in the spring collection. Perhaps it’s in the pajamalike cut of garments, reminiscent of the Mao Suits of old, or maybe it’s in the disaffected urban youth vibe, common to China’s biggest cities.

The looks for this collection employed plenty of light layering, with voluminous cotton shaped into wide legs and sleeves. In the plaid outerwear with chiffon paneling, there was an element of the Nineties grunge movement.

Ostensibly a men’s wear designer, Hiuman actually shows mainly unisex looks, such as tunics layered over neat, wide-leg denim slung low on the hip, or under sweaters and denim jackets.

A longtime favorite of Shanghai Fashion Week and Shanghai women generally, CJ Yao sent out a spring 2017 collection of louche streetwear, perfect for a long, hot summer in the city. The velour and bell-bottoms gave off a distinctly Seventies vibe, and distressed knitwear emphasized the relaxed and easy wearing nature of the collection. Even with these seasonal elements, the brand signatures — sharp pleating, color blocking and asymmetry — remained. Asymmetric pleated chiffon shirts falling to mid calf at their longest point were a common sight, as was denim, complete with exaggerated fraying — all in a distinctly oceanic palette.

This graduate of The New School’s Parsons School of Design now splits her time between New York and Shanghai, though she is spending more and more time in China in order to be closer to her huge home market and its production facilities.

Organza and silk dresses with digital prints or embroidered patches featuring a Wonder Woman-style character, as well as strawberries, fish and flowers were a highlight, as were the gingham off the shoulder tops with colorful organza tufts at top and bottom. Bare shoulders are something of a theme in the colorful world of Leaf Xia.

Ruched velvet dresses in red and pink added a romantic element to the lighthearted collection, in which bold colors and themes were attached to wearable and accessible cuts.

The focus for designer Daniel Xu Zhi Chen is always materials and what new forms and fashions they can be manipulated into. Fall is a more natural fit for his often heavily textured looks, but with each spring season Chen more deftly incorporates his signatures with a lighter touch.

The difference with this collection was his embrace not only of the technical aspects of fashion but a seemingly heightened appreciation of the woman who might wear it. A distinctly feminine collection in a muted palette of pale pink, ivory and navy, highlights included form-fitting dresses made from silk thread braided into a knit style, often left loose at the ends for an exaggerated fringe effect. The result combined impressive texture and dramatic movement.

In contrast to these ultra-feminine dresses came some sharply tailored suiting, with plaited excess material creating feathered features at the waist, sleeve or leg.

Design duo Qiaoran Huang and Joshua Hupper have built a following in China among young, urban women attracted to the brand’s subversive themes and cool, East Village aura. This latest outing took the Seventies New Age concept of Indigo Children as its inspiration, giving the collection a strangely current vibe — given the success of Netflix series “Stranger Things” in recent months, with its similar themes and retro throwback nature.

In contrast to the design inspiration from a previous era, the collection also utilized cutting edge technology by implanting blockchain chips into the clothing. Blockchain code is the same technology used to create Bitcoin and is increasingly being introduced by luxury companies in their fight against counterfeit products.

The Babyghost approach to blockchain is more about marketing than anything else, with the chips interacting with smartphone apps and connecting members of the quasi-fanatical Babyghost community to one another.

This capsule collaboration between cashmere brand 1436 and Uma Wang was inspired by a trip designer Wang Zhi took to the grasslands of Inner Mongolia — traditionally a land of nomadic herders. Designs included superfine cashmere in sleeveless cable knitted tunics over gauzy lace slipdresses, a charcoal cape with ruffled layers and bonnets representing the sherpherdess traditions of the Mongolian people.

The simple, wearable silhouettes feature less volume than one might usually expect from Uma Wang. The color palette and inspiration may be earthy, but the nature of this collection is distinctly romantic.

The Shenzhen-based designers of Ffixxed, Australian pair Kain Picken and Fiona Lau, each season continue to expand on their central use of natural materials — including Japanese cotton, woven bamboo and denim — molding them into more and more wearable and accessible collections.

In their spring outing, panels of shirts and jackets were line with press-studs, unbuttoned and rebuttoned so panels and sleeves sat askew. The color palette of mustard, black, navy, white and lime reflected an ease, of wear and of living that the clothing — and summertime — is imbued with.

Deepmoss designer Dido Liu was inspired by the art, food and culture of ancient Persia. Many looks were made from raw silk, cut in a free-flowing style, with sweet touches including pearlescent buttons. A glossy sheen, something like the shimmery light of the desert, permeated the fabrics.

Colors for the collection were limited — clean white, gray, navy, simple stripes and a rusty red hue — with lace adding texture to some looks.