Opulence, glamour and embroidery were designers' focus as the couture week marked its 10-year anniversary. 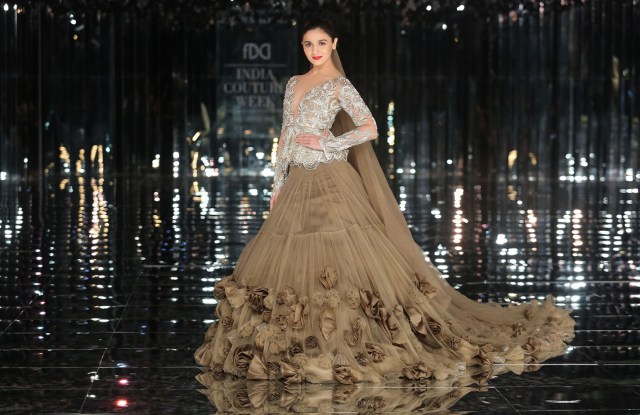 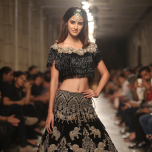 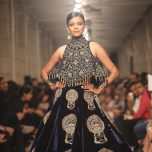 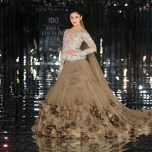 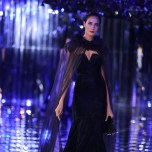 NEW DELHI — India Couture Week 2017, organized by the Fashion Design Council of India, marked a decade in existence and was extended to seven days this year. The finale by designer Manish Malhotra encapsulated some of the main trends in the country’s couture market — a sense of grandeur with an Indo-global design, lots of embroidery, shimmer, rustling silk and long trains.

“I like a lot of floral motifs, I like a lot of shimmer. It’s about a lot of drama for me,” Malhotra told WWD. The designer is based in Mumbai, and is famous for his red-carpet looks that Bollywood actors collect; his shows are studded with Bollywood stars as a result, including Alia Bhatt and Ranveer Singh this season.

The construction was different this time, Malhotra explained. While the lehngas (long skirts) had grand trains, the tops were fitted, without much embroidery, allowing for jewelry. He paid extra attention to “an interesting back.”

“When a woman leaves the room, she should leave her mark. It doesn’t have to be her clothes — it could be her voice, or her mind. But because I make clothes, that’s the quality I infuse. I feel that the back should be dramatic,” he said.

The collection had lehngas and gowns. “I did not do gowns earlier, but in the last two years I started making them, as they are growing increasingly popular,” he explained. His colors were whites, cobalt blue, black and some beige. “I’ve done red and gold. Now it is for the girls who say, ‘I am not a pink girl.’ It is for the pre-wedding events, the reception.”

Shimmer was all over the runway during the week, as were the use of white and black — both colors that are not usually part of the Indian repertoire, and certainly not in the Indian wedding tradition. Still, the shows generally were geared to cater to the huge bridal market, which is estimated to be more than $42 billion a year and growing in double digits.

“There is no other country in the world that has weddings to the level there are in India, giving the opportunity to wear and flaunt craft to a different level,” explained design duo Shyamal and Bhumika, who are based in Ahmedabad and showed at the couture week for the first time. “In India we don’t wear heavy outfits for many occasions, so by default it is about weddings.”

“In India couture is also craft,” Shyamal explained. “Beyond the structure of the garment, it is all about detailing. Craft is the couture that India has to offer and what India can give you — what South Asia can give you — you cannot get anywhere in the world. To make one outfit, you have a hundred hands.”

The embroidery this time was exceptional, and a running theme through the week.

“You can do it in thread, with gold yarn, sequins made of gold, as was done for royalty in earlier times. When Indian designers use that same technique and tweak it so that it is a glass pipe or a crystal, it just makes that intricate factor shimmer much more, and you get that bling factor. The bride has to stand out,” Bhumika observed.

For years, designers aimed to rise beyond the wedding market, which has been the single biggest driver for Indian designers in terms of financial growth. But now top designers are focusing on couture week, and several are choosing to show only at this event. Other designers showing included Rohit Bal, Anamika Khanna, Anita Dongre, Anju Modi, Gaurav Gupta, Manav Gangwani, Monisha Jaising, Rahul Mishra, Reynu Taandon, Rina Dhaka, Tarun Tahiliani and Varun Bahl.

Seen throughout the collections were fringing, tassels, net, and a lot of layering for men, for whom black was the primary color with a lot of gold embroidery. Jackets still ruled, a chance for additional embroidery and to set off the garments, and although they took a back seat, the pinks and reds that have always been the traditional centerpiece of an Indian wedding kept appearing.