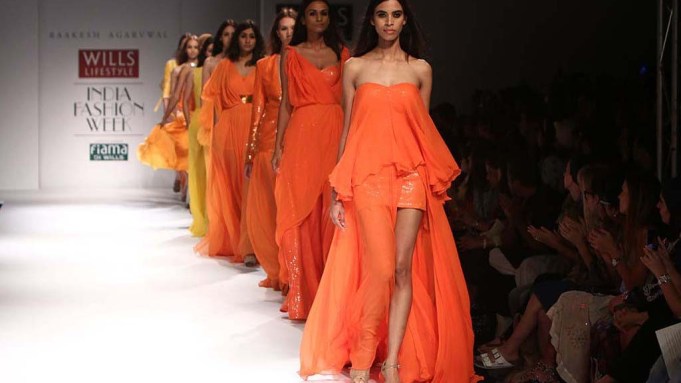 NEW DELHI — As a merchandising team from a Mumbai-based retailer set to work at Eka’s stall on the lower level of the exhibition space at Wills Lifestyle India Fashion Week, designer Rina Singh, who owns the brand, quickly sorted through the designs for the coming season and told them about pricing, colors, timelines and possible variations she could offer.

Like many of the other designers showing during the week, Singh said later that there was no question about it: Business was good and growing.

Many of the designers at the shows, which ran from Oct. 8 to Oct. 12, spoke about the energy they felt at the event and, like Singh, were also talking numbers.

“I’m happy with the buyers here. We’re creating more business along with our styles,” said young designer Atsu Sekhose. He explained that many of the buyers were regulars at the event but that, along with the market, he had been changing his positioning to include more evening and festive wear. He said his ready-to-wear line ranged from 6,000 to 25,000 rupees, or $97 to $406, respectively, at current exchange. His opening-day show displayed his new direction with a combination of hand-woven textiles and techno fabrics with strategic embroidery.

There were 124 designers showing at WLFW, and the standouts included Wendell Rodricks’ play on whites and focus on fabric as well as Rohit Bal’s embroidered pieces and his finale, which, instead of being held at the fashion week’s venue Pragati Maidan, used as a backdrop the ancient monument Qutub Minar.

Embroidery and sheer outfits still dominated the runway, but there was a clear shift toward more Western styles as well as rtw, as per the organizer’s guidelines: WLFW is aiming to broaden its global appeal and become more than just a local fashion week. Overall, the silhouettes were sportier and more relaxed, geared toward comfort.

As designer Nachiket Barve pointed out, “Comfort is important and so is the ability to reuse a garment, transforming it with a simple twist. My designs are especially geared to change your look each time you wear the same dress.”

Mirror work was another major trend this season, with both small and large mirrors returning to Indian fashion after several years of being out of style. Rehana Sultan, whose collection used a lot of mirrors, said her collection was different because, “this time, my collection is geared to markets in the West. I’ve made a very conscious choice here.”

However, as designer Nandita of the Hemant & Nandita duo observed, clothing with mirror work can be tricky in terms of washing and maintenance and perhaps more of a challenge for global markets.

Adding to the comfortable styling this season were dhoti pants, variously zipped half saris and Western styles that were fitted at the torso but layered below the knee or to the ankles.

Transparency was still prevalent, but it had a softer, more feminine silhouette, with simple lines above the waist and falling in soft folds around the knees. Colors were more elegant, with shades of orange making a major play for attention.

As for business, the explosion of online retailing in India meant there were many more buyers from within the country as well as the regular visitors, including many smaller retailers from the Middle East, long a big market for Indian fashion.

Samant Chauhan, who last week showed a collection focused on layering and embroidery, said the online market is pushing designers to adapt their prices and techniques. “We’re finding ways to create designs and keep prices down, as well. For example, we could do a very similar design but one with highlights, with embroidery, and [use] digital prints to save costs and get the pricing right for online portals,” he said.

Sana’a Kayum, a Dubai-based designer who exhibited for the first time, said she had enough business within the first two days to justify the trip. Pallavi Mohan, who showed her label Not So Serious on the first day, said she was very conscious about her prices. “I come from an export background, where a large order means 20,000 or more,” she said. “Here, we are talking about much smaller numbers. The price has to justify the business.” Her collection centered on comfortable cuts in georgettes and chiffon silk organzas, with a lot of subtle embroidery.

The young designer Jyoti Sharma presented her label Bhanuni in the afternoon on Saturday, which happened to be Karva Chauth, the day when, until the moon has risen, married women fast for the health and prosperity of their husbands.

“But I was so absorbed by my show that I completely forgot about food and water anyway,” said Sharma. “People want comfort and the outstanding,” said Jyoti of her collection, which used a lot of textures. She also left a window open to tweak the outfits for buyers, many of whom hailing from the Middle East and asking for sleeves to be added and dresses to be lengthened to the ankle.