At India Fashion Week, the strong Indian flavor of the shows this season suggested designers here are gaining confidence in homegrown styles. 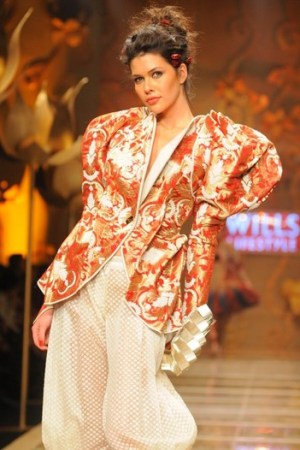 More than 100 designers unveiled their spring collections at India’s biggest fashion event. Some 175 buyers, including more than 70 from overseas, attended the shows. The event was held at Pragati Maiden, a conference center in central Delhi from Oct. 24 to 28.

And that fashion appears to be resonating with buyers, especially domestic ones. Designers said interest from Indian retailers was high this season, while foreign buyers’ budgets seemed less constrained than in the past.

The event also signaled the healing of a schism between Delhi’s designers. Last year, a breakaway group of designers organized a rival fashion week, which forced buyers and fashionistas to travel across the heavily congested capital several times a day. Now, that faction has rejoined the Fashion Design Council of India, which has organized India Fashion Week since the first event in 2001. Mumbai still holds its own shows twice a year, which showcase the work of smaller, up-and-coming designers, while Delhi pulls in the major names.

This year they included some designers that have been absent from India Fashion Weeks in recent years. Ritu Beri, one of the first Indian designers to show during Paris Fashion Week, returned to the Delhi runways after a nine-year break with a collection that was high on glamour. Flouncy, feminine dresses were teamed with wide-brimmed hats and the odd splash of simple denim on knee-high boots or jerkin jackets.

Wendell Rodricks, one of India’s most enduring designers, also returned to India Fashion Week after several years. Rodricks, known in India for his minimalism, sent models onto the runway in neat, floor-length and upper-thigh-skimming gowns of titanium white, scarlet and amber.

The sari was clearly the inspiration behind many of his longer gowns — and its influence was seen in the shows of other designers. Anamika Khanna draped her saris over pajama-style pants, while Nida Mahmood teamed saris with sneakers and jeans. Her humorous take on fusion was also evident in her line of T-shirts printed with vintage Bollywood posters.

Khadi, a rough, homespun cotton often worn by Indian politicians to symbolize their patriotism, also got a strong showing. Rahul Mishra’s Threads of Freedom collection contained structured minidresses and coats in a muted palette of ivory, gray and indigo.

But the grand finale of the week was decisively Indian. Rohit Bal sent models — and two of Bollywood’s leading actors, Ranbir Kapoor and Katrina Kaif — onto the runway in staple Indian eveningwear: sherwanis (men’s long, fitted jackets) and saris decorated with peacocks.