All brisk and youthful energy on the first day, the 22nd edition of Wills Lifestyle Fashion Week opened on Wednesday at its usual venue of Pragati Maidan. 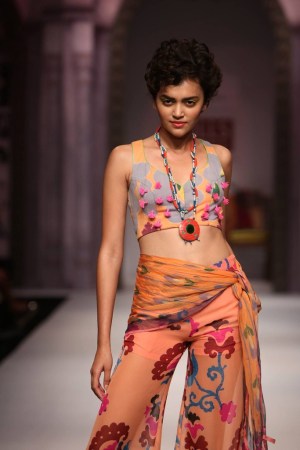 NEW DELHI — All brisk and youthful energy on the first day, the 22nd edition of Wills Lifestyle Fashion Week opened on Wednesday at its usual venue of Pragati Maidan here for a five-day run.

The designs for spring lit up the runway with bright florals, strong prints and brilliant colors, with 113 designers participating this season.

“The best thing that has happened is that designers have become aware of which genre they want to specialize in and have begun to understand that area of specialization,” Sunil Sethi, president of the Fashion Design Council of India said.

“Now there are separate shows for couture, bridal and the differences between the pret and luxury markets have become clearer and have started following the international seasons better as well,” Sethi said.

About 200 buyers were expected to attend fashion week. “The buyers are no longer trickling in with small numbers but this has become a part of their itinerary, more so for buyers from the Middle East as well as from other countries including the U.S. and Japan who say that they see real value in Indian fashion,” Sethi observed.

As in previous seasons, a partner country is exhibiting some of their designers. This time Australia is the focus. Australian designers will collaborate with Indian weavers to showcase designs.

On the runways will be some designers who have established their own styles over the last six to 10 years, including Nachiket Barve, Masaba Gupta, Nida Mahmood and Anupamaa Dayal.

Anupamaa Dayal displayed her well-known prints and flower motifs. Masaba, who has come to be known for her prints and signature black-and-white collections and who is now additionally creative director of Satya Paul, an older design house, displayed her design for a car as well as new collections of handbags and shoes.

The car was the Tata Nano that was launched four years ago, a small, budget car that Masaba redecorated inside and outside and which will be sold as a limited edition. “It was a great experience and helped me conceptualize on a completely new frontier,” Masaba told WWD.

Her show embodied the same concept of fun, with a youthful, playful silhouette. “It’s a big risk for me showing very sporty, active wear,” said Masaba. The bold prints she is known for were still there — “prints are easier to work with, they’re cost effective and work great,” she said, explaining though that “prints were going to die soon. It’s a phase, like high-waisted pants and unlike the sari, which will never go out of fashion.”

She spoke about a new Indian consumer who is embracing silhouettes and is not afraid to show their body. This was seen in the pair of shorts she paired with a black shirt with embroidery, a style that brought together different cultures — another new trend.

Nachiket Barve showed again after a break last season, taken to celebrate his marriage. He returned with a changed perspective — less of the color-rich palettes and contrasts that were his signature. This time he went with softer colors except for the final round, which were gowns in deep and dramatic red. “I wanted to end on a strong note,” he said of the red gowns, which used a variety of material including silks, organza, georgette and crepe.

Barve also discussed the “massive” transformation in the Indian market. “Earlier women invested only in clothes for weddings. Now it’s an amazing change as the focus is more on looking good every day and it has led to a strong emergence of high street design and pret,” he said.