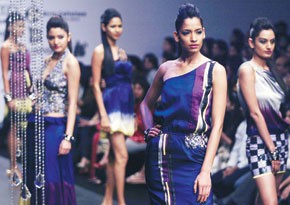 More than 80 Indian designers presented their fall collections at the five-day event March 12 to 16, according to Suneet Nair, executive director of organizer Fashion Design Council of India.

Seventy of the 150 buyers at fashion week came from overseas, he said, a substantial increase on last time.

Until about a decade ago, prêt-à-porter fashion barely existed in India. The country’s first ever fashion week was held only eight years ago, in 2000. But a booming economy — growing at around 9 percent annually — has created demand for high-end, homegrown designer clothing. And the success of a handful of Indian designers overseas has created worldwide interest in the nation’s fashion business.

India’s emergence in the world of global fashion was a popular theme at fashion week, which was held at Pragati Maidan, a crumbling concrete conference center in central Delhi. Inside, the FDCI had created an airy, elegant space filled with black-and-white furniture.

The event drew to a rousing close on March 16 with a show entitled Mode in India, a play on the “Made in India” label that has long connoted cheap and cheerful cotton clothing to Europeans and Americans.

Two designers — Anamika Khanna and Ashish N Soni — sought to buck all stereotypes of India in the show, which featured structured, textured skirts and pantsuits in opulent fabrics: satin, organza, georgette and jacquard. There was not a sari or salwar kameez, traditional Indian forms of dress, in sight.

The most popular shows during the week belonged to those who had made their marks in the global fashion business. Only a year ago, no Indian designer had ever shown at Paris Fashion Week, but in recent months, three of the country’s designers — Khanna, Manish Arora and Rajesh Pratap Singh — have done so. These also were the designers who pulled the biggest crowds in Delhi.

Their shows could not have been more different. This was typical of fashion week, where a riot of trends — even within one show — often made it difficult for buyers to get a coherent sense of what was on offer. Indeed, many foreign buyers said the designers needed to shorten and simplify their shows.

Arora, who has been dubbed “the John Galliano of India,” sent his models onto the runway dressed as fantasy warriors, in animal masks, metallic armor shields and shoulder and knee pads that glistened with Swarovski crystals. Beneath, there were flowing silk and brocade dresses, embroidered with samurai masks.

Singh’s refined European aesthetic has long made him popular overseas and his collection featured tailored pants and sharp, fitted skirts. His palette, however, was unusually colorful, including flaming orange, golden yellow, scarlet and silver.

Despite the success of a few famous names, the growing global recognition of India’s fledgling fashion business has yet to translate into big bucks. The industry here remains small, only contributing anywhere from $50 million to $250 million to the $35 billion global business, according to estimates. Indeed, around 85 percent of sales from an event like fashion week in Delhi are made to Indian buyers, said Nair.

There are signs, however, that someday this may change.

Sitting in the front rows of shows, foreign buyers said they had come to Delhi to hunt down new stars.

Alan Bilzerian, owner of the eponymous store in Boston, said he had long stocked the designs of Singh, “whose stuff is always wonderful.” But this year, he had come to fashion week for the first time to scout out new talent. “You get this sense that this is the time to come looking for new designers in India,” he said.

The challenge, he went on, is to find designers who are able to marry India’s beautiful textiles and centuries-old artisanship with silhouettes and cuts that can compete with those of Western designers.

“In my opinion, Gaurav Gupta does that brilliantly,” he said. “That guy’s got it.”

Gupta, who is based in Mumbai, studied fashion design at Central Saint Martins in London and at the National Institute of Fashion Technology in Delhi. His collection flaunted modern, sexy shapes: dresses of jersey, crepe and chiffon that were molded around the upper body and floated out at the knee. His palette was characteristically subtle, with smoky grays and sea greens.

“I don’t think of myself as an Indian designer at all. Anyone anywhere in the world could wear my designs,” said Gupta after the show. “But India definitely has had an effect on the way I drape. It must come from watching the way women wore saris when I was a child.”

Fatiha Habeti, a buyer for Henri Bendel in New York, said her favorites this season were Arora and Singh, who had created a “great collection.” Habeti also saluted the work of Kavita Bhartia, a designer who is known for mixing an Indian ethnic aesthetic with semiformal tailoring.

“Most of the other designers here are quite good and they seem to have all they need, in terms of know-how, to grow up,” she said. “There’s nothing especially avant-garde yet, though.”

Foreign buyers waxed lyrical about the textiles on display in Delhi. But many of them said Indian designers still lagged behind when it came to silhouette and cut.

Katsuhiro In, a buyer from the trendy Beams store in Tokyo, was at fashion week for the first time, looking for future stars. “The colors are beautiful and the fabrics are good, but the design sense needs to be improved,” he said, adding that he would be back.

Bilzerian, who said he was making around $50,000 of purchases in Delhi this season, also said he expected this to be the first trip of many. “The market’s still in its diapers,” he said. “But soon it’s going to get up and run around.”