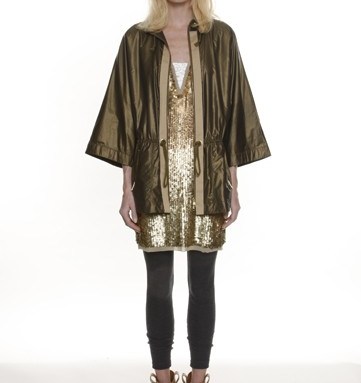 NEW YORK — It’s a new year and the high-end apocalypse predicted by some retail pundits hasn’t materialized. The luxury business is still alive, albeit maybe not kicking. Companies are digging through the rubble of 2009, trying to glean some lessons and decipher meaning from the customers’ handwriting on the dressing room walls. That is, if shoppers even venture into dressing rooms anymore. The online sector did well in the most recent holiday period, leading retailers to the conclusion that luring shoppers into stores may become more difficult.

Speaking on a panel “The New Luxury Paradigm,” at the National Retail Federation’s 99th Annual Convention and Expo, Stephen I. Sadove, chairman and chief executive officer of Saks Inc., said it can be done. “There are a lot of lessons to be learned from Fashion’s Night Out,” he said. “We had no idea if it was going to work. We had 40,000 to 50,000 people show up in the store that day — with no discounts.”

Another panel member, Tory Burch, creative director of Tory Burch LLC, said, “Luxury is not about excessiveness and overdoing it and being gaudy. It’s about elegance.”

“They [customers] want to touch and feel,” said Sadove. “That hasn’t changed. What has changed is their expectations. Look at the Louis Vuitton ads now showing workmanship. It’s a justification of what makes that brand special. The new [luxury] paradigm is getting to know the persona of the brand.”

Sadove agreed, relating an experience with Facebook, which left him cold. “I went on to Facebook and within five minutes, I had 50 friends,” he said. “I got scared.” Another reason he dislikes the medium: When he recently went on vacation to Mexico with his family, he saw pictures of himself on the beach plastered all over the Internet. Sadove vowed not to tweet, but Burch said the unpleasant experience of being tweeted about ­— barefoot in an airport in the security line — led her to design a travel sock for women.

Several panelists mentioned the film “Avatar,” particularly the 3-D version, and cited lines from the movie, “You can’t teach people how to see” and “You have to see before you feel.” “It’s about the intimate connections between nature and people,” said Marc Gobé, president of Emotional Branding LLC. “It’s the power of social media. Three-D is augmented realities. Technology is the new luxury. Look at the success of Under Armour — it’s the science and technology behind the brand.” Gobé believes that “3-D technology and science are bringing innovation and incredible design to products. Creating dynamic social media can really change the product.” Young people are not content simply with buying the latest high-tech gadget, Gobé said. They’re looking for meaning beyond the LCD displays. “Gen-X and Gen-Y are on the same [page]. The Baby Boomers are worrying about unmet dreams, possibilities that will never exist for them. The new generation is about quality. They’ve inherited pollution. They want to live their lives in a more responsible way.”

“Everybody says that the spending now is against electronics,” Sadove said. “When there’s innovation, the customer wants it. This past holiday season, 50 percent of consumers bought apparel.” Moderator Dana Telsey, ceo and chief research officer of Telsey Advisory Group, asked, “How do we differentiate?”

“Part of it is product,” Sadove said. “About 25 percent to 30 percent of our product can’t be found anywhere else. The relationship between customers and associates is another thing. We have the products and brands people want, edited in a way that’s very Saks.”

Telsey asked the panel what they would say if they reconvened a year from now. “We’ll say that it was a better year,” Sadove said. “It will be a tougher first half with positive momentum in the second half. We saw an enormous falloff in men and women shopping. Women have come back quicker. Men’s casual and sportswear is back before tailoring.”

“We’re selling three times more accessories than apparel right now,” Burch said, “and handbags are selling as well as footwear. It’s about updating an outfit and not having to go all the way.”

“Prior to last September, it was a little bit of ‘We’ll give you what we want to give you,’” Sadove said of vendors. “It has changed. [Saks] cut receipts by 25 percent last year. The collaboration [between retailers and designers] is more important than ever before. We have an area of new bridge called Wear, where we have a whole plethora of brands that we didn’t have before. That’s the future.”

“It’s a new landscape and we’re all learning,” Burch said. “It’s not ever going back to where it was.”