The ambassador for French chic is opening the first store for her relaunched brand on the Left Bank. 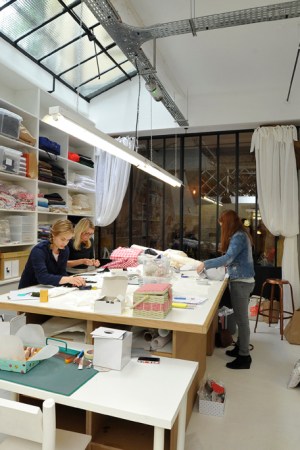 PARIS — Inès de la Fressange is back on the retail scene.

Sixteen years after the loss of her brand name and the closure of her first namesake store in Paris, the ambassador for French chic is marking a major step in the revival of her line with the opening of a Left Bank store that houses her branded products alongside an assortment of handpicked goods ranging from olive oil to bicycles.

The 2,150-square-foot store at 24 Rue de Grenelle is housed in a former bronze foundry that has been painstakingly restored to preserve original elements, including a glass roof and Napoleon III-era cabinets with glass doors.

“This place hasn’t changed in 100 years,” marveled de la Fressange on the eve of the boutique’s official opening, as she picked her way through racks bursting with the first items from her fledgling ready-to-wear line.

The space is the first to bring all her licensed products, which include shoes, eyewear, jewelry, scarves and stationery, under one roof. But the Roger Vivier and L’Oréal brand ambassador wasn’t content just to showcase her wares, deciding instead to make the store a 3-D version of her best-selling style guide, “Parisian Chic.”

In the spirit of an ultrachic bazaar, the store offers an eclectic assortment including Tunisian-made ceramics and wooden spoons from Tinja; household linens from Linge Particulier; André Jardin brooms, and colorful plastic gadgets ranging from Bambi-shaped soap dispensers to Dachshund-shaped pens.

“I wanted a place where you could find things at every price point, either for yourself or to gift,” de la Fressange explained, noting that the cheapest item is a curved hook priced at 1 euro, or $1.10 at current exchange rates.

The novelty is the presence of a glass-walled workshop at the back of the store where an in-house team of designers and seamstresses, led by head of design Fleur Demery, develops the prototypes for the ready-to-wear and handbag lines, making their worldwide debut at the store this week.

De la Fressange last year launched an ongoing clothing collaboration with Japanese retail giant Uniqlo, but her own collection is as limited edition as they come, explained Fabrice Boé, chief executive officer of Inès de la Fressange Paris, which he relaunched in 2013 with a group of investors.

“Almost without exception, all of our items are produced as numbered limited editions,” he said, noting they go from custom-made pieces like the evening gowns that de la Fressange wore to the “Mad Max: Fury Road” and “Irrational Man” premieres at the Cannes Film Festival to items produced in limited runs of up to 200 pieces.

“It’s the spirit of haute couture made available to everyone,” Boé added. “We want to make the prices accessible, so they really reflect the cost and quality of the products, and not the snobbery of a designer price tag.”

The idea is to present a selection of around 60 basic items, such as vintage-style dresses, ruffle-neck blouses or cropped trousers, in constantly changing fabrics. “I buy either limited-edition vintage fabrics or leftover fabrics from designer collections,” de la Fressange explained.

Some of the looks — like gingham dresses or floral-patterned blouses — have an unashamedly retro feel that evoke the golden era of post-war Paris, when surrounding Saint-Germain-des-Prés was the center of a vibrant artistic and literary scene.

“I adore the clichéd image of Paris — Amélie Poulain, Montmartre, ‘Ratatouille’ and all that. I love the cliché of the beret and baguette – it doesn’t bother me at all,” said the former face of Chanel, adding that her Forties-style tea dresses were just the kind of thing a woman might wear for a romantic stroll across a Paris bridge.

Sales associates will dispense advice on how to achieve that elusive Parisian je ne sais quoi.

“Nowadays, you can find anything on the Internet, but what you don’t get online at 3 a.m. is advice, lifestyle and this almost handcrafted aspect,” she explained. “What feels modern these days is old-fashioned service, and so it’s fitting that the decor is also antiquated, because it almost feels like a family home.”

Boé said the store would provide the template for freestanding retail units in other countries.

“This is the place where you can see for the first time the brand as we wish to present it,” he said. “The idea now is to deploy this worldwide, ideally with partners, by opening monobrand stores in big cities worldwide and then by distributing the brand via multibrand retailers like department stores or concept stores.”

The brand will soon add home furnishings to its product offering and is in talks to develop children’s wear, home wares and luggage, the executive added.