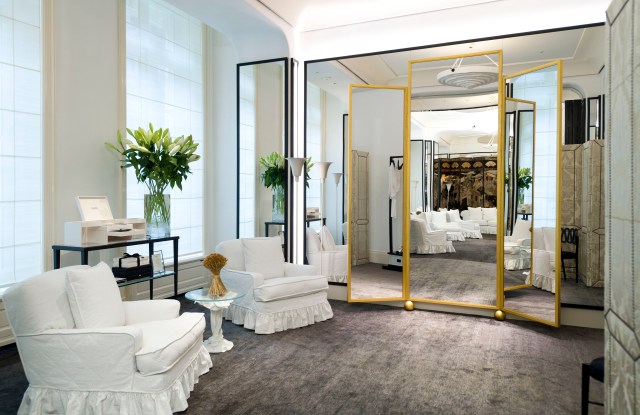 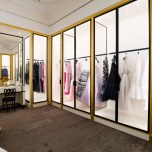 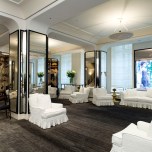 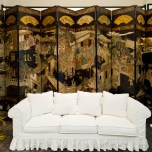 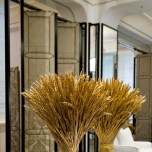 PARIS — After a 50-year career of decorating the homes of the great and the good, not to mention designing some of the world’s most prestigious hotels, Jacques Grange has at last secured his first commission for Chanel.

The interior designer, a member of Yves Saint Laurent’s inner circle who designed all of the late couturier’s homes, was a longtime friend of Chanel’s former artistic director Karl Lagerfeld, but after an infamous falling out between the Saint Laurent and Lagerfeld camps in the 1970s, working together was off the table.

Following the death of Saint Laurent’s partner Pierre Bergé in 2017, Lagerfeld put out feelers via a mutual friend. He wanted Grange to redecorate Chanel’s historic haute couture salon, located at 31 Rue Cambon in a building that also houses the apartment of founder Gabrielle “Coco” Chanel.

“We found the theme in 20 minutes, and Karl said ‘yes,’” said Grange, sitting in an armchair upholstered in topstitched white canvas in the salon, located on the first floor of the building, where Chanel set up shop in 1918.

Part of a broader renovation of Chanel’s headquarters that has transformed an entire section of Rue Cambon into a construction site, the project took 24 months to complete. Lagerfeld passed away in 2019, meaning he did not see the plan come to fruition, but his successor Virginie Viard was closely involved from the start.

Working from old photographs, Grange decided to restore the original volumes of the space, dominated by a mirrored Art Deco staircase so famous that France’s Culture Ministry has declared it a historical monument. This is where Coco Chanel, cigarette in hand, would perch to watch her fashion shows, unseen by the audience.

After giving the modernist staircase a refresh, Grange re-created the room’s original curved ceiling, and added tall mirrors to the columns. In one corner, he placed an oversized Coromandel lacquer screen, reminiscent of the ones in Chanel’s private rooms upstairs, which he is also in charge of renovating.

A gray mottled silk carpet and white lighting fixtures, designed by Patrice Dangel, set off furniture ranging from a copy of a 1930s-era glass-and-metal console rescued from a Chanel boutique, to a white ceramic console table by Italian sculptor Giuseppe Ducrot, alongside resin-and-glass pedestal tables by Greek artist Marina Karella.

Oversized sofas and armchairs upholstered by Decour add a cozy touch to the space, while side tables with gilded bronze legs in the shape of wheatsheaves recall the original made for Coco Chanel by Goossens, one of the dozens of Métiers d’Art houses acquired by the French luxury house in recent years to preserve their know-how.

There are three spacious private fitting rooms separated by folding screens covered in studded gray damask. In a back room, colorful dresses from Viard’s spring haute couture collection are displayed in glass cabinets with gilded frames that echo the gilded wheatsheaves dotted around the room. In front of a dressing table sits a black Gio Ponti chair.

Last week, the salon hosted its first cultural event, a talk led by Charlotte Casiraghi, who recently joined Chanel’s stable of brand ambassadors. The first of a series, titled Literary Rendezvous at Rue Cambon, it focused on the German-Russian writer and psychoanalyst Lou Andreas-Salomé, and is available as a video and a podcast.

Grange could write a fascinating memoir himself, if his busy work schedule permitted it. With clients ranging from billionaire François Pinault to Casiraghi’s mother, Princess Caroline of Monaco, he is a walking encyclopedia of design history and Paris society, with a treasure trove of gossipy anecdotes.

He met Coco Chanel just once. “It was at the premiere of ‘Belle de Jour,” which I attended with Marie-Laure de Noailles. Chanel was with Salvador Dalí,” he recalled. But Grange had always gravitated in the Chanel orbit: he decorated the home of her biographer, Edmonde Charles-Roux, and noted that Saint Laurent was strongly influenced by her aesthetic.

“Chanel was an absolute genius,” he pronounced. “She had incredible taste, because she created her own highly personal style, with a mix of baroque and modern.”

Nowhere is that style personified better than at 31 Rue Cambon, which is also home to a Chanel boutique on the ground floor; the design studio on the third floor, and the haute couture ateliers on the upper floors, where seamstresses make made-to-measure outfits for a handful of wealthy women.

Each outfit takes between two and three months of work, with a minimum of 200 hours for a jacket to thousands for an embroidered wedding dress. Despite all the restrictions imposed by the pandemic, it remains Chanel’s only haute couture address worldwide, acting like a magnet for the house’s VIP clientele.

Known for his deft blending of contemporary and classical references, in locations including The Mark Hotel in New York City and the Cheval Blanc in St. Barths, Grange said he was happy to delve into the universe of Chanel, especially since she was a lifelong supporter of the arts.

“Respecting the client is an important part of my job. It’s the basis for my work. What I’ve done here, I wouldn’t do for anyone else. It’s really Chanel. I don’t want it to become an ego trip,” he said. “I was just focused on the job at hand, and all the little details. Karl was a perfectionist, and so am I.”