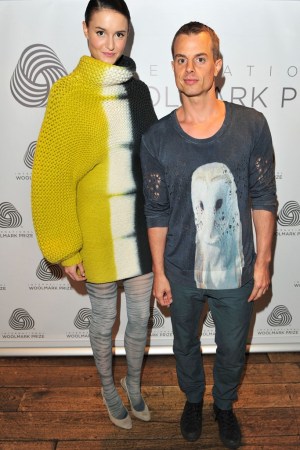 “I feel like Heidi Klum!” said Alber Elbaz, who took to the stage in London on Thursday to announce the European regional winner of the International Woolmark Prize. “One of you will win. You’re either in — or you’re out!” he said, mimicking the model who hosts “Project Runway.” “Honestly, the debate was extremely heated — so those who didn’t win, please don’t take it too hard.”

Elbaz handed the prize to 34-year-old Belgian designer Christian Wijnants, whose winning design was a chunky sweater dress made to look as if it had been tie-dyed. “I am very, very surprised and honored. The other candidates were really great and I am happy to have participated,” the designer said. Wijnants shows his ready-to-wear collection in Paris and has more than 60 stockists around the world, including Colette. Judges, including British Vogue editor Alexandra Shulman and designers Giles Deacon and Dean and Dan Caten, chose from among 17 designers across 11 European countries, all of whom were asked to create designs using merino wool.

As reported, regional design contests are taking place this month in China, Australia, India and Europe. Winners will receive $50,000. Sophie Theallet won the U.S. award and $100,000 earlier this week. All of the regional winners will compete for the International Woolmark Prize, which will be given in February during London Fashion Week. That winner will receive an additional 100,000 Australian dollars, or $101,966.61 at current exchange, to assist them in underwriting their next fashion show. In addition, the winning designer will have his or her collection sold to key retail partners such as Harvey Nichols in the U.K., Lane Crawford in China, Eickhoff in Germany and Bergdorf Goodman in the U.S., beginning in August 2013.

The global fashion competition awards outstanding and emerging designers for their creativity in merino wool. The contest aims to develop the next generation of fashion designers and to highlight wool’s eco credentials.