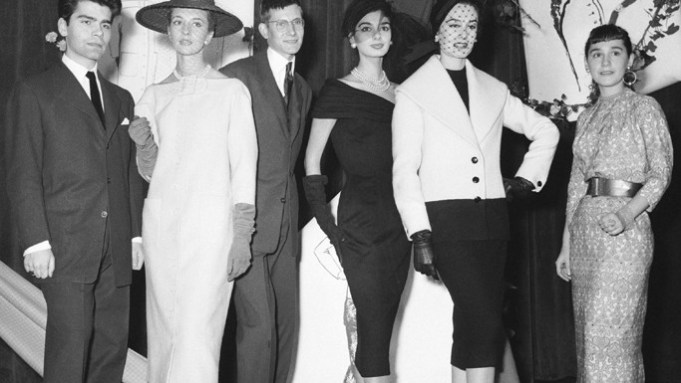 The International Woolmark Prize is making a comeback.

The global fashion competition, which famously was a springboard for the careers of Yves Saint Laurent and Karl Lagerfeld in the Fifties, will be reintroduced this year with the aim of supporting individual excellence in design. The International Woolmark Prize awards outstanding and emerging designers for their creativity in merino wool. The contest aims to develop the next generation of fashion designers and to highlight wool’s eco credentials.

Stuart McCullough, chief executive officer of Woolmark, told WWD that regional design contests will take place in the U.S., China, Australia, India, Italy, the U.K. and France. The winner of each region will receive a financial contribution towards their next collection, as well as an opportunity to participate in the international final. The winner of the international final will receive 100,000 Australian dollars, or $103,963 dollars at current exchange, to assist them in underwriting their next fashion show. In addition, the winner will have their collection sold to key retail partners such as Harvey Nichols in the U.K., Lane Crawford in China, Eickhoff in Germany and Bergdorf Goodman in the U.S.

The regional finalists will be revealed in July. The regional winner will receive $100,000 in the U.S., and $50,000 in the other regions. The international winner will be unveiled in February 2013, and his or her merchandise will go into stores in August, 2013. Woolmark has budgeted this annual award for the next four years. “We wanted to make sure it had continuity and we wanted to set the platform for years to come,” said McCullough.

He considers the Woolmark Prize a significant marketing project to spread the word about wool and what can be done with wool in a design sense. “We know through the fashion arena, it attracts a lot of attention. It’s an important way of [touting] the fiber,” he said.

“There’s a lot of history with the award,” said Steven Kolb, chief executive officer of the CFDA. “When Woolmark met with us we looked at the opportunity on a number of different levels.” Not only did the award carry a substantive prize with it, but there was an appealing retail component for the winner. The prize also allows participants to learn more about the technical aspects and value of wool. Kolb said the contest was open to CFDA members (members have to be in business at least three years), and that it would be great to see the U.S. winner compete internationally. “It says a lot for how far American fashion has come,” he said.

The CFDA has received about 25 initial inquiries. He said that those who are applying are not only young emerging designers “but a brand who could use a boost.” He said the prize wasn’t for marquee brand names, but rather small business owners.

Simon Ward, chief operating officer of the British Fashion Council, said, “When the award was first introduced, Yves Saint Laurent and Karl Lagerfeld were among the first winners, and at the time they were young, emerging talents. What we like is that there is a symmetry and a parallel with the past in these latest Woolmark awards. In London in particular, there is so much new and emerging talent, so there was a large pool to choose from.”

Ward said the criteria for the candidates was drawn up by Woolmark, and the BFC chose candidates for their creativity and the way they use wool in their designs. “It’s appropriate that Woolmark should be working with, and supporting the new talent of today and following their potential for growth — they are a great partner,” Ward added.

The U.K. has become something of a hotbed for wool promotion: For the past two years, London has played host to Wool Week, an initiative that touts the benefits of the natural fiber, the price of which has steadily declined over the past decade. The week is part of the Campaign for Wool, a five-year initiative dreamed up by Prince Charles and supported by industry figures including Nicholas Coleridge, managing director of Condé Nast in the U.K. and a spokesman for the campaign. Past Wool Weeks have seen sheep grazing in a makeshift meadow on Savile Row or dyed a shade of bright yellow and gathered in a flock outside Selfridges.

Didier Grumbach, president of the Chambre Syndicale, said that he was very happy about the return of Woolmark to the fashion scene. The firm had a big presence in Paris in the Sixties, he said, adding that it brings back good memories. Already the company recently has been building up its presence in France as a sponsor of young talent-related events, he added, such as for the live screening this weekend at the Palais de Tokyo of the fashion show from the Hyères International Festival of Fashion and Photography. Grumbach said that the details of Paris’ role in the new International Woolmark Awards is still to be defined, however. “I hope it will be long-term,” he said.

The Australian Wool Industry has supported numerous designer programs dating back to the illustrious International Wool Secretariat design award of the Fifties, where Saint Laurent and Lagerfeld were discovered. More recently, in 2007, the Protégé program teamed up some of the world’s most established designers, such as Lagerfeld and Donatella Versace, with young protégés of their choice.

In the U.S., the judging panel consists of the CFDA’s Kolb; Linda Fargo, senior vice president of the fashion office and store presentation at Bergdorf’s; Sally Singer, editor of T, the New York Times Style Magazine; Narciso Rodriguez, and Malcolm Carfrae, executive vice president, global communications at Calvin Klein Inc. Franca Sozzani, editor in chief of Italian Vogue, and Diane von Furstenberg are confirmed to be on the international judging committee. The U.S. judging will take place on July 9 in Manhattan. Designers are required to present sketches of a merino wool capsule collection comprising six outfits with one full outfit to be produced.

The contest, including the winners, will be communicated through print media as well as a large digital component.

The Woolmark Co. owns the Woolmark logo, which is one of the world’s 10 most well-known and respected apparel-related brands in the world. Over 2 billion garments have carried the logo since its creation in 1964. To feature it, the garment must contain 100 percent pure new wool and meet strict quality and fabric performance criteria. The Woolmark Co. is a subsidiary of Australian Wool Innovation Limited, a not-for-profit company owned by 30,000 Australian woolgrowers.

According to McCullough, 85 percent of the world’s wool, used for apparel, comes from Australia. “The versatility, renewable and biodegradable properties of wool are well communicated,” he said. Wool consumption has been on the upswing, thanks to the emergence of affluence in China. “Our challenge is to demonstrate that it can be used in luxury garments. It’s not just the fiber that was used in sweaters that your grandmother used to knit you that itched and scratched you a bit,” said McCullough. He said there are new properties in wool that give it a great hand. Eighty percent of Australia’s wool is exported to China. Some 50 percent is consumed there, and 30 percent is exported. The next two largest markets are Italy and India.