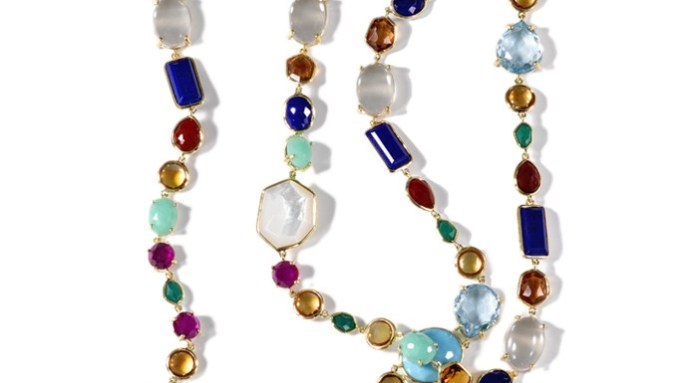 NEW YORK — Ippolita is embarking on a new frontier.

The 13-year-old fine jewelry company, which has been confined to the jewelry cases of upscale retailers such as Neiman Marcus, Bergdorf Goodman, Harrods and Lane Crawford, is opening its first store in New York this September.

Located in the old Damiani space on Madison Avenue between 67th and 68th Streets, the store is the first of 12 doors set to open in the U.S. within the next three years.

While the first space will be just 500 square feet, subsequent doors will ideally be double that size, and be located in Los Angeles, Miami, Chicago, Dallas, Houston and Atlanta.

“The business has been really on a tear the last few years,” said Ippolita chief executive officer Joe Cavalcante. “The economic downturn in 2008 was really great for the brand. We’ve taken a lot of share and we’ve had a ton of growth.”

While Ippolita began with 18-karat gold, diamond and gemstone-based jewelry, it branched out four years ago with collections in silver and rosé, which is a combination of rose gold and silver that acts as a bridge line between its silver and gold collections.

As a result, Ippolita became more accessible and it quickly gained a following for its wearable yet fashion-driven designs, said Cavalcante, who chalked the brand’s success during the recession to “luck.”

That may be a tad too modest.

Drilling deeper, the ceo said the New York-based brand launched a silver line with Saks Fifth Avenue during the first half of 2008, just before the economy crumbled.

“All of our competitors scrambled to put out silver lines. We were ahead of the market in getting a better-priced product out there,” he noted. “Our silver business helped us get out of it [the recession].”

The brand’s silver collection averages $500, although, with an improving economy, Ippolita has added diamonds and semiprecious stones to its designs, bumping up the price. Sales growth since 2008 has been “fivefold,” according to the ceo, who declined to provide a sales volume estimate. He did, however, note that despite the brand’s “significant” sales progress, the company has “no plans” to go public.

Even though the brand is gaining major traction, Cavalcante expressed the need for caution, as the economy is still wobbly.

Case in point: While Ippolita’s gold jewelry business has also grown, albeit at a slower pace than silver, the company started hedging in 2010 in order to protect it from erratic swings in the price of gold.

“What’s easy is very expensive jewelry or less expensive,” the ceo said, explaining how the economy has squeezed its mid-range customer.

The high-end shopper is still out there and Ippolita is capitalizing on that. As part of its growth strategy, the New York-based brand is in the process of developing higher price points for the “true luxury consumer,” according to Cavalcante, who referenced a $20,000 18-karat gold and gemstone necklace that has been hard to keep in stock, as an example.

Additionally, the brand is growing its distribution base internationally, beginning with a strong push in the U.K. this year. Subsequently, the brand will expand its business in Latin America, South America, the Middle East and Russia by early 2013.

Although the ceo admitted that there’s a “bit of a worry” when it comes to economic volatility in the U.K. and Europe, he switched gears back to the vitals for any company, namely, the merchandise.

“With our brand in particular, we feel like we are onto something and we’ve cracked a new niche in the market,” he said. “Ippolita is a line for women by women, and those women are consuming our product like fashion jewelry.”