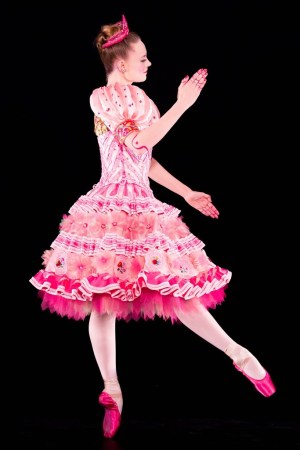 In designing costumes for “A Dancer’s Dream: Two Works by Stravinsky,” Irina Kruzhilina knew any sort of regular routine was never going to cut it.

Aside from being the New York Philharmonic’s season finale, last weekend’s performance combined music, dance, animation, video, puppetry and circus acts — and it was filmed to be screened in movie theaters, performing arts centers, libraries and schools around the globe in September. First off, the costumes had to be designed before the puppet master could begin to build the puppets, since they were based on the costumes. The last costume was finished three days before the first performance. “There were only two dress rehearsals — the first one and the final one,” she said.

Last November, Kruzhilina started poring over books in the design library and creating story boards before creating 18 costumes. For the pre-filming in March, the costumes were completed and photographed, and the images were then mounted on cardboard so that the puppet making could begin. New York City Ballet principal Sara Mearns’ creations called for some serious handwork — a team of craftspeople spent four full days creating the 36 origami flowers that graced one of her costumes. Marianne Krostyne’s Pittsburgh studio proved to be invaluable, as did a draper who made frequent trips to New York and a Virginia company that handled the intricate laser cutting for the skirt that Mearns’ Ice Maiden character wore. In total, a team of 20 had a hand in seeing things through, though Kruzhilina shouldered the bulk of the work. The Russian-born Kruzhilina accented the costumes with hats, scarves and other finishing touches she picked up during her trips to her native Russia, Serbia and Eastern Europe.

Reached on Shelter Island Tuesday while taking a breather after the show’s sold-out three-day run, Kruzhilina said, “It has been a long journey. These are truly couture dresses, not costumes. There was so much hand sewing, hand cutting and hand gluing. We worked for countless hours. I literally worked on the show for half a year. It was worth every second and every little detail.”

While getting her master’s in fashion design at the Textile University of Moscow, Kruzhilina’s professors suggested that her designs were better suited for the stage than the runway. Thankful for the creative freedom that director Doug Fitch, choreographer Karole Armitage and producer-video director Edouard Getaz granted her, Kruzhilina said that her work is a constant collaboration. “I’m never alone,” she said. “Costume design and fashion are two different worlds. In a way, that’s unfortunate. One thing about theater is it is a very collaborative art.”

Even her Upper West Side home life is that way. Her husband Thijs Beuming pitched in with the exhaustive research and 36 storyboards. Kruzhilina said, “My husband often takes action. He can’t live in this house and not be involved.”

In two weeks, she will join the director Lars Jan at The Experimental Performing Arts and Media Center, or EMPAC, at Rensselaer in Troy, N.Y., where they will experiment with engineers to figure out a way to stage his “Holoscenes” performance in aquariums. Meant to capture different types of everyday behavior from all over the world, the piece will feature video clips of people filmed in random countries brushing their teeth, praying and going about their daily routines. The aim is to have a 24-hour, 24-day performance with 24 live performers who must navigate the rising and ebbing water in the aquarium. Kruzhilina expects the project will be at least a two-year undertaking that will result in aquariums being built as installations at the Museum of Modern Art in New York and in other cities. “It’s about everyday behavior and how everyday behavior changes with what’s going on with nature and in the world,” she said.

She is also working on a production of “Masquerade” that will be staged by Russian Drama Theater in Azerbaijan in November. But for the next day or two she will hold onto the memory of “A Dancer’s Dream,” which she took in from a healthy distance. “I try to sit as far back as I can rather than give notes to my cast and crew. It’s rather stressful for me to be an audience member. I usually can only let go at the last performance.”