Dutch-Iranian singer Sevdaliza and Houdini animations all figure in her next collection. 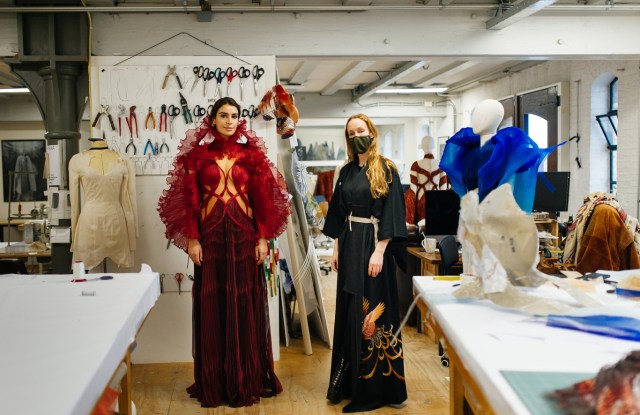 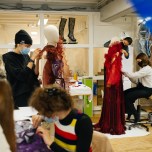 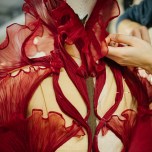 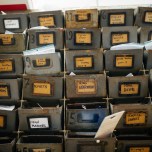 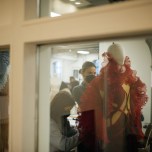 When WWD photographer Kuba Dabrowski visited Iris Van Herpen’s Amsterdam atelier earlier this month, he encountered Dutch-Iranian musician Sevdaliza in the midst of a fitting — and a wall of scissors and pliers so vast it would put any hardware emporium to shame.

Van Herpen laughed when asked how many pairs she counts in total. “I have no idea,” she said. “But we bought a special machine for sharpening them because here they are used so intensively.”

Indeed, the designer probably pressed her scissors into service more than her 3D printers for her dazzling spring 2021 couture collection, whose feats of haute dressmaking include pleated silk hand-twisted to create the cage-like structure hugging Sevdaliza’s torso.

“I just put on her latest album and I started draping, so it’s a very intuitive process. I wanted the garment to grow around her,” said Van Herpen, who collaborated with a small Italian workshop for the irregularly pleated fabric.

Sevdaliza’s dress is inspired partly by the ghost mantis, a small insect with a leaf-like body that offers miraculous camouflage. Fungi are another key reference this season. The skirt of Sevdaliza’s dress mimics the gills and rings of mushrooms.

Van Herpen has been boning up on research that suggests plant life communicates via a complex underground network biologist Merlin Sheldrake dubbed the “wood wide web” in his book “Entangled Life.” 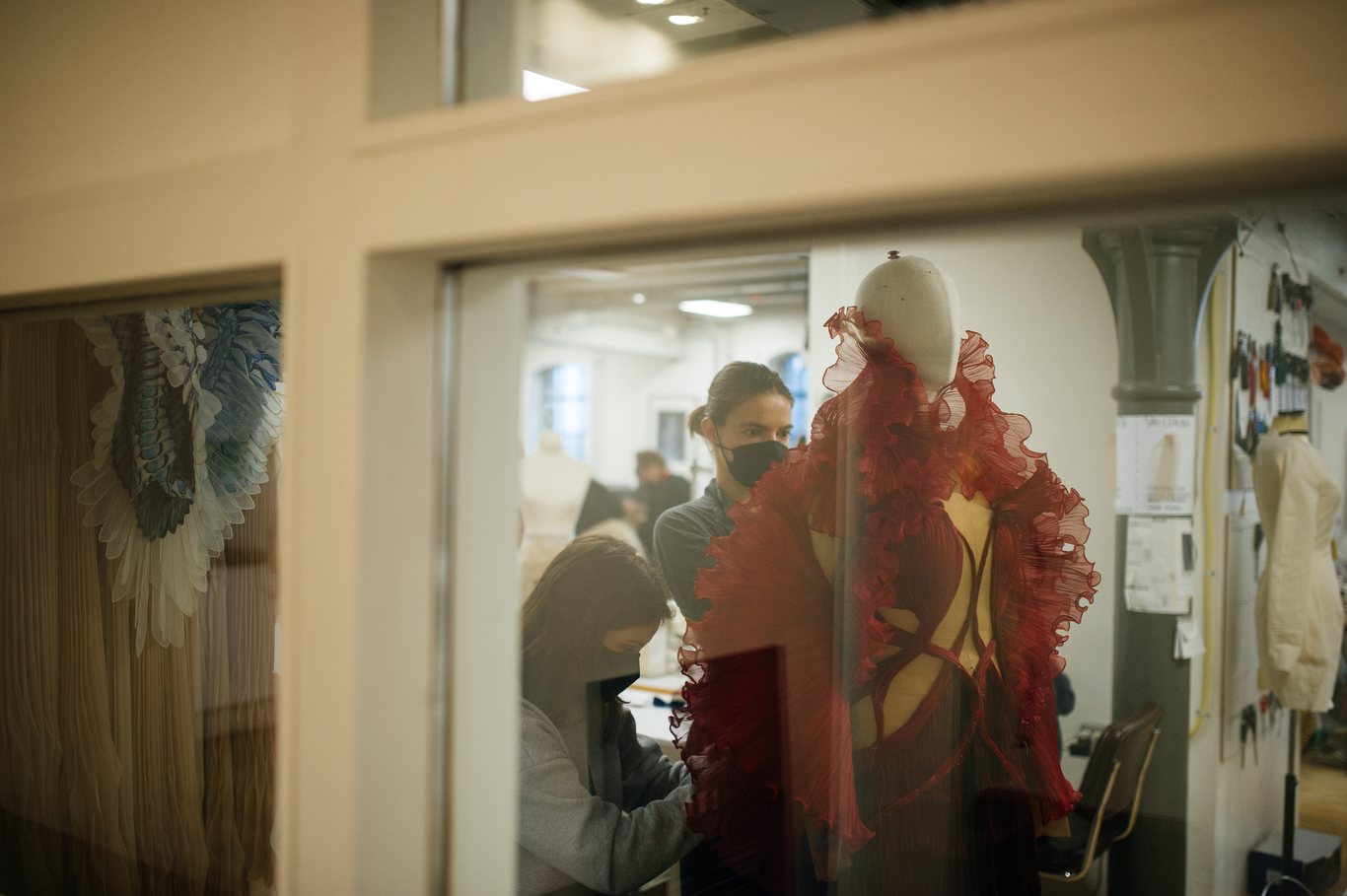 “It’s the oldest form of life. And they refer to it as the brain of the earth,” Van Herpen explained in an interview over Zoom. “Almost every plant, every tree is aligned on it.…It’s really the way plants communicate together, and also help each other with nutrients.”

After the very trying year 2020, the designer’s mind went to rebirth and transformation. “I want to go into the direction of how we can transform and learn from this fragile interconnectedness within nature,” she explained.

She drew links between the mantis’ ability to mimic its environment to Sevdaliza, whose strong features, athletic physique and edgy videos “break boundaries of what to expect from femininity.” In her clip for “Human,” for example, Sevdaliza does a striptease in front of a crowd to reveal legs resembling a horse.

“She’s really breaking those boundaries in what to expect of being female,” Van Herpen enthused.

Sevdaliza and Russian model and philanthropist Natalia Vodianova were among the famous faces featured in a film melding live runway modeling overlaid with Houdini computer animations. 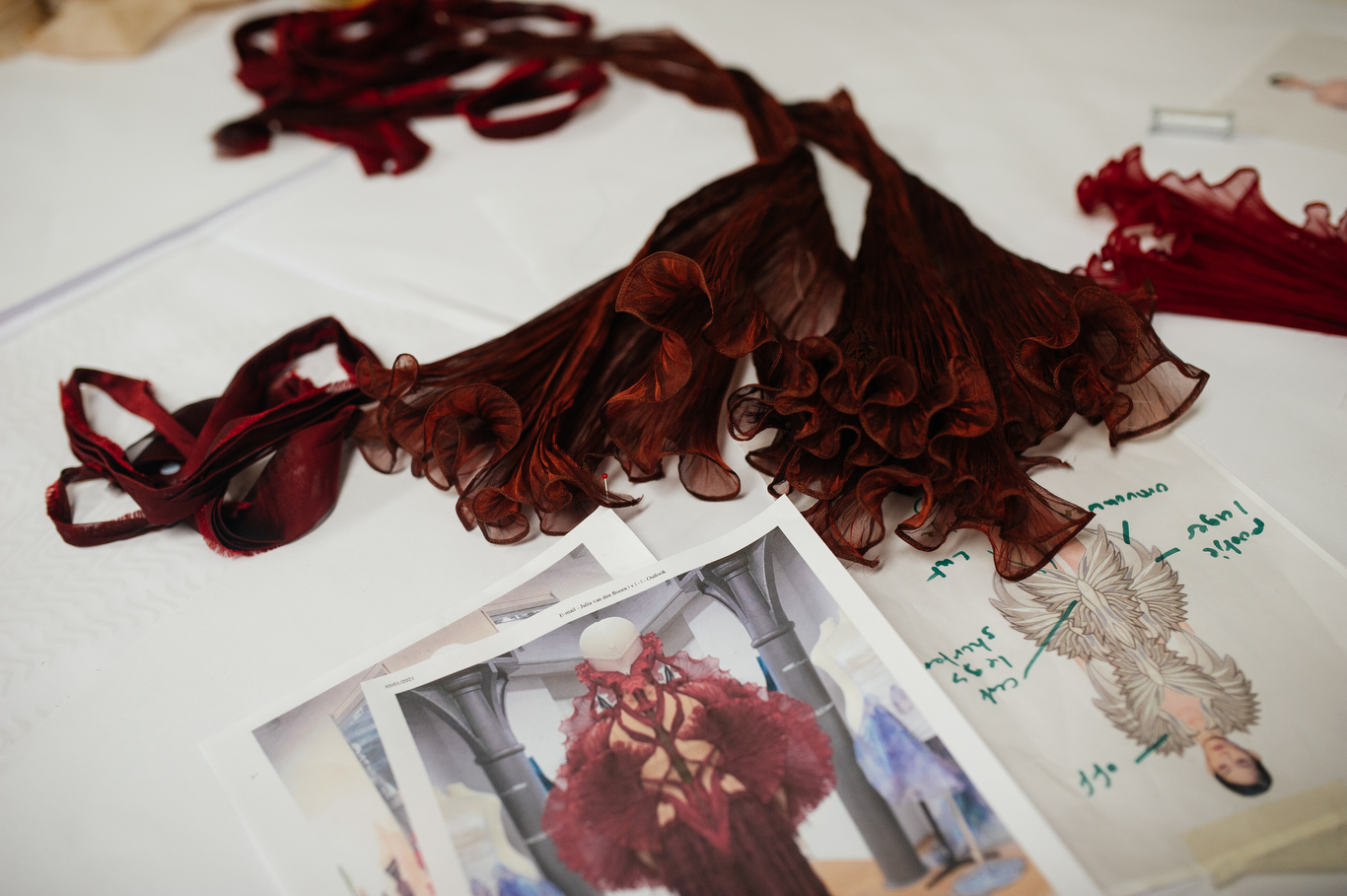 There will be other high-tech marvels, too, including two delicate, kinetic headpieces done in collaboration with Casey Curran, an artist based in Seattle, that the designer likened to jewelry for the face, and as complicated as a mechanical watch. “They took over a year to make. It’s one of the most insane things we’ve ever done,” Van Herpen said.

A conversation with Van Herpen veers from obscure science and virtual reality technology to painstaking craft, all elements of her otherworldly designs. Besides all those scissors, her studio boasts industrial drawers for rivets, copper eyelets and test buttons. “And you’ll also find clay and sculpting tools we use to make molds for 3D printing,” she noted.

Van Herpen called 2020 a challenging year, and travel restrictions made it difficult to hold fittings with her clients, who hail “from all over the world.” She said she managed via video calls, but hopes to be able to receive her devotees in Amsterdam or Paris again soon. 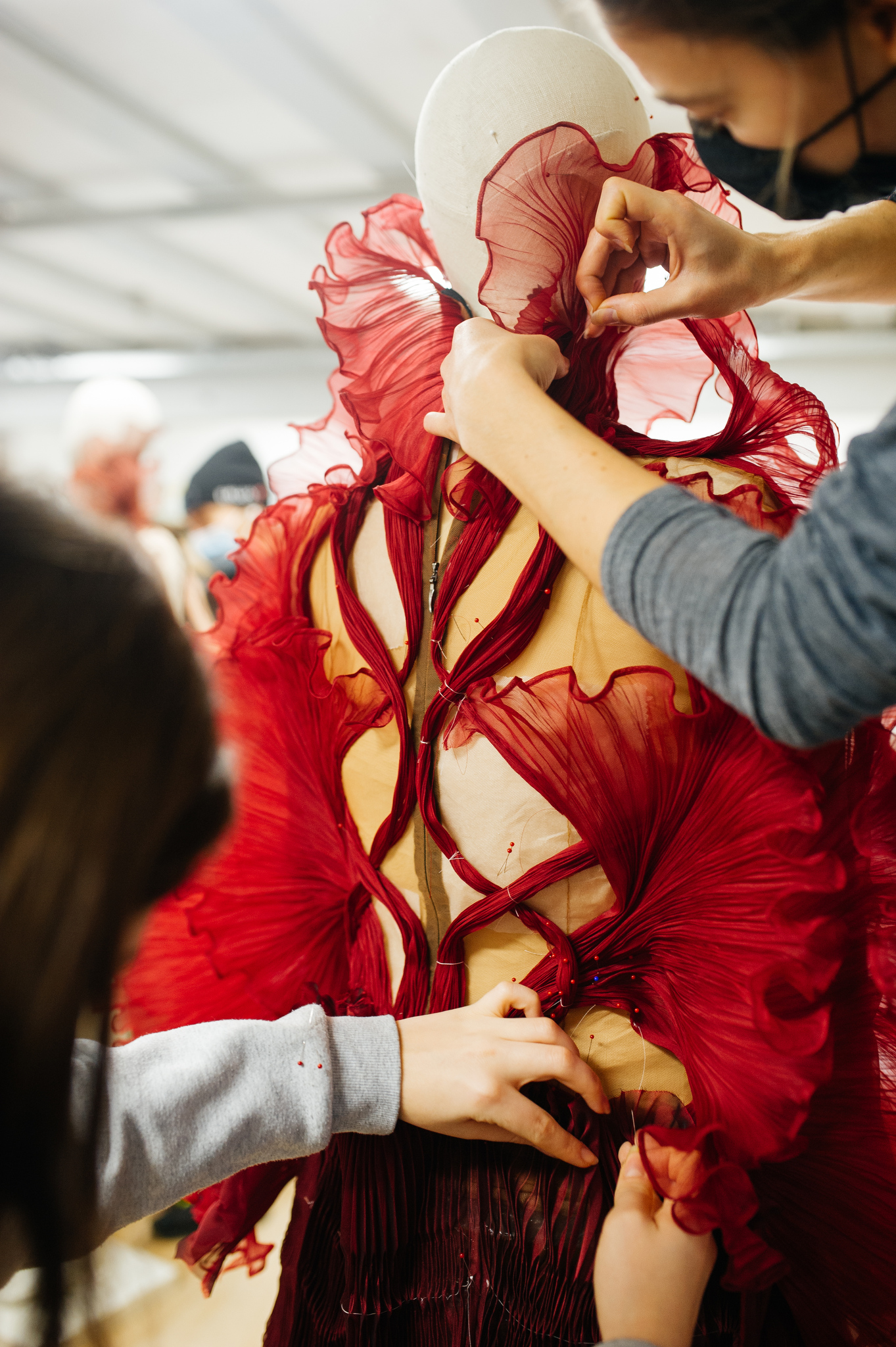 “Often we make several looks for one person. So it’s really like a friendship. It’s so fundamentally different than ready-to-wear as we know it today,” she said. “It’s women that I get very close to, that I really admire, and that I can build relationships on a personal level, and can translate that into design. That is a rarity. That makes me want to do fashion. Because it’s more than creating a product. It’s really creating a personal experience for someone.

“My label really stands for couture and the philosophy behind it, that we should buy less. I think it’s better to have some special pieces than a huge amount of clothing,” she continued. “It’s a piece that you buy for life, and to give to your daughter afterward. It’s an important way of valuing fashion.”

Van Herpen’s fashion universe could be listed in a dictionary as the opposite of disposable fast-fashion and athleisure, though she had her moments during lockdown. 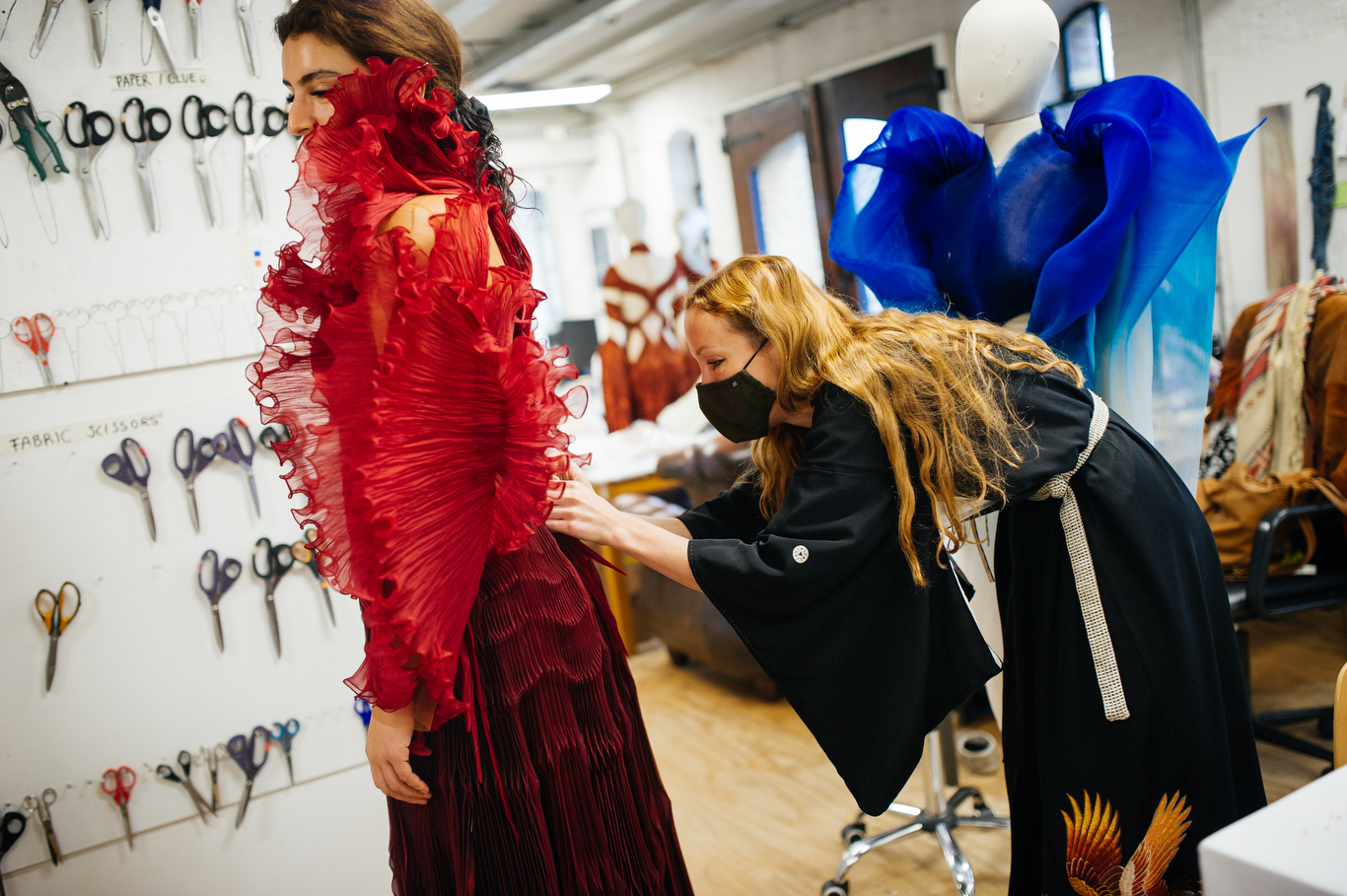 “I’m also guilty of wearing sweatpants now and then,” she confessed. “I also have a big passion for traditional Japanese kimonos and I wear them quite a bit. When I wear something special, it definitely influences my whole being, and my vibe for the moment.”

And she has no doubts that women will embrace special-occasion fashions with gusto, as soon as health conditions allow gatherings. “People are so eager to see special moments again. I actually think we will value them more,” she said.

While she’s eager to one day return to the Paris runway, Van Herpen is relishing the freedom the digital format allows.

“The garments themselves are interesting hybrids between nature and the world we are in now, that is much more mixed with technology, and the synthetic elements of reality,” she said.