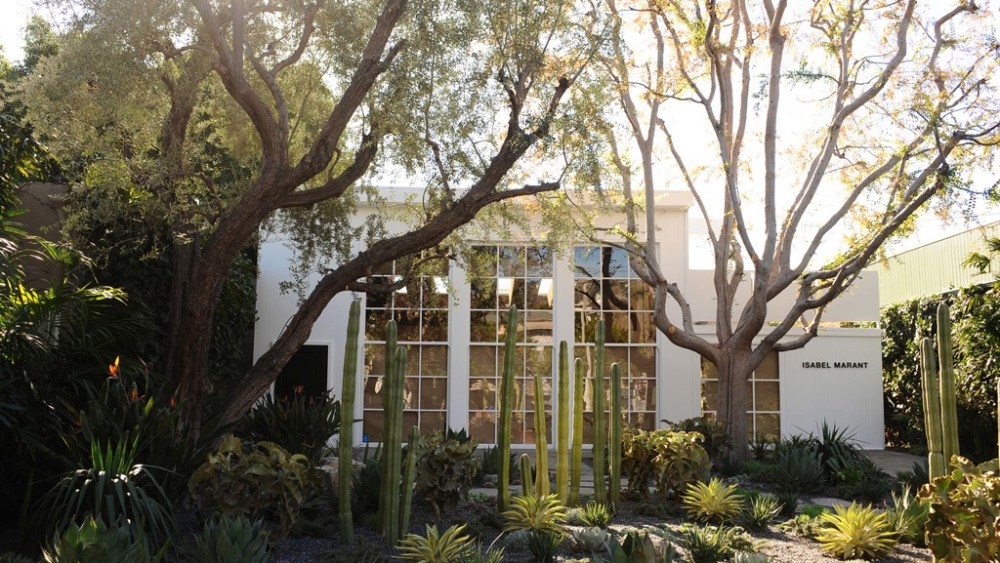 Opened today, the 1,100-square-foot store is the French designer’s second in the U.S. and 11th worldwide. The nearly three-year gap between the launch of Isabel Marant’s New York store on Broome Street in SoHo and the new Melrose Place outpost is illustrative of a slow and calculated retail progression that has helped the brand stay highly coveted.

The seeds for Marant’s West Coast retail expansion were actually planted when the designer traveled to the U.S. to celebrate the launch of the New York store in 2010. Afterward, Marant was unable to return to Europe — ash spewing from an Icelandic volcano had halted cross-continental airplane traffic. So she decided to take a trip to L.A.

“I fell totally in love with the city, with the landscape and the nature that is in the middle of the city,” she said. “It was very surprising for me because I was not imagining that it was such a green city. Then, I thought I really wanted to have a shop there.”

During her stopover in L.A., Marant visited Melrose Place. Compared to grander retail thoroughfares in the city, notably Rodeo Drive, she was drawn to the coziness of the street. “I like to have the feeling of a little privacy, and that was the feeling I had when I stepped onto Melrose Place,” said Marant. “I think it will be my favorite shop in the world. I would almost like to keep it as a house for myself.”

In fact, Marant’s stores have a lot in common with houses. The Southern California works of modernist architect Richard Neutra inspired the Melrose Place store, which Marant described as “my living room.” The exterior of the store is white and surrounded by a garden with Joshua trees and cacti. Illuminated by windows and skylights, the spare interior has a concrete floor, but is mainly constructed out of wood occasionally painted with pops of red and black for accents. The interior features a mobile and a sculpture by Arnold Goron as well.

“It is not going to look so much like a shop,” said Marant, who kept a close eye on the development of the store this past summer, when she spent three weeks in California. “Everything is in drawers. It is like you opened your cupboards. It has a huge cupboard with sofas and a very nice garden that we have totally redone in the L.A. style with the kinds of plants that usually grow in L.A.”

Isabel Marant has been steadily adding to its retail base. The brand opened stores in Seoul, Paris and Tokyo last year. The Melrose Place store will be followed by a London unit slated to open the middle of this year in Mayfair on Bruton Street.

Although Marant would consider opening stores in more American cities, naming Chicago as a possibility, she isn’t in a rush to do so. She noted it takes quite a while to locate the right real estate. “I am always trying to choose something a bit different, not on the main road, always a bit aside, but that takes time to get the real feeling of each city,” said Marant.

She is also exceedingly cautious when it comes to spreading retail so that her brand, which has some 700 points of wholesale distribution, doesn’t become overexposed. “I don’t want to be everywhere. I need to set up in places where I really feel my customers are,” she said. “I want to keep my company not becoming a huge company because then it is quite difficult to keep a certain freedom and a certain trueness. When you have too much pressure, that’s when you start to do things too commercially, and I think it is when labels lose their strength and their personality. So we are trying to keep a balance between small and big.”