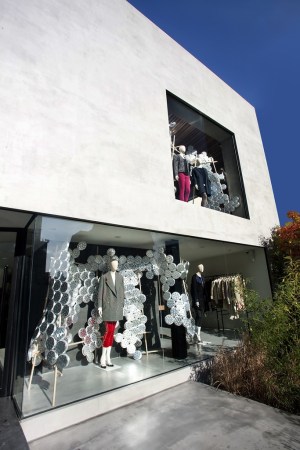 SEOUL — Isabel Marant has a new home in South Korea.

The French designer feted her first stand-alone flagship in Seoul last month. Located behind the Gucci flagship in Cheongdam-dong, one of the city’s most expensive areas, the more-than-2,000-square-foot store is housed in a two-story building that used to be a restaurant. It opened to the public in late November.

“It’s quite a big space and it was important that we could show both the main Isabel Marant line and [diffusion line] Etoile,” said chief executive officer Sophie Duruflé, who flew in for the launch.

French architectural team Ciguë kept the feel of the house, but added whimsical touches such as a ceiling of thin wooden beams of varying hues, fun fabric-covered blocks and a flowing installation of metallic plates to surround the mannequins in the window.

“The design was very influenced by the city of Seoul,” said Christophe Mollet, commercial director for Asia. “The people here are very glamorous and very fashion-conscious, and they use style to project power and authority.”

Arleen Kim, senior manager at LG Fashion Corp., Marant’s merchandising partner in Korea, said the brand has averaged 35 percent annual sales growth since 2009. Currently there are 15 stores in the country, and there are plans for five more by next year. “The high-top sneakers are always sold out, and the biker jackets are also particularly popular,” said Kim.

Executives declined to give sales figures but said they expect the brand’s sales in South Korea to continue growing this year.

“The celebrities here absolutely love Isabel Marant, which is why they were here today when they rarely go to events like this,” said Korea’s biggest celebrity stylist Yunki Jung. Girls’ Generation’s Sooyoung and “Cloud Atlas” actress Bae Doona were among the celebrities in attendance at the recent event.

“They can’t get enough of the layered French casual look,” Jung said.