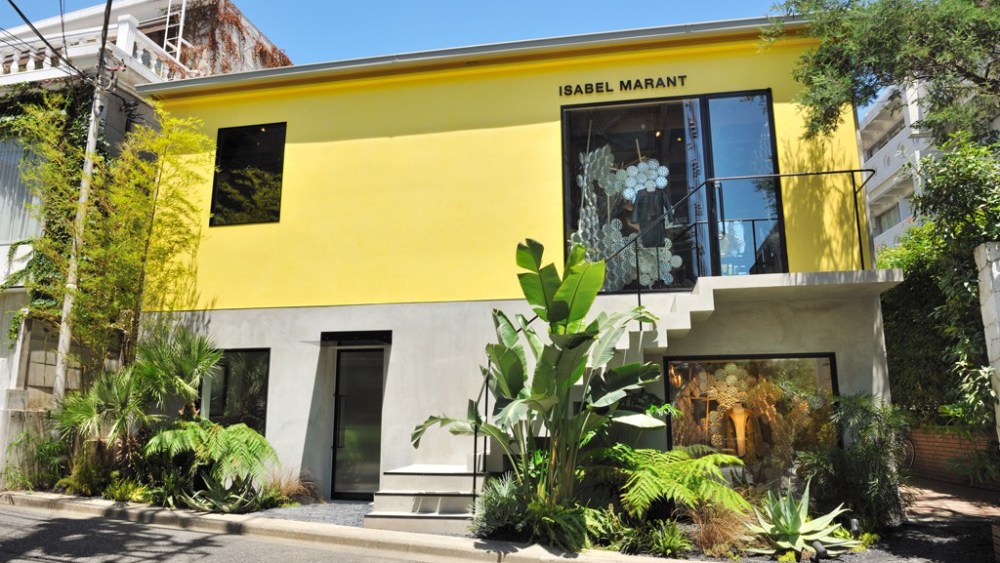 TOKYO — Isabel Marant is about to open her first stand-alone store in Japan in a Seventies-era wooden house painted a cheerful hue of lemon yellow.

The French designer’s boutique occupies the ground level of the building, located on a quiet side street just off Omotesando Avenue, just around the corner from Michael Kors.

Marant’s architectural team made the most of the existing wooden beam structure to create a rustic yet homey atmosphere featuring concrete floors, large resin lanterns and a dressing room with black tatami mat flooring. The upper and lower levels of the 3,500-square-foot building are home to a showroom, offices and meeting space for the brand’s Japan staff.

Marant said the house, which formerly housed a Scandinavian cultural association, spoke to her desire to find a special location in the city to anchor her small but fast-growing business in the country.

“I don’t want to have my window in the middle of all the windows. I kind of like a little privacy,” she said of the store’s positioning off the main strip. “We wanted to keep this wooden spirit, which is also very Japanese for me.”

The store, which opens Saturday, carries both the designer’s main collection and her diffusion line Etoile. Marant opened the store through a franchise agreement with Japanese retailer Tomorrowland.

Marant, known for her bohemian chic designs with an edge, said Japan has been a significant market for her since she began her line in 1994. The Parisian designer has a particular fondness for the Japanese people and their style.

“I always appreciate how the Japanese are curious about fashion and not only buying big labels. They always search for new, special things,” she said in an interview, as a member of her crew banged a series of aluminum pie plates into a sculpture at the store’s entrance.

Christophe Mollet, Asia-Pacific sales director for the brand, said that Isabel Marant has about 30 clients in Japan and is present in about 50 doors in the country. Although he declined to release sales figures, he said the label saw 120 percent sales growth last year. He expressed surprise at how well the company has performed since the devastating earthquake in March of last year.

“It’s been a paradox, you know, because a year ago we thought it was like the end of the world, and since then, it’s been very good. I don’t know. I think the Japanese have the idea that they can always rebound,” he said, attributing the growth to a combination of factors including the strength of the yen, which has made European goods more affordable, and consumers’ desire to enjoy life and treat themselves in the wake of last year’s disaster.

As reported in March, Isabel Marant posted wholesale revenues of 62 million euros, or $82.9 million at current exchange, in 2011, up 44 percent versus the previous year.

The Tokyo store is just the latest product of Isabel Marant’s ongoing international push. The designer recently opened an outpost in Hong Kong. Future openings are planned for London, Seoul and Los Angeles, as well as a fourth store in Paris. The brand will have 14 stand-alone units by the end of the year.