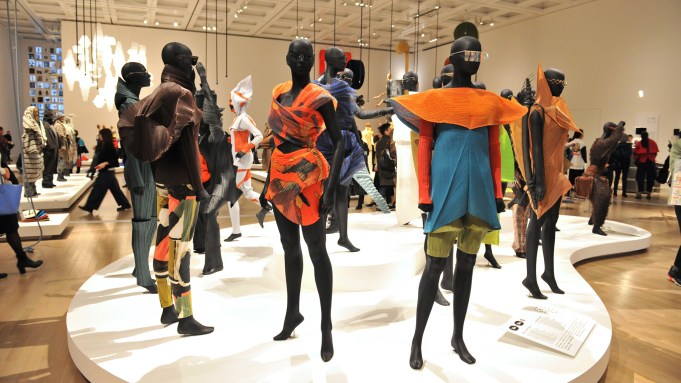 TOKYO — A retrospective exhibition on the work of Issey Miyake will open Wednesday at the National Art Center here, examining more than four decades of the designer’s inspiration and innovations.

Broken into three sections, the exhibit includes both archival pieces from past collections and interactive and moving displays demonstrating how some of the clothes are made. It runs through June 13.

While the show celebrates Miyake and his work, the designer was humble and quick to point out at a press conference that now, many of his famous technological innovations are the result of collaborating with others.

“Now we are working as a team, so my team might tell me that there’s a certain machine or something. I’m not very strong when it comes to using technology, but they come to me with ideas of things that exist that we might be able to use and [my designs and inspirations] are connected to that,” he said.

The first exhibition room in the gallery has a row of mannequins which, in true Miyake style, are made from 365 panels of laser-cut paper, assembled together to mimic the human form. The bodies wear some of Miyake’s most notable early pieces, including a romper with a tattoo print of Janis Joplin and Jimi Hendrix from the very first Issey Miyake collection in 1970, and a 1977 seamless wool cocoon coat made from one continuous piece of cloth.

The second section of the exhibit is dedicated to Miyake’s exploration of the relationship between clothing and the body that brings it to life. Here the same mannequins are made from clear resin, and the works presented were pulled from the designer’s fall 1980, spring 1982, fall 1983 and fall 1984 collections, each of which used different techniques to sculpt unexpected materials into wearable forms.

The climax of the exhibit comes in the massive third exhibition room, where Miyake’s many recurring themes and innovations in clothing construction are celebrated. While dozens of mannequins are dressed in ground-breaking looks from decades of collections, at times it is the other ways in which the clothes are presented that steal the show. A full-sized, functional machine manned by two staffers shows how Miyake’s famous pleats are created, while other displays show flat, folded garments that appear to magically take shape when placed on the body. There is also a video presentation and interactive exhibits for children.

At the press conference for the opening of the exhibit, Miyake was asked what he thinks will be some of the challenges for designers over the coming 40 years.

“I don’t think I’ll still be around in 40 years so it’s a bit of a difficult question, but I think if you think about the problems facing humanity, such as aid issues, problems concerning natural resources, the growing population and other various issues…I think we need to think like our ancestors and consider making things that take a bit more time or that can be used by both men and women or even by the whole family,” he said. “I think people will have to think about these things before making new things.”