It’s In the Air

The latest crop of new designers knows how to use a light touch, showing airy confections that incorporate everything from sculptural ruched silk to ostrich... 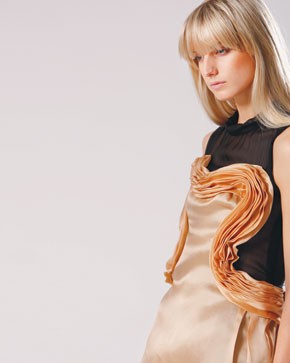 The latest crop of new designers knows how to use a light touch, showing airy confections that incorporate everything from sculptural ruched silk to ostrich feathers.

KHOON HOOI
Backstory: Khoon Hooi has been a well-kept fashion secret in the West. The Kuala Lumpur-based designer has cultivated a loyal following of Malaysian fashion mavens since he launched his signature collection in 2000. Eight years later, he’s expanding into Stateside markets for spring. Hooi, 34, graduated from the Malaysian Institute for the Arts in 1993 and worked as an assistant designer for Voir, Playboy and Japanese retail giant Isetan. It wasn’t until he was named a finalist in two 1996 young designer competitions that Hooi considered launching his own line, which expanded to a secondary collection called Inspire.

Stats: Wholesale prices range from $115 for a shirt to $247 for more elaborate dresses. The collection will be carried at Big Drop and Noir et Blanc in New York, Lisa Kline in Los Angeles, Jaime in Malibu, Calif., and Nicchia in Glencoe, Ill.
— Jessica Iredale

KEITH LISSNER
Backstory: Keith Lissner, 30, is a fan of all things old-fashioned, from corsetry to the Pre-Raphaelite painter Herbert Draper to classic opera. Not to mention the grand tradition of made-to-measure dressing. Growing up, he watched his grandmother sell Dior and Bill Blass gowns out of her Chicago dress shop. “At the time, the business was so focused on the client,” Lissner recalls. “She would actually go to meet with some of the designers to tell them what her clients wanted from them, and they would design accordingly.” Inspired by her example, Lissner attended the London College of Fashion and interned for Moschino Cheap & Chic. He then worked in the production department for Ralph Lauren children’s wear, and later in the men’s design departments of both Lauren and Perry Ellis. Lissner launched his collection for fall 2007, and Grandma is still his number-one consultant: “She’s not shy to tell me when she doesn’t like something.”

Collection: “There’s definitely a romance to my clothing,” notes Lissner, whose spring collection is inspired by Nokomis, the Algonquin equivalent of Mother Nature. He applies the craftsmanship he learned making men’s wear into dramatic pieces such as a tiered black gown in taffeta silk moiré or a tulle dress with silk embroidery — which Lissner claims involved 3,000 hours’ worth of work.

Stats: The collection is sold at Pixie and Ivy in Houston; Frances Heffernan in Winnetka, Ill., and Penelope in Bruggia, Italy. Wholesale prices range from $150 for a top to $7,000 for a hand-beaded dress.
— Véronique Hyland

LOVENIA
Backstory: Love brought Heidi Handler, 34, to Vienna 10 years ago, but it was fashion that kept her in Mozart’s city, where she studied couture design under Jean-Charles de Castelbajac at the University of Applied Arts. Intent on creating a designer line that incorporates the fine detailing and craftsmanship of couture, Handler, now based in Pennsylvania, launched her first collection this year for spring — just eight light-as-air dresses — under the first name of her great-grandmother.

Collection: “I’m very inspired by the Twenties,” Handler says. “I’m drawn to the fluidity of the dresses women wore then and the lines that follow the natural curve of the woman’s body.” To wit, her delicate cocktail dresses evoke the jazzy detailing of the era’s evening clothes. A cotton and silk muslin dress is trimmed with tea-dyed ostrich feathers, while violet silk mousseline peeks out from a metallic gown. “I’d like to add little jackets and stoles next year,” says Handler.

Stats: The Lovenia spring collection will be sold at Gail Rothwell in East Hampton, N.Y., wholesaling from $454 to $1,074. “I’m sticking with this theme: glamorous and laid-back, at the same time.”
— Sarah Haight

PODOLL
Backstory: In 2003, when Josh Podoll set off to meet with the buyer for San Francisco boutique AB Fits to hawk his new eponymous T-shirt line, he had no idea he would encounter his future bride and business partner. “I completely lost my train of thought,” recalls Podoll, 35. “There was definitely instant chemistry.” It goes unsaid that his now-wife, Lauren Berdell Podoll, 30, picked up the line for the store, one of the first to do so. Yet Podoll never set out to work in fashion. He was trained as a fine arts painter and initially only did a few graphic Ts for fun before someone suggested he go retail. Good thing — the pair began dating shortly after that meeting and got hitched in 2005. The Josh Podoll shirt label is still going strong, but this year, the San Francisco-based couple added a new bundle to their family: a ready-to-wear line called Podoll.

Collection: The duo has a clean and architectural approach to fashion, with just a touch of conceptualism. Take, for instance, a Sixties-like shift with nine collars at the neckline, each layered on top of the other and successively smaller in size. “We were interested in geometry, but also the idea of time and how shapes can change,” explains Berdell Podoll, adding that the frock was also a nod to the varying hemlines through the decades. Inspired by minimalist artist Agnes Martin, the couple also prefers to let construction and surface texture — as in hand-smocking — serve as embellishment rather than prints or appliqué frippery.

Stats: Wholesale prices range from $150 to $800. So far, Barneys New York, Fred Segal and Louis Boston are among the stores that have picked up the line.
— Venessa Lau

LORICK
Backstory: Abigail Lorick is launching her collection for spring, but fans of the CW’s teenage hit “Gossip Girl” already have had a preview. The youthfully elegant contemporary line masquerades as the show’s Eleanor Waldorf collection. (Remember those colorful backless dresses Serena and Blair frolicked in for their photo shoot?) Such broad exposure is a big break for the emerging designer, who was introduced to the show’s producers through a friend in its wardrobe department. Lorick, a Florida native, got hooked on fashion as a teenage model working in Milan and Paris. After retiring from the runway, she enrolled at FIT and designed for the preppy sportswear line TS Dixin before starting Lorick, which she designs out of her TriBeCa studio.

Collection: Lorick wants to put the polish back in young women’s wardrobes. “Living in New York, I think we feel like everyone gets up in the morning and puts heels on,” says the 25-year-old designer. “But the reality is, women my age don’t do that.” Poplin pencil skirts and capes, linen blazers, silk jumpsuits and accessories such as printed driving gloves and skinny belts are ladylike and playful, both key elements in Lorick’s fashion mentality. “You can throw a scarf on with a T-shirt or wear gloves in the summertime,” she says.

Stats: Wholesale prices range from $27 for a silk scarf to $260 for a canvas trench. The collection was picked up by Steven Alan, Caravan and Darling in New York; Eskell in Chicago; Activeendeavors.com, Gargyle.com and revolveclothing.com.
— J.I.