For fall, designers took a cue from the season itself, with rich autumnal colors like apple red, as seen here from Tommy Hilfiger. 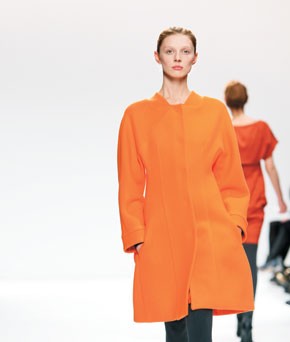 For fall, designers took a cue from the season itself, with rich autumnal colors like apple red, as seen here from Tommy Hilfiger.

A Slice of Orange

Nothing says fall like the turning of the leaves, and this season, certain designers worked a palette reminiscent of those changing shades — pumpkins, mustards, brick reds and mosses. Even Narciso Rodriguez’s lineup of mostly black-and-white fare got an occasional jolt of orange. Here, one such fiery number: a chicly structured double-faced wool coat.

Designers took a cue for fall from the season itself, mining autumnal colors like rich yellows, olives and rusts for everything from a sportif coat-and-print-blouse look to fluid gowns.