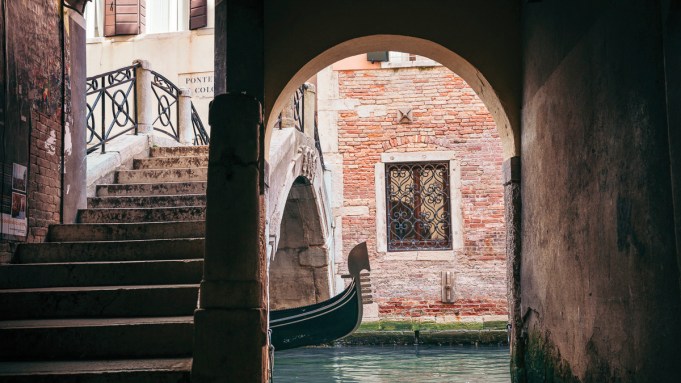 Talk to your consumer.

Italian fashion designers and executives are embracing this mantra, feeling empowered by their companies’ rich history and tradition, which reflects that of their country.

René Caovilla unveiled a video dedicated to the brand’s hometown, Venice, to coincide with the city’s Film Festival this month. “We are proud and aware that Venice has given us an unconscious knowledge for three generations, chiseling our taste for more than 80 years,” said creative director and chief operating officer Edoardo Caovilla. “Venice has influenced [the brand’s] proportions, chromatic harmony, architecture, and we believed it was only right to pay homage to this cradle of beauty.”

The video, the work of Roman director Oliver Astrologo and his brother Nils, focuses on the artisans in the city’s “calli,” the narrow streets between the canals, from a gondola maker to a textile workshop where brocade is woven on 18th century looms. Caovilla will donate the short film to the city and to its mayor. This is the first of a series. “It’s important to tell the origins for the future,” said Caovilla. “With a strong past, the future is more credible.”

At a time that many define as challenging, Caovilla said “the most interesting thing is to observe and understand new consumers, who appreciate the product, but pay the same attention to the brand’s values. We tell them where we come from and how we do things.” The luxury footwear company, which is also eyeing an initial public offering down the road, will unveil its first direct online store at the end of the month, covering 100 countries.

“We are working on a very important digital revolution in the upcoming year-and-a-half,” said Stefano Rosso, chief executive officer of OTB, which controls the Diesel, Maison Margiela, Marni and Viktor & Rolf brands, as well as manufacturing arms Staff International and Brave Kid. “There will be an acceleration as we believe this is the real business tool.”

All of the group’s brands are already online, but Rosso is aiming at “a better integration between customer and brand,” while the company is learning to “better manage the data that we have” as it develops its customer relationship management and platforms. “We are working behind the scenes to have a solid machine and bring all brands up to speed with digital firmly at the center,” explained Rosso. While a newly redesigned Diesel store will reopen in Milan by the end of the year, Rosso said that fashion companies have been “moving from the physical spaces to the virtual ones — also because of the economy.”

According to the Worldwide Luxury Market Monitor 2016 spring update by Bain & Co. and Fondazione Altagamma released in May, the online channel will remain the “champion” format with double-digit growth, and market segmentation will be more blurred, also through the online channel. Claudia D’Arpizio, partner at Bain & Co., said at the time that the market in the future will be defined by the strategic decisions set by the companies. “Customer strategy, branding, omnichannel and pricing remain priorities for ceo’s, and the key is to implement the value proposition locally. They should enhance personalized customer experience in-store, master brand content and storytelling, and refocus distribution strategy and footprint in a real omnichannel way,” she explained.

Luxury cashmere brand Fabiana Filippi launched its online store this month, reaching the 32 countries it works with. Chief executive officer Mario Filippi Coccetta emphasized how “consumers demand that a brand be present in more and different channels.” The site also allows us to open up to consumers and relate the brand’s history. “This is increasingly more important, to continue to talk about Made in Italy, our workmanship, to explain what is behind the product, why it’s more expensive.”

To further reach consumers, Filippi Coccetta aims to open the doors of the luxury cashmere firm’s manufacturing plants in Italy’s central Umbria region. “We must bring information closer to customers at the same time, as we instruct our store managers to explain our product to consumers,” he said.

Cue the exhibition organized by Italy’s Camera della Moda and supported by the Ministry of Economic Development and the Italian Trade Commission to be unveiled Sept. 21, kicking off Milan Fashion Week. Called “Crafting the Future. Stories of Artisanality and Innovation,” curated by Franca Sozzani and held at Mudec, Milan’s culture museum, the event is expected to draw Prime Minister Matteo Renzi once again, and the newly minted mayor of Milan, Giuseppe Sala. The exhibit will be open to the public until Oct. 13. Sala, previously chief executive officer of the city’s international expo, has emphasized the need to further open the shows to the city, “becoming more inclusive,” making Milan even more international. (For more on the exhibition, see page 60.)

Bottega Veneta, which marks the 15th anniversary of its creative director Tomas Maier and the 50th anniversary of the brand itself, will live-stream its show on Sept. 24. It will combine both its men’s and women’s spring collections and, for the first time, it will be held at the historic Accademia di Belle Arti di Brera in Milan, also known as the Brera Academy. The show will be staged in the classroom hallways of the venue, lined with classical sculptures and artworks. Artisans and employees will also attend the event.

Ceo Carlo Beretta underscored the “organic” connection between Bottega Veneta and Milan, where the company opened its first boutique in the early Eighties, followed by the first Maison in 2013 and the first Home Collection unit at Palazzo Gallarati-Scotti last year. “In this frame, the strong bond with the local community will be further reinforced by the partnership between Bottega Veneta and the Accademia di Belle Arti di Brera, one of the most prestigious places of learning in the city, encouraging the creativity of the next generations by providing scholarships for students during the 2016-2017 academic year,” said Beretta. “This commitment confirms the brand’s dedication to secure the education of future artists and craftspeople. For this purpose, in 2006 the house opened la Scuola dei Maestri Pellettieri di Bottega Veneta, a school to train leather-goods artisans.”

Fashion companies and entrepreneurs, from Tod’s Diego Della Valle to Fendi, have also been investing in preserving the country’s monuments and art works, and Bulgari will unveil the newly restored Spanish Steps in Rome on Sept. 21, after spending 1.5 million euros, or $1.7 million. Ceo Jean-Christophe Babin described the Spanish Steps as “one of the most precious architectural jewels in Rome, a monument that represents the heart of our history.” Rome’s “artistic and cultural patrimony has contributed in a defining way to the success of the maison,” said Babin, noting that Bulgari will forever be associated with the project. “We hope to collaborate with the city on future projects to continue to preserve and emphasize the beauty that this unique city offers to the world.”

Against a backdrop of a slowdown in tourists in Europe, Milan Fashion Week comes at a time of changes at several Italian luxury companies. Gian Giacomo Ferraris is now leading the Roberto Cavalli group after orchestrating Versace’s turnaround. Former Alexander McQueen ceo Jonathan Akeroyd succeeded Ferraris, while former Furla ceo Eraldo Poletto joined the Salvatore Ferragamo group on Aug. 2, succeeding Michele Norsa. The executives all declined to discuss future strategies for this story, feeling it was too early in their mandate. Design-wise, Ferragamo also tapped Paul Andrew as its first director of women’s shoes earlier this month, following the exit of creative director Massimiliano Giornetti last spring. The brand’s ready-to-wear collections and accessories will be designed by an in-house team.

Italy’s fashion industry has slowed its growth, but is still expanding, despite the weakness of international markets. According to the Fashion Economic Trends provided by the Italian Chamber of Fashion this month, revenues this year are expected to total 86.4 billion euros, or $96.6 billion, up 1.4 percent compared with 2015. Last year, sales rose 2.4 percent versus 2014. In 2016, exports are expected to climb 1.5 percent to 62 billion euros, or $69.3 billion. The second quarter of the year improved compared with the first, but the third quarter is expected to slow down, with business picking up in the last quarter, said the study. The months of July and August were affected by the Brexit vote in June, but those effects are forecast to wane in the coming months.

Massimo Ferretti, executive chairman of Aeffe, ruled out “any significant impact” following Brexit. Despite the slowdown in tourism — especially in Europe, following the terrorist attacks, which weighed on retail — the company’s revenues grew 7 percent in the first half. Outside Italy, Aeffe, which controls the Moschino, Alberta Ferretti, Philosophy di Lorenzo Serafini and Pollini brands and produces and distributes collections for Cédric Charlier and Jeremy Scott, is expanding mainly in the Far East and Middle East. Four new duty-free stores are opening in Seoul, in addition to 10 new franchise stores in China, Indonesia, Saudi Arabia, Thailand and Myanmar, said Ferretti. The Alberta Ferretti boutiques were just renewed in Moscow at Gum, Petrovsky Passage and Vesna.

While continuing to build its online business, Dsquared2 has also been actively developing its retail network. As part of the brand’s plans to open 40 stores in five years, revealed in 2014, ceo Gianfranco Maccarrone said that the company had opened nine units this year and expected to open three more by the end of 2016. “The goal is to open 10 stores each year, because our retail project is still young,” said Maccarrone. In 2016, Dsquared2 opened banners in Rome, Paris, Madrid, Istanbul, Beijing, Vietnam, Macau and Vienna. “We are not immune to what’s been happening in the world, but our retail business has performed well, so this is a message of growth.”

The company, which is developing its product into a more sophisticated range, will open 10 stores in China between 2017 and 2020.