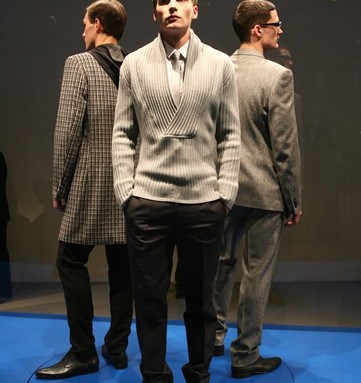 A former Eighties maximalist carries on the house tradition in men’s Collection.

The wide world of Calvin Klein products for men is today in the hands of Italo Zucchelli.

The designer was neither American nor originally a minimalist, but the Calvin Klein Collection creative director for men worked directly with Klein for years, and for the past 11 seasons, has steered the designer collection he inherited on a course set for ambitious global expansion.

The tough task of stepping into Klein’s shoes would weigh on even the most professional designer. But Zucchelli, 43, bears it with humility, gratitude and his trademark serenity. In addition to consistently finishing his work early, leaving nothing to go wrong at the 11th hour and even leaving time for a few minutes of solitude, Zucchelli has cultivated inner calm through years of meditation and yoga. Furthermore, he’s living the dream of a fashion-crazed teenager from small-town Italy.

The designer was positively beaming after his spring 2009 show in Milan, which at one point received spontaneous applause and, in turn, prompted hugging and crying among the assistants backstage. The monochrome, neon yellow ensemble that kicked off the show was as unabashedly spirited as a uniform in the Olympic Games. Indeed, the inspiration for the collection came from athleticwear. Some pieces were perforated like vintage basketball jerseys. Knee breeches and fitted sweaters evoked early football uniforms. And the meshes, sponges and plastics of modern sneakers gave Zucchelli an idea for a white warm-up jacket made of five different materials.

Putting known materials to novel purpose is his strongest signature as a designer, and he also develops unfamiliar textiles for use in apparel. In the spring collection, for example, sweatshirt jersey became tailored clothing and bleached denim became a fitted bomber and seamed trousers. Zucchelli also has fun reinventing the brand’s iconic elements, such as elastic underwear waistbands, which he used on trousers last year.

Another of his signatures is his commitment to lean, muscular physiques, no matter how skeletal the models may seem elsewhere. It’s telling, perhaps, that his first memory of the Calvin Klein brand is of Olympic pole vaulter Tom Hintnaus in an Eighties underwear ad. The image continues to represent a male ideal to him.

However, back then, the teenage Zucchelli was deep into the maximalism of the era. “It was the Eighties,” he said with a shrug. “We were very creative, sometimes making our outfits, buying vintage. Occasionally I would buy a designer piece like Jean Paul Gaultier or Comme des Garçons. Then we mixed it up — very eclectic. We would really dress up big-time to go out.” Gaultier, he said, was his hands-down favorite.

His family in Lerici, a coastal village two hours north of Milan, supported his passion. They first saw him off to the Architecture University in Florence, then he transferred to Polimoda, the fashion university, as soon as it opened. “When I got the letter that I was accepted, my father cried,” he said. “He understood how much I wanted that and the energy I put into it. I always wanted to work in fashion.”

After stints at Romeo Gigli and Jil Sander, he was approached by Calvin Klein and agreed to move to New York. The Gaultier-loving teenager from Lerici had undergone a full-blown conversion to minimalism.

“My jobs were always in this aesthetic. Early Romeo Gigli was superminimalist. I started to really appreciate that. Somehow it’s what fashion evolved into.” Furthermore, he said, he experienced a spiritual change. “It had nothing to do with religion. It was just an opening to think. I realized there is more to life than the material. I started meditating and doing yoga. That completely evolved even the way I see fashion. I went from a maximalist, Baroque fashionista attitude…to this. This aesthetic is very natural and easy for me,” he said.

Zucchelli’s first duties at the brand were actually in women’s. “Calvin wanted somebody with mainly men’s experience to design women’s,” but it was an awkward fit. Zucchelli collaborated on two women’s collections before requesting a switch to men’s, where he worked with Klein on four more collections. Then the founder retired and Zucchelli was given responsibility for the men’s Collection.

Last year, the Council of Fashion Designers of America nominated him for Menswear Designer of the Year, but the prize went to Ralph Lauren. Had Zucchelli won, he would have been the first successor at a heritage brand to do so.

Hoopla aside, Zucchelli simply wants to keep making sophisticated clothes that relate to the human body. And now that he’s designing pre-collections — the transitional offerings between runway seasons — his creative output is higher than ever.

And his inspiration comes from a variety of sources, with music being a major one. “If I wasn’t a designer, I would work in music,” he said. “I would either play the piano or be a singer. There is a part of me that always fantasized that. Or I would work at a record company or magazine.” Not that the fashions of particular artists or genres interest him greatly. He thinks of music more like air, he said. “What you breathe goes into what you do. It’s always in me, all day long.”

Other inspiration comes from daily life, where architecture is omnipresent. (His partner is an interior designer.) Zucchelli visits Chelsea art galleries frequently when he’s home in New York, and when he escapes to his beach house on Fire Island, N.Y., he runs beside the ocean. Wherever he is, he meditates daily. Anything that sweeps away the mental debris generated by a glamorous, international career seems to pump his creative juices — and keep his duties to the $4.5 billion Calvin Klein brand in perspective.

“I’m just very happy when I see the clothes on people,” he said. “That feels good.”