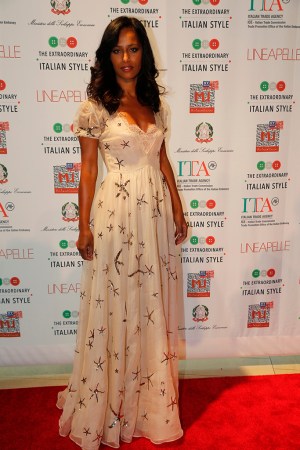 NEW YORK — To underscore how integral Italian culture is to the country’s fashion, an array of Italian leaders and trade officials hosted a real red, white and green event Monday at Alice Tully Hall here.

Beforehand, Candela jokingly told the crowd that his slightly fraying bespoke suit would indeed be replaced once he returns to the private sector.

He was more serious about Italy’s new $21.6 million fashion initiative for the U.S. pointing to the Midwest, Texas, the East Coast and the West Coast as potential markets. “We can do more deep in America. It’s a natural thing and a positive one to consider what Italy can realize. This was also true during difficult periods. We have had in the recent past very difficult periods where our image was jeopardized by politicians and now we are back,” Candela said. “We were able to recover from our crisis identity and now we are back here amongst a lot of friends and buyers who have supported us through difficult times. We want to recognize this and thank you all very much.”

Italian brands are among the European labels sparking sales at Century 21. Goldi spoke of wanting to expand the retailer’s 61,000-square-foot Upper West Side store. “If something comes up in the neighborhood, we would jump all over it,” he said. “We get a lot of tourists and they love luxury brands. European accessories are a little stronger than apparel. Handbags and shoes are amazing.”

Vernon said, “It’s supersmart of the Italians to get on this. There are a lot of younger people who are really talented, who could absolutely use the support of the Italian Trade Commission to help them get into these factories. Whenever government is aligned with the nurturers and the money, that’s a win. Listen, money doesn’t have to just come from the Vogue Fashion Fund.”

Chef Lidia Bastianich spoke of having a different kind of break – her summer one. Fresh off the plane from her family’s vineyard in Fruili, Italy, she said of the evening’s tasting menu, which included local lobster and buffalo mozzarella salad, a Sardinian classic, “For a group like this, it’s a question of choosing the right recipe. Like choosing a dress, you need the right material.”

Many in the crowd knew Bastianich as a “Junior Master Chef” judge in Italy more so than a PBS cooking show host. Those who want to try her recipes can do so in October when the 400-page “Lidia’s Mastering the Art of Italian Cooking” is released. As for the secret to her expertise, she said, “First of all, it’s the products, traditional Italian products, but also the seasonal products. Once you have these beautiful products, you don’t have to worry. It’s like a mode of style — you have a great material with a simple line and it’s beautiful.”

Brown spoke of another kind of break — as in her left hand. Facing a six-week recovery, she said optimistically, “I’m right-handed. That’s the only good part of the story.”

Mendel seemed to capture the event’s global scope. He said, “I’m French with a U.S. passport and a company now that is settled in America, and I have a little foothold in Italy because I manufacture leather goods, handbags, furs at certain times in the area of Milan and Florence. So I’m sort of a worldly interpretation of fashion.”