The 18-year-old long jumper was chosen by Red Valentino to appear in resort 2021 editorialized content.

There is no woman in Italy that jumps farther than Larissa Iapichino.

When the athlete next summer represents Italy at the Summer Olympic Games in Tokyo, she will definitely feel the responsibility of making the long jump popular again. Her mother, Fiona May, helped raise the profile of the event in Italy in the 1990s, when she won a range of worldwide championships but also two Olympic medals, in 1996 in Atlanta and in 2000 in Sydney. While Fiona May was raised in the U.K. and moved to Italy — “where she received citizenship when she married fellow athlete Gianni Iapichino — her daughter was born in Florence and spent her entire life in Italy.

May has not only been a fantastic athlete but in the 1990s she also embodied a message of inclusion in a country that is still coming to terms with considering diversity par for the course. Those Italians born after 2005 will certainly remember May and her daughter appearing in a popular ad promoting a healthy snack produced by food company Kinder. That was probably one of the first times on national TV that the nation’s public saw a scene of domestic life interpreted by two Italian Black women.

“I had so much fun doing the commercial. My friends still tell me they were so jealous of me at that time,” said Iapichino, who was 8 when the TV ad appeared in 2010. “Definitely that experience helped me to feel more comfortable in public.”

Iapichino, who is in her senior year in high school, is not only aiming for success in sports with sacrifice, dedication and passion — a field where she actually excels — but she also dreams about a career as a public prosecutor.

“It took me two years to decide what to study in college, but I’m very happy with my final decision, which is law,” said Iapichino, who found inspiration in her parents to succeed in sports, while she always looked to her uncle Alex, a lawyer, as a career mentor. “Since I was a child I’ve always felt a high sense of justice.”

According to Iapichino, a “high dose of organization” is required to balance sport and school commitments, while at the same time trying to enjoy the life of a teenager. “I’m probably a bit of a masochist, since I demand so much of myself,” she said. “But I like to be a multitasker and above everything I put a lot of passion in everything I do.” 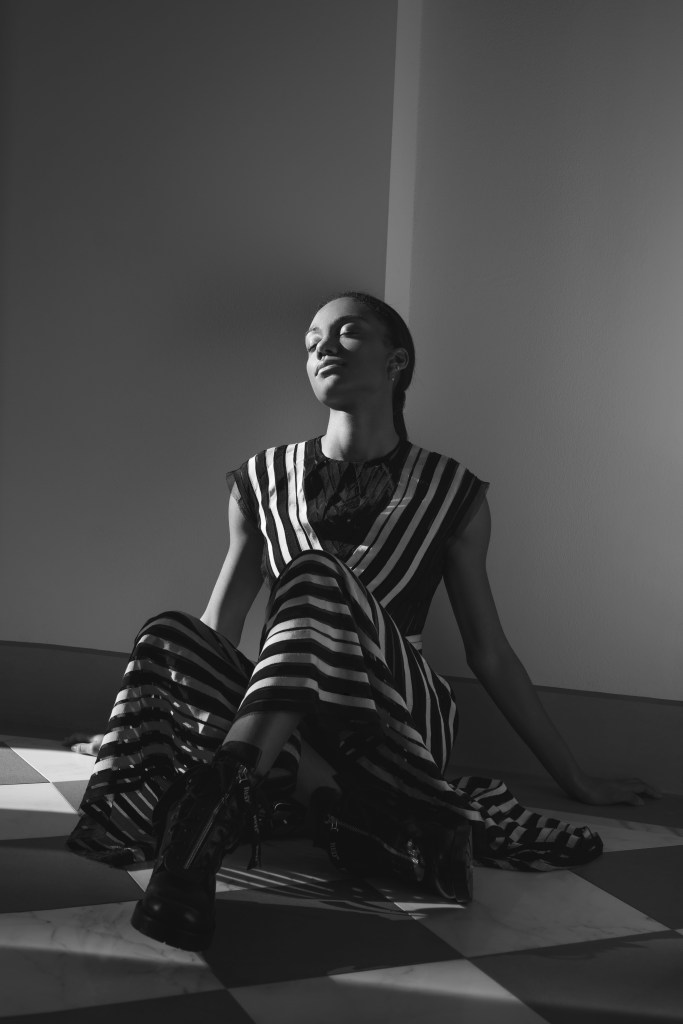 Before falling in love with the long jump, Iapichino tried different sports, including swimming, ballet, soccer and artistic gymnastics. But she is also passionate about fashion. When she was contacted by Red Valentino to collaborate on a special project, she didn’t think twice and jumped at the opportunity.

“I love fashion, I can spend hours watching videos of runway shows,” said Iapichino, her eyes twinkling. She was chosen by Valentino creative director Pierpaolo Piccioli and his team to feature in some editorial content, in which Iapichino poses both at her training center and at home sporting pieces from the Red Valentino resort 2021 collection.

“I believe the elements that can define Larissa would be contrasting and balancing: a strong identity, a powerful athlete, a rigorous mind on one end — a spontaneous, graceful and effortless femininity on the other,” Piccioli said. “She is authentic and immediate. She is blooming and unique. All ingredients of the ultimate and intriguing Red Valentino dreamer.”

While Iapichino already collaborates with brands due to her athletic endeavors, including Puma and Red Bull, the project with Red Valentino marks her official debut in the fashion world. “I was so excited,” said Iapichino, whose fresh and natural beauty stands out in the images she shot with Piccioli.