Ivanka Trump: Is She for Real?

With a focus on diversifying her fashion businesses, Ivanka Trump quickly shoots down the idea that she might have too much on her plate. 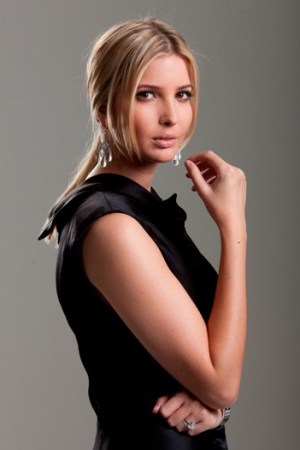 On a hot evening in July, Ivanka Trump — her wrists and fingers weighed down with Ivanka Trump Fine Jewelry pieces (including a major engagement ring) — is working an East Hampton crowd. The event is the launch of Trump’s signature fine jewelry collection at London Jewelers, the chain which will sell her pieces exclusively on Long Island.

Assorted friends (Bara Tisch, Flo Fulton) and quasi-personalities (Kimberly Guilfoyle) mingle next to glass cases containing Trump’s jewelry, which ranges from $450 entry-level items to one-off pieces like a black diamond lariat necklace that goes for about $38,000.

Stepping outside for a picture, Trump is spotted on the front porch of the store by a backpack-toting tourist, who shrieks, “Oh my God! Ivanka! Two words! ‘You’re fired!’”

The exchange, which invokes the catchphrase of “The Apprentice,” on which Trump serves as a judge, seems to capture her crossover from famous mogul’s daughter to nascent fashion designer and celebrity in her own right. Indeed, with the upcoming launch of her revamped Web site; the introduction of licensed shoe and handbag lines for spring 2011 at a press and retail presentation tonight, and the expansion of her jewelry collection to retailers including Saks Fifth Avenue and Neiman Marcus, Trump is angling to create a fashion juggernaut — all while maintaining her day job as executive vice president of real estate and acquisitions for the family business, the Trump Organization.

With a focus on diversifying her fashion businesses with both signature and licensed lines, Trump quickly shoots down the idea that she might have too much on her plate. “You know, my primary role is still real estate,” she points out, sitting in her 25th floor office in Trump Tower a few days after the London Jewelers opening. In a gray fitted Ports 1961 shift and a solitaire diamond necklace, Trump looks like a typical young Manhattan businesswoman, save for the framed Stuff magazine cover, on which she is minimally dressed, resting on the floor behind her, near a black-and-white photo of her husband, Jared Kushner, holding the newspaper he owns, the New York Observer.

Trump views her jewelry and accessories businesses as synergistic with real estate; she argues that cross-marketing will help sell Trump products across the board. Of the type of customer she is courting, Trump says, “I look at someone who can first buy my shoes and my jewelry, then hopefully buy our condominiums. You know, I like that. I like trying to create that loyalty to our brand.”

Trump’s jewelry collection is financed and operated separately from the real estate business. She hit upon the idea for fine baubles when a development venture in Florida with Moshe Lax failed to pan out in 2005. Lax is a principal in Dynamic Diamond Corp., a family-owned diamond vending company, which at the time had a retail space on Madison Avenue, though Lax was reportedly dissatisfied with the store’s sales. Trump, who has been fascinated with jewelry design since her childhood days of dressing up in mom Ivana’s diamonds, had thoughts on how to update a fine jewelry collection that would appeal to both her own and her mother’s friends. In 2006, she and Lax entered into a partnership under the name Madison Avenue Diamonds, publicly known as Ivanka Trump Fine Jewelry.

The company’s flagship on Madison Avenue, opened in 2007, represents many of Trump’s initial ideas. “It’s light, it’s airy, you don’t have 10 security guards pounce on you upon entering and treat you like a cat burglar,” Trump says. The theme of her collection is “rock tradition” — as in the verb, to rock — which translates to modernist tweaks of traditional designs, for example, coral accents on pavé diamond hoops, octagonal earrings with black spinel and diamonds and oversize rock crystals set in rose gold on bracelets and necklaces.

“Working with Ivanka is easy, because she knows exactly what she wants, and she’s very consistent,” says Andrea Hansen, the chief executive officer of Ivanka Trump Jewelry. “She also can connect with different demographics. She has an instinct for what both younger and older women want.”

Part of Trump’s strategy to entice loyalty from women of her own generation is a focus on a degree of accessibility. To that end, she has embraced the Internet as a way to market her pieces, especially the lower-priced ones, to Web-savvy customers. For instance, on her Web site, she offers a rock crystal and diamond charm bracelet in white gold for $900 (the core of the collection retails for between $5,000 and $8,000).

“It’s shocking to me how many jewelers don’t have e-commerce capabilities, despite the fact that they’re creating more accessible lines,” she says. “You go onto the Web sites of well-regarded, big brand names, luxury jewelers, and the Web is an afterthought. We’re still testing, and we’ll still see what price point is sort of the top tier of what somebody will buy online versus having to see it in person, but I think that’s changing. Years ago, people said nobody would buy designer clothes without touching it. That obviously has failed as a theory.”

Trump has made her Web site and her company’s Facebook page interactive — there is video content and product-schilling contests, and a recurring component through which “fans” can vote yea or nay on outfits Trump will wear on the upcoming season of “The Apprentice.” The Web site, scheduled to relaunch early this month, will also feature a retail locator for the 125 Diamonds International stores and about 40 independent retailers that currently carry Trump’s jewelry.

The approach is proving successful so far: projected sales for the wholesale jewelry business will be near $7.5 million for 2010 (the retail business on Madison Avenue is projected to have sales of $5 million in 2010, about the same amount it took in for 2009). The company anticipates wholesale sales growth to be about 30 percent by the end of 2011.

To date, Trump has not formed an umbrella corporation for single oversight of her various endeavors. Shoes are licensed to Marc Fisher and the bags, Mondani. Trump declined comment on projected sales for those startups, nor has she yet made plans for an e-commerce site. Yet all three accessories lines share the same logo design and all bear Trump’s name; the marketing for each will rely heavily on exploiting her image. “I have the unique opportunity to not be a faceless brand,” Trump explains. “We stand behind a name, so it gives me an ability to speak as myself, whether it’s to our prospective transient hotel guests…or women buying my shoes.”

Those shoes, set to retail between $75 and $150, range from flip-flops to office-ready heels to evening sandals. The idea is to marry style with practicality. “With jewelry, there’s a certain price range you can’t go below. I think shoes and handbags are different — particularly shoes are different,” says Trump. “The price point is purely positioning in a lot of ways; unless you’re doing an animal skin, there’s no reason why a shoe is priced at $450 versus $150. Satin is satin.” Some of Trump’s shoes, however, will be done in leather, and, she adds, produced primarily in Asia.

The bags, to retail from $78 to $150, evoke a working-woman-in-Palm Beach vibe: cool colors like dusty rose, taupe and slate worked onto roomy totes and smaller clutches and shoulder-chain bags.

Both the bags and shoes will hit stores for spring; no retailers are yet confirmed for either collection. Yet with both, Trump is targeting the aspirational customer — or the one who needs another decade for a down payment on a Trump condo.

Saks Fifth Avenue is set to carry Trump’s fall jewelry collection. Cody Kondo, Saks’ senior vice president of fashion and fine jewelry, watches, women’s shoes, handbags and soft accessories, says the combination of craftsmanship and Trump’s name will appeal to the store’s affluent customers. “As a designer, Ms. Trump understands the lifestyles of our customer — how she dresses, how she entertains and how she socializes,” Kondo wrote of Trump’s jewelry line in an e-mail. “We believe her collection will resonate with customers of all ages.”

So do buyers abroad. Hong Kong retailer and fashion mecca Lane Crawford, which sells industry darlings like Monique Péan and Solange Azagury-Partridge, will begin selling Trump’s jewelry collection in September. Trump plans to open her first Asian flagship in Hong Kong next year, followed by others in Shanghai, Beijing, Taipei and Macau. As she is an interior design aficionado and helps oversee the decorating of new Trump hotel projects, she says a home furnishings line is also a possibility.

Yet Trump invokes her day job as a potential limitation to a full-blown fashion empire (her father, for the record, is very supportive of her side projects, “as long as it doesn’t interfere with all this,” she says, sweeping her hand toward the hallway).

“I guess I view myself as entrepreneurial,” Trump acknowledges. “But now that I have a shoe line, it has to be: How do I grow and develop this shoe line into something that’s bigger tomorrow than it is today?” She pauses and smiles. “If I see an opportunity with the right partner, in the right niche, I’ll consider it. In real estate, we’re always looking at the next deal.”