The first designer to win the International Woolmark Prize for men's wear will be revealed in London on Friday. 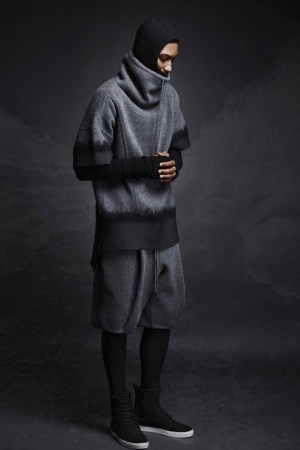 On Friday, the first designer to win the International Woolmark Prize for men’s wear will be revealed in London with the U.S.’ Public School vying for the honor alongside four brands from around the world: Sise from Japan, Asger Juel Larsen from Denmark, Australia’s Strateas.Carlucci and The Emperor 1688 from the UAE. The brands are competing for around $81,000 and the opportunity to sell at retailers including Matchesfashion.com, Harvey Nichols in Britain, Italy’s 10 Corso Como, Saks Fifth Avenue in the U.S., Joyce in Hong Kong, Isetan Mitsukoshi in Japan and David Jones in Australia.

The finalists will show their collections, which consist of six looks in merino wool, at a presentation during the first day of London Collections: Men. The winner will be announced at 2 p.m. London time after being judged by a panel including Paul Smith, Nick Wooster, Style.com editor at large Tim Blanks, Saks Fifth Avenue’s Eric Jennings and GQ U.K. editor Dylan Jones.

The women’s winner will be revealed in Beijing on March 17.

Here, the finalists offer WWD an exclusive sketch of one of their looks and a photo of the finished product.

The award had its start in 1953 as an initiative of the International Wool Secretariat and former winners include Karl Lagerfeld and Yves Saint Laurent.