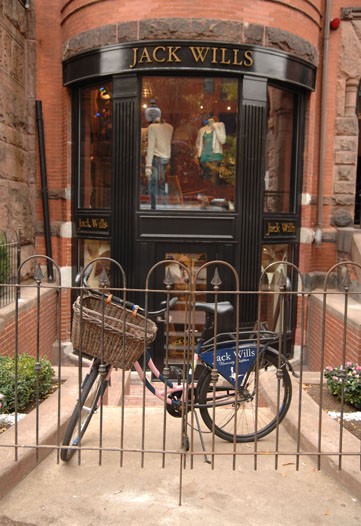 The British men’s and women’s wear retailer — which has zoomed to almost 40 stores in the U.K. and yearly sales of 90 million pounds, or $143 million at current exchange, on the back of its cult status among 18- to 21-year-olds eager to snap up its English preppy styles — is making its boldest move yet in that former colony called the United States with the opening of a 4,600-square-foot store in a former town house at 179 Newbury Street in Boston.

It’s the latest expansion move by a company that grew up in the Internet era and aggressively promotes e-commerce and social networking.

“This has always been a multichannel business,” cofounder Peter Williams told WWD in an exclusive interview. “The Web has always been at the heart of this business, which is built around the lifestyle of our core customer.” About 25 percent of sales are online, while 75 percent are from the retail stores.

And Jack Wills is totally focused on its customer — so much so that it doesn’t even court younger teens or older twentysomethings. Period. Williams winces if he hears that young teenagers are wearing the brand. And he doesn’t want his customers sticking around too long either; that’s one reason why he launched a second retail brand, Aubin & Wills. “Aubin is for the next life stage. Life beyond university, nominally post-university but pre-kids, and we’ve also found an older, cooler customer also buying into it which we’re excited about,” he said.

Given Jack Wills’ Web focus, it’s not surprising that Williams, unlike most brand owners, takes a decidedly democratic approach to brand building. His clients’ vision for the Jack Wills rules all. “Our brand is not owned by us, it is owned by our customers. So, whatever they are into, we are into,” he said, adding that if the customer wants the brand to go Goth, it will go Goth. The company will discreetly float new ideas for products on its Web site or through blogs — and see the sort of response it gets.

Williams and his friend Rob Shaw, who met playing rugby in their university days, launched Jack Wills in 1999, sleeping in bunk beds under the pitched roof of a shop in the seaside town of Salcombe, Devon, on the southwest coast of England. Both in their mid-20s, they spent their time hanging out and partying with the posh kids who flock to affluent Salcombe to sail, swim and sunbathe. In between beers, they’d sell them sporty and vintage-inspired clothing from their small shop on Fore Street, which the two friends had opened with 40,000 pounds, $65,000 at the time, of their savings — and credit card debt.

“The seagulls would wake us up every morning at dawn. We ate boiled onions. It sounds romantic now, but it was pretty awful at the time,” recalled Williams.

But their vision for a new, youthful lifestyle brand aimed at a small English tribe of well-off, privately educated, upper-middle-class, white kids 18 to 21 years old was unswerving. “It’s a time in life when you’ve thrown off the shackles of school and home, but you haven’t joined the real world yet. You’re not paying a mortgage, you don’t have a job. Creating a brand that epitomized that demographic was a compelling prospect,” said Williams, who is now 36 and married with children.

Today, with double-digit sales growth in the U.K. and Ireland, Williams is hoping that Jack Wills will make as big a splash in the U.S. as it has in its home market. Williams will today cut the ribbon on the Boston store, which follows two U.S. openings last year in Massachusetts, in Nantucket and on Martha’s Vineyard.

The company gutted the three-level Newbury Street space, keeping the exterior traditional but constructing a setlike interior of grand country house debauched by partying or, in U.S. terms, an Ivy League frat house post-kegger. In the formal dining room, mannequins sit on a disheveled table amid many emptied Champagne bottles. One scales a wall, her miniskirt caught up to flash the brand’s logoed undies, a frequent giveaway at events. Everything, from the herringbone parquet floors to sea-green embossed wallpaper in the top-floor boudoir, looks like a layer of grime has been rubbed in.

The merchandise split is 60 percent women’s, 40 percent men’s. Each sex’s assortment is essentially a mirrorimage of the other: polo shirts, plaid and striped button downs, denim, fleece and blazers. The pheasant mascot, Mr. Wills, is on the clothes, and in taxidermy form in a display case. Prices range from a $1.25 pin near the cash wrap to denim at roughly $90 to peacoats north of $300. Some limited edition party dresses, which should perform well given the number of local formals, will sell upward of $600.

Outside, they’ve parked a pair of pink-and-blue stripe Land Rovers they plan to use to deliver U.S. Web orders out of the Boston store.

Williams would not comment on future U.S. store openings, saying only, “We have no definite plans and are waiting to see how existing stores perform.”

But its U.S. strategy for growth will mirror the one it has followed in the U.K. At a time when so many designer and luxury labels are aiming to broaden their customer bases and preaching the virtues of masstige, Jack Wills is taking the opposite tack: The brand has never invested in traditional print advertising — and does not plan to. It markets itself virally, and doesn’t care a hoot if most consumers scratch their heads and say, “Jack who?” “You either know about it — or you don’t. You’re in the gang, or you’re not,” said Williams, a redhead who’s dressed today in jeans and a T-shirt. “We believe in building deep loyalty with a small number of people. We are not interested in the masses or in getting large numbers of customers quickly. If you are our target consumer, we want you to be obsessed with us,” he said, adding that much of the brand’s strategy over the years has been counterintuitive.

Jack Wills’ marketing focuses on events such as the sponsorship of annual collegiate polo matches, such as Eton vs. Harrow and Oxford vs. Cambridge at the Guards Polo Club in Windsor. The brand also runs JW Unsigned, a music label that allows hopefuls to upload their own tracks onto the brand’s Web site. Customers vote on their favorite music, and the winning bands have the chance to play on the sidelines of the polo events and at some of the stores. Williams said Jack Wills plans to use U.S. polo events as one of its marketing strategies.

In addition, Jack Wills hires attractive brand ambassadors — it calls them “seasonnaires” after the English kids who do seasonal jobs at ski resorts like Meribel and Val d’Isere, France. The ambassadors seed the brand among potential customers at summer music festivals, beach and ski resorts, and university campuses.

In the U.S., the retailer began recruiting seasonnaires at Harvard and Yale in 2006; had them blanket Martha’s Vineyard and Nantucket last year handing out product, gathering names and addresses of potential clients, and hosting a silent disco and dinner on the beach for “friends” of the brand, and now has collegiate reps (who get free outfits in exchange for feedback) at Dartmouth, Tufts, Boston University and elsewhere.

According to Olly Finding, Jack Wills’ international marketing manager, the ambassadors aren’t only spreading the word — they’re also potentially future staff as the brand expands to other university towns and upmarket resorts.

One of the great touchstones of the brand is the cult, 1987 dark comedy “Withnail & I,” about two feckless young men and their adventures with an eccentric uncle. The brand also channels the disheveled glamour that young British aristocrats do so well: It’s “Brideshead Revisited” meets Glastonbury. It’s Prince Harry after a trip through the Duke of Windsor’s closet.

“It’s a contemporary brand grounded in heritage; We like to create a tension between formal and casual, and we like to take pieces out of context,” said Williams.

He is clear about Jack Wills’ mission. “We are not breaking great design boundaries, but we do have a big design team and stay sufficiently close to the trends,” he said, adding that Jack Wills doesn’t need to be about fashion. “There is an authenticity to this brand that epitomizes the lifestyle of our core customer.”

Williams and Shaw own 70 percent of the company, while 27 percent is held by Inflexion Private Equity, which bought a stake in 2007. The remaining 3 percent is held by senior management. And while Williams and Shaw may be relatively new to the business, there is no lack of retail expertise: Rose Marie Bravo is a non-executive director and Peter Saunders, former chief executive officer of the Body Shop, is chairman.

Williams said the company has no debt, and has been funded by cash flow since the business began. All of the creative is done in-house, including the catalogues and store design, of which Williams is particularly proud.

The brand is expanding on a number of fronts: In 2008, Williams and Shaw launched Aubin & Wills, aimed at the 25- to 35-year-old demographic. That collection, which has sales of about 4 million pounds, or $6 million, also has a bohemian vibe, but is more sophisticated and lower-key than its wilder sister.

Geographically, the U.S. market is only the beginning of worldwide expansion, said Williams. “There is a global opportunity for the brand, and we have a high degree of confidence that it can travel. We believe there is significant opportunity in North America, Asia, Europe, and the Middle East,” he said. “This could be a multibillion- pound business.”

Williams acknowledged that despite the double-digit growth, there are big challenges ahead: “How do we ensure we’re always appealing to our customer? How do we not overextend ourselves, and how do we build the right infrastructure for tomorrow?” he said.

There are no plans — at least not now — to take this business public or to sell it, Williams said. “We’re still building the business and creating value. And my philosophy is that I’ll do this while it’s still fun. I feel very privileged to be doing this job. And Rob and I will likely be here until we’re too fat — or too old — to do it anymore,” he said.