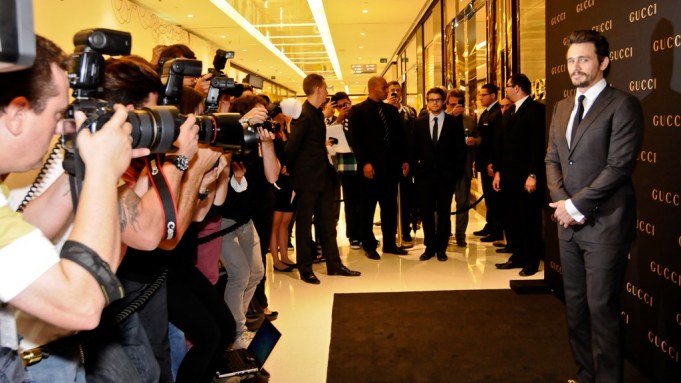 Franco packed light for the three-day trip, bringing only a carry-on bag. “I am like George Clooney’s character in ‘Up in the Air,’ with a diamond card,” said the actor, screenwriter, director, author and teacher, who’s on a plane twice a week.

While in town, he visited the 30th edition of the São Paulo Biennial art exhibition, had lunch at Figueira Rubaiyat, in the upscale Jardins area, and shot a fashion spread for GQ’s Brazilian edition, due out in December.

A small crowd gathered in the store, located in the JK Iguatemi shopping mall, and waited for about 90 minutes to see Franco, who wore a black custom suit with white shirt and tie, all made in Florence. On his feet, he wore Gucci’s 1953 moccasins with a golden horse bit. These are key draws at the São Paulo store and are sold in the back room, which is dedicated to made-to-measure.

“Shoes are bestsellers here,” said Roberto Paz, the new president of Gucci Latin America. He explained that men buy mostly off-the-rack shoes — made-to-measure pairs cost up to three times more and take six weeks to deliver. “The men here are more immediate, they need to be educated to wait.”

“We are doing surprisingly well,” Paz said, noting that a Gucci men’s-only store is on the radar for Rio as well. That store would carry a more casual assortment better suited for the hot weather — quite different from the São Paulo offering.

Paz, a native of Piauí who was raised in Rio de Janeiro, has spent most of his career in Europe and has worked for Gucci for the past two decades. In January, he will spearhead the opening of the company’s first office in Brazil, which will be staffed with 20 people in areas ranging from financial and operations to merchandising.

It’s a clear sign of Gucci’s growing interest in Brazil. The brand opened four stores in four years — the fifth one, an accessories store, will open in Rio at the Village Mall shopping center in December. After Champagne in the store, Gucci hosted a premiere of two of Franco’s latest short films — “Joan of Arc” and “Dionysus” — at Número, a bar in the Jardins neighborhood.