Against the backdrop of a recession, Tokyo’s trademark theatrics were kept to a minimum.

By Amanda Kaiser and Koji Hirano on March 31, 2009
View Slideshow 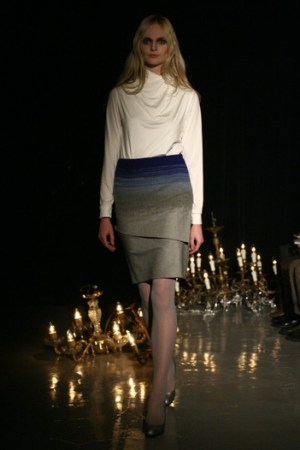 TOKYO — It’s a wrap — wastepaper and all.

Against the backdrop of a recession, Tokyo’s trademark theatrics were kept to a minimum. There were still plenty of quirky clothes — such as writtenafterwards’ show featuring models clad in sculpted lumps of crumpled paper, duct tape and tin foil — but gone were the drag queens dancing in their underwear and the ponies on stage. For the most part, Japanese designers exhibited a newfound sense of maturity and channeled it into more wearable collections.

Highlights of the week included Matohu’s chic, modernist take on kimono-style dresses and coats, Reem’s Victorian-punk confections in tulle and Akira Naka’s sleek knit-accented tailoring. In keeping with past seasons, some of Tokyo’s most interesting collections were shown off of the official calendar, such as Monday’s Dress Camp show inspired by opium divas and Fritz Lang’s seminal film “Metropolis.” Macedonian designer Marjan Pejoski sent out a series of body-clinging minidresses adorned with gold and floral accents, as well as velvet patchwork pieces and chain-mail tops.

Unfortunately, the official attendance figures indicate the government-subsidized JFW has a way to go before becoming a must-see event on the international fashion circuit. Attendees totaled 15,970, down 16.4 percent from the same season last year. While the number of foreign journalists grew by 17 to total 218, only 37 foreign buyers came to Tokyo, down from 41 a year ago. JFW’s organizers blamed the attendance drop on some houses’ decisions to use smaller venues or opt for presentations.

Buyers here downplayed the significance of attending runway shows and said they preferred to do their business via private meetings and showroom appointments, where they can see the collections up close and develop stronger working relationships with their suppliers. Meanwhile, Hajime Nakagawa, the casualwear and young women’s apparel buyer for Isetan Co. Ltd., noted the ongoing problem with Tokyo’s calendar, which often extends for more than a month beyond the official fashion week with shows and presentations. He suggested fashion week try to coincide with Rooms, an edgy apparel and accessories fair here, to lure more buyers.

“There is enough fashion in Tokyo compared with New York and Paris, but JFW shows only a part of it,” he said. “For overseas buyers to come, the collection schedule has to be reconsidered.”

Despite some attendees’ tepid response to the week, Nobuyuki Ota, chief of JFW’s collection project committee and president of Issey Miyake, noted the quality of the design coming out of Tokyo is improving.

“The younger generation — season by season — they are getting stronger I believe in their own way,” he said, adding he plans to reach out to designers elsewhere in Asia to broaden the week’s geographic scope.

One of JFW’s most highly touted initiatives this year was Shinmai Creator’s Project, a design competition that aims to lure international talents to Tokyo and promote the use of Japanese textiles. Richard Collasse, president and representative director of Chanel Japan KK, chaired the selection committee. The five winners staged a show during the week and Isetan will sell their products for two weeks in June.

“One [objective of the project] is to make Japan Fashion Week much more international, open to the world, because the Japanese sometimes have a bit of difficulty doing that,” Collasse said. “I’ve always wondered why Tokyo — being such a creative city — they’ve never been able to become an international fashion place.”

In terms of business, designers have to contend with the ongoing global recession and department stores that are hesitant to take on the risk of buying collections from small labels.

Miyako Sekimoto, fashion director at Ginza-based department store operator Matsuya, said overall she is impressed with the improving quality of Tokyo-based designers, but she doesn’t have much space in her store to dedicate to them. If and when the store wants to introduce a new brand, it often opts to do it on a trial basis before making a full-fledged commitment.

“We have to be very careful. People don’t want to pay so much money for luxury brands,” she said of the retail climate here.

Specialty stores are often more likely to carry the smaller labels that show during JFW. Takatomo Ogawa, a representative and buyer for Narastore in Nagoya, said his favorite labels included mintdesigns, tiny dinosaur and suzuki takayuki.

“In this economic situation, I am putting more effort on keeping loyal customers excited with refreshing ideas such as new prints and items like accessories…rather than flattering new consumers with superficial cheap tricks,” he said. “During the shows of mintdesigns and tiny dinosaur, I had a clear image of which of my customers would buy certain items.”

The presence of star fashion bloggers Bryanboy and Diane Pernet, replete with her signature black veil, helped enliven the front rows at several collections, including G.V.G.V., Mikio Sakabe and Akira Naka. Pernet, in town to present her traveling film festival, held court with the local fashion set at a Friday night party at chic epicenter Le Baron de Paris. The bash doubled as a late birthday party for Bryanboy, who was surrounded for much of the evening by MTV cameras.

Despite the relative frenzy surrounding his Tokyo visit, the Manila-based blogger said he was largely underwhelmed by the fashion week here. “It’s like a tiny scene,” he said. “I was expecting something more hard-core.”

Another buzz-inducing development came midweek when JFW removed two brands from its official calendar a day before their runway shows. JFW organizers allege International Fashion Association, an agency promoting the brands Polanka and Mode Acoté, was selling show tickets for 25,000 yen, or about $256, contravening JFW regulations. The International Fashion Association did not respond to a request for comment.