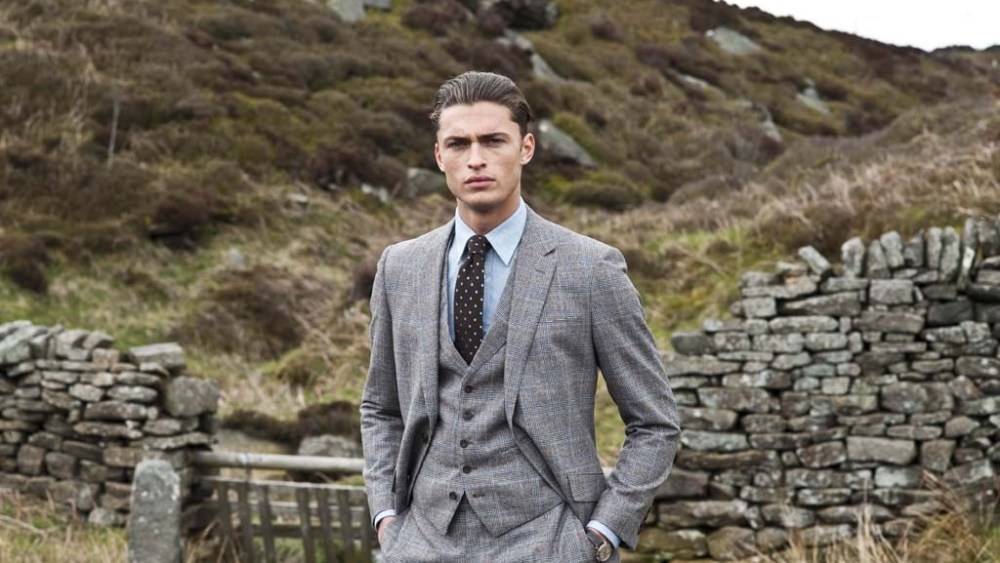 LONDON — Jason Basmajian, Gieves & Hawkes’ new creative director, is adamant that more than 200 years of history, three royal warrants — including one from Queen Elizabeth — and a renowned address on Savile Row will not weigh on him or his vision for the company.

Basmajian, who arrived in January, having previously worked as artistic director at Brioni, has big plans to help transform the venerable men’s wear label, which relies heavily on the U.K. and Asia, into an international luxury lifestyle brand.

Basmajian said his mission is straightforward. “We are a bespoke house, and I’m trying to take it back to its origins of very high-quality tailoring and at the same time make it all absolutely relevant — whether that’s within the context of the global luxury men’s wear landscape or in the context of Savile Row,” said the energetic Basmajian during an interview at the tailor’s flagship at Number 1 Savile Row.

His plan is to reinforce Gieves’ position as a bespoke house making everything from regimental uniforms for the royal family to three-piece suits for natty British businessmen, and to channel the company’s spirit and expertise into ready-to-wear and accessories collections, the Web site and the marketing.

“What we didn’t have was a cohesive collection, we didn’t really have style direction, and we were very much focused on mono product: the suit. Very quickly, we have tried to round up the collection to include lifestyle, sportswear, casual dressing, softer dressing, and bring back some of the country and tweed elements that we had missed,” he said.

There are new collections in the pipeline, plans to unveil eyewear and leather goods in January at London Collections: Men and a footwear range that is all bench-made in England. He is also revamping the Web site with better imagery and technology, and looking seriously into wholesale distribution.

One of the new offers will be a capsule collection known as Hand Tailored in Britain, which will be made in the U.K. using British piece goods. It will launch in September, with starting prices of suits at 2,500 pounds, or $3,777 at current exchange.

“It’s all done by hand in a very small factory in England,” said Basmajian. “For me, it had to be something completely inspired by bespoke. So from September, you will be able to walk into Number 1 Savile Row and buy a beautiful off-the-peg, fully canvased, made-in-England suit with bespoke inspiration.”

Later this month, Basmajian will unite the rtw and bespoke teams at the Savile Row flagship so they can collaborate more.

The store will also undergo refurbishment, with work set to be completed in the spring. Basmajian and his team are planning to create a private tailoring space with a concierge, whisky and cocktail bar, gray flannel walls and a working fireplace.

“It will be a place our clients can use for a meeting, and we love the idea of a wedding party and booking with your buddies to set up a poker game, get some whisky going and get your wedding suits made at the same time. I want the store to have a feeling of like a men’s club,” said Basmajian.

He said the refurbished store will have a “domestic” feel and flow with a lighter color palette, iron and brass fittings and fixtures, handmade rugs and specially designed furniture. Service, he said, will be a priority. “Whether you come in to buy a tie or a bespoke military uniform for your entire entourage, we are going to put in the same dedication and commitment to service,” he said.

Basmajian is making the changes under the aegis of Trinity Ltd., the publicly held Hong Kong-based owners of Gieves & Hawkes, Kent & Curwen and Cerruti. Trinity is part of the retailing arm of Fung Group, parent of the sourcing and manufacturing giant Li & Fung.

Basmajian has been working alongside Gieves’ managing director, Ray Clacher, who said the three-year plan beginning in 2014 will see Gieves grow its revenue by 50 percent.

“There is a tremendous appetite for genuine British lifestyle brands, and we intend to lead the U.K. in men’s tailoring and sportswear,” said Clacher in an e-mail.

“Jason has reinjected a new vigor into our product proposition across ready-to-wear, private tailoring and bespoke men’s wear. We will completely revamp our digital marketing and focus on bringing a modern interpretation to men’s formal tailoring with a state-of-the-art Web site and social media campaign.”

In addition to the London flagship refurbishment, Clacher said the company is remodeling its U.K. provincial city stores, beginning with a new store concept in Chester, England.

The company will also open a new 2,000-square-foot store in Hong Kong’s Central District in September, and it will be the first store in the region to focus solely on bespoke, private tailoring and the Hand Tailored in Britain capsule collection. There are also plans to open a Singapore flagship in time for the 2014 Chinese New Year.

Clacher said going forward, “Our focus shifts to balancing our growth in Asia with a drive to open wholesale and concession doors in Europe and U.S.”

That strategy to push into Europe and the U.S. comes from the top: Victor Fung, chairman of the Fung Group, said in Trinity’s most recent annual report: “In an age when it is widely believed Chinese consumers will soon become the biggest buyers of the world’s luxury brands, they are increasingly looking to the fashion capitals for inspiration and guidance. It is critically important to take the group’s authentic and heritage luxury men’s wear brands to their next level of being internationally recognized brands.”

The company’s Web site is going to get a makeover in the next six to nine months, with a broader e-commerce offer that will allow customers to buy the full range of products, to shop by look, or even to “build a suit” online, with support from a tailor on the other end of the phone. “Bespoke is a growing business for us,” Basmajian said.

The site will also feature a short film made by the director Mike Figgis, of “Miss Julie” and “Leaving Las Vegas” fame, on location at Harewood House, a stately home in Yorkshire. The images will be used online and as part of the company’s ad campaign.

The site will also feature a short based on an old Pathe how-to film, “How to Get Dressed in 90 Seconds,” that will star Jake Parkinson-Smith, the nightclub entrepreneur and pal of Princes William and Harry.

Basmajian said the mood he’s going for is “old-school revisited. This isn’t about reinventing anything. You don’t reinvent 240 years of history, you build on it and write a new chapter.”