J.P. Morgan Chase & Co., the largest U.S. bank with $2.74 trillion in assets, has been relaxing its starched shirt and black suit dress code incrementally since 2016 when its color palate was expanded to navy and gray — gasp! for suiting — along with layering pieces such as sweaters and vests.

If it all sounds a bit dull, that’s because banks aren’t supposed to be exciting. That’s best left to the movies, whose bank scenes often involve robberies. And yet, Chase wanted its branch employees to have a little more color in their lives. So, it added new fabric options, including patterned shirts and blouses; chambray shirts and dresses, and performance fabrics for comfort and freedom of movement.

Chase in the spring allowed branch employees to wear jeans to work any day of the week — and that was big news. On Tuesday, Chase announced a collaboration with Jason Wu, who designed a mini collection for the company’s 45,000  branch office employees. While not all may opt to wear items from the Jason Wu collection, they’ll have an opportunity to order it through Chase’s apparel program.

“People who work at banks aren’t always associated with high fashion,” Wu said in an interview with WWD. “I wanted to do something that really changed that perception. I wanted to design something that the people at Chase would look amazing in and love. The collection is really the first of its kind. Designers do uniforms for hotels and airlines, but that’s never really been done in the same way the for banking industry.”

Wu said he didn’t approach the project as if he were “designing Chase uniforms. I make clothes that women want to wear, and even guys want to wear. Chase has a whole catalogue of clothes that employees can pick from. I wanted to offer something different. Their approach is modern, and, really, design-led.

The Chase branch apparel program draws on equities of the brand with navy and gray suiting, then provides opportunities for personalization through fabric choices, color options and accessories such as ties, including bow ties, and scarves in fun colors and patterns, so “branch staff can let their personalities shine through,” Chow Hansen said.

“Today, so much is about individuality,” Wu said. “The idea of a uniform has really changed. It’s not as strict anymore. People want to show their personalities and want to feel like themselves, even when they’re at work. The challenge was designing something that’s a uniform, but doesn’t feel stuffy.”

Wu opted for blues and purples to give an elevated, modern wink to Chase’s main colors of blue and gray. A subtle octagon, the bank’s symbol, is barely perceptible on a sleeveless white blouse with blue flowers, while a diminutive white version of the logo appears near a flower cluster on the navy tie-blouse.

“The design was about incorporating the logo so that it was part of an interesting motif,” Wu said. “It was really considered. I looked at Yves Saint Laurent designs with logos hidden in the Seventies prints. I wanted to do that with the Chase logo, especially, the floral print. To make the Chase logo part of that flower print was fun. The idea is that people can wear the pieces outside of work. It’s a new take, and very modern. At the end of it all, people want to look good and feel good at every moment.”

“Collaborating with a world-renowned designer such as Jason Wu, who has dressed some of the most iconic women in the world, including then-First Lady Michelle Obama and Duchess of Sussex, Meghan Markle,” was a coup for Chase, Chow Hansen said. “Branch employees appreciate the simple elegance and contemporary sophistication of the mini collection. You see that in Jason’s collection and ready-to-wear. There’s a specialness and acceptability. We want relatable and sophistication.”

Wu said he’s actually considering translating some of his Chase learnings into a lower-priced line. “People are buzzing about [the Chase] collection. There’s definitely an opening, but we want to see. We’re going to test the waters. The [Chase] white blouse sold out in a matter of a couple of weeks. We’re bringing people into the fold and offering beautiful design for everyone. That’s really possible today with really amazing manufacturing capabilities paired with intelligent design. Yes, we’re considering a lower price point.”

Chase branch employees can meet the company’s sartorial guidelines by shopping its two annual collections in the fall and spring, where Wu’s line and a new denim collection bowed in the spring. Men’s and women’s apparel is modeled along traditional gender lines, but that’s changing. “What’s really interesting is that fashion is blurring across the two [sexes],” Chow Hansen said. “There was a branch colleague wearing the Jason Wu bow ties. She said, ‘I love them, they’re so stylish.”

The catalogue, Hansen said, is a way of ensuring Chase stays on-trend and relevant. “We want branch employees to look professional, yet relatable to consumers,” she said. “Our new branches are modern, with open floor plans. We want the uniforms to be comfortable, but this isn’t just about clothing. It’s about helping employees look and feel their best, so they’re confident in their own skin. We want the Chase clothing collection to spark conversation and make the experience feel personal and approachable, not transactional. That will help them to give their best when serving customers. 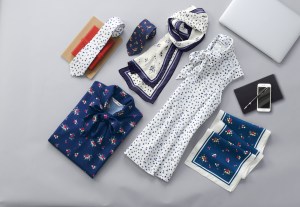 “We need to simplify so we can elevate. Jason does that really well,” Chow Hansen added. “Jason had a wonderful recognition of the diversity of our front line and embraced it with sizes 0 to 34, and XXS to XXL. All but three sizes of the 28 have sold out — and the collection just launched.”

Before the idea of a collaboration was broached, Wu was invited to be part of Chase’s Mastery ad campaign, which showcases people who are masters of their craft how Chase technology seamlessly helps them get through their day. Chase filmed a TV spot with Wu and his pet cat that showed the using Chase QuickPay with Zelle to compensate his cat sitter, while he multitasked, putting the finishing touches on his collection backstage at New York Fashion Week.

“We really picked him for being a master of his craft,” Chow Hansen said. “We were so impressed, we wanted to extend the collaboration with him to include an innovation for our longstanding Chase apparel program.”