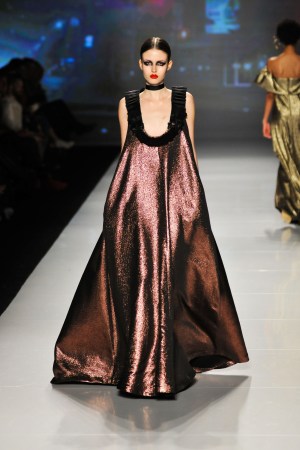 TORONTO — Jason Wu received the International Designer of the Year Award at the Canadian Arts & Fashion Awards, which were held at the Fairmont Royal York Hotel here.

The event was hosted by Kim Cattrall. Other awards went to Frank & Oak, which received the Joe Fresh Fashion Innovation prize; 20-year-old Herieth Paul, who won Model of the Year, and Wayne Clark, who was recognized for Outstanding Achievement.

Wu said winning at CAFA was “humbling,” adding that the recognition “comes from a place that has given me so much.”

At age nine, Wu moved from his birthplace of Taipei, Taiwan, to Vancouver, where he began designing and sewing for dolls. “Canada is where it all began,” said the designer, who recently revealed the June launch of Grey Jason Wu, a new sister label for women. The collection, priced from $295 to $1,395, will be available at greyjasonwu.com and select retailers.

“I am very proud of everything I have accomplished. But this CAFA award allows me to further showcase the world of Jason Wu,” he said.

Kirk Pickersgill and Stephen Wong of Greta Constantine are also eager to showcase their brand after winning CAFA’s Womenswear Designer of the Year Award. Nominated twice before in the same category, Pickersgill and Wong said the win was “a milestone” for them.

“We just celebrated our label’s 10th anniversary. To last that long in today’s industry is a big deal. This win was definitely a pat on the back,” Pickersgill said.

“It also gave us the encouragement we needed, especially now as we are experimenting with fabrications and looking at new ways to express the fashion feel and creativity of our label,” Wong added.

Vancouver label Wings + Horns received CAFA’s Menswear Designer of the Year Award. “This win and the increased exposure will help us reach new customers who have yet to discover our brand,” said Wings + Horns designer Tung Vo. “It also helps solidify our place within North America’s menswear market.”

Launched in 2014, CAFA was created as a national platform to foster Canada’s emerging fashion talent, both at home and abroad. CAFA also pursues year-round economic development initiatives as part of its mandate. “Canada has a unique voice and story to tell,” according to Brittney Kuczynski, CAFA’s founding director.