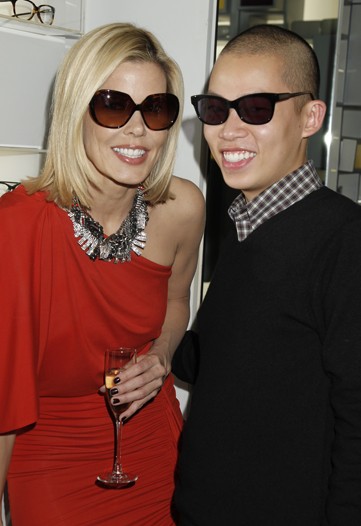 The optical looks range from dainty frames with a subtle cat’s-eye and metal details (Viola and Jane) to larger, more outsize shapes (Scout and Josephine). Though the sunglasses and optical frames are geared for a female market, the Jett, Earhart, and Scout offerings are considered unisex.

During a launch party at Ilori boutique on Spring Street in SoHo Thursday night, the designer said he started his eyewear line last year because “when I was thinking of accessories I thought, what is the one thing that’s iconic for actresses and memorable women? Every iconic woman is known for her sunglasses.” As for Wu’s preferred pair of shades, it’s the Eighties Jett style.

“Most people don’t consider them fashion,” he said. “I actually am really nearsighted and I never can find the glasses I want to wear.”

The palette for the entire eyewear line, produced with Modo, was inspired by artist Robert Rauschenberg’s vibrant work, which is also Wu’s theme for his resort collection. The designer said the seamless interplay between his apparel and eyewear lines is “a natural thing.”

The frames are available in stores and retail from $255 to $375 at specialty boutiques like Ilori and major retailers such as Bergdorf Goodman. The collection will also be available internationally in Korea, Japan, Taiwan, China and throughout Europe.

Beyond his ready-to-wear line and eyewear collection, Wu is also involved in a limited collection of Tse Cashmere, and has hinted at a footwear line and additional accessories offerings, as well.

Regarding his hectic pace, Wu said, “I go to work at 9 a.m. and I go home at 9 p.m.…I wouldn’t have become a fashion designer if it wasn’t something I loved doing.”

Wu does find time to indulge in activities unrelated to fashion — he plans to take a pastry-making class. “Thirty years from now, when my business is global,” he said, “I’m going to open a cafe that sells potpies and fruit pies. I’m all about the pies.”