The new investment firm leans on the fashion expertise of Gary Wassner and Allen Questrom. 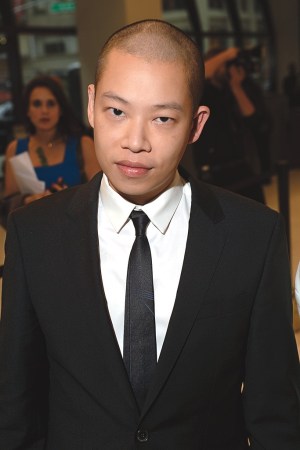 NEW YORK — Jason Wu sold a controlling stake in his business to InterLuxe — a new investment firm that leans on the fashion expertise of Gary Wassner and Allen Questrom.

This story first appeared in the September 5, 2014 issue of WWD. Subscribe Today.

The designer, who unveils his spring collection on the runway today, plans to use the new funds to open a flagship and expand his budding e-commerce and handbag businesses.

InterLuxe is backed by Lee Equity and chaired by Gary Wassner, who supports much of the New York designer community as co-chief executive officer of the factoring firm Hilldun. A ceo with a fashion background is expected to be named today.

Although neither Wu nor Wassner disclosed the terms of the deal, a source familiar with the transaction said the investment house bought control of the firm, which has revenues in the neighborhood of $20 million.

InterLuxe is one of a growing number of investors targeting designer businesses, trying to both build up brands and catch a little of the lightning that has driven the likes of Michael Kors Holdings Ltd. and Tory Burch to multibillion-dollar valuations. Clifford Moskowitz, who has a background in private equity, serves as InterLuxe’s president.

Investors are largely looking for brands that have established businesses and solid name recognition, but plenty of room to grow.

In an interview between fittings at his studio Thursday, the 31-year-old Wu said, “I don’t know if I should feel good that people call me a young designer or not so good now….It’s a young business. I’m not a young designer.”

Wu started his business eight years ago and described Wassner as “my first supporter.”

“I’ve known him for a long time, so when the new venture came out with InterLuxe as a platform to help designers grow to the next level, I decided after months of talks and discussions that this was the right opportunity for me to take that next step,” he said.

Wu said the “trust factor” with Wassner was key to the deal, which the designer hopes will carry the business into a new phase.

“The next level is really refining, defining and expanding the product offering, thinking about retail…being very serious about establishing a strong e-commerce platform and putting some serious concentration on the leather goods category, mainly handbags,” he said.

The brand has 190 points of distribution as well as a limited e-commerce site.

Wu, who will also continue to design the women’s collection for Hugo Boss, said the deal would let him bring in more help, although the future structure of the company hasn’t been determined.

“I feel great that I can just have the support to really be able to concentrate on what I signed up to do really from Day One, [which] was to design and to create and to run a successful fashion business….It just means I have more expertise and support around me to be able to do what I do better,” he said.

Wu, who carries the title of chief creative officer, said he can reach a broader audience for his own brand.

“We did Target two years ago,” he said, referring to his collaboration with the mass market chain. “That was great for us. The TV exposure was great. It allowed me to bring my brand — through fashion, not through anything else — to a bigger audience that cannot yet afford my main collection. Those customers are my future clients as I grow into other product categories. I’ve always been very vocal about establishing the world of fashion, it doesn’t stop with the clothes.”

Wassner described Wu as something of a complete package in the business of fashion.

“I work with a lot of designers,” he said. “Some of them don’t want to hear about the business side, they’re not interested in it, they don’t care what things cost. With Jason, both sides of his brain work. He’s particularly adept at understanding, both the business and the artistic side of fashion…he’s not trying to be the cool kid on the block. I like that.”

For Wassner, InterLuxe is a way to stay involved with companies once they’re ready to take the next step.

“It’s a natural progression,” he said. “We bring the brand to a certain point…and then they need a partner.”

Wassner said InterLuxe was looking to provide infrastructure for smaller companies with $15 million to $100 million in sales. He also wants to stick with the brands InterLuxe invests in.

“We don’t have a fixed exit strategy,” he said. “We look at LVMH [Moët Hennessy Louis Vuitton]. We look at Kering. We look at what they do, building brands, not turning them over quickly, creating real brand value globally.”

Wassner said InterLuxe started with a list of a few hundred brands as potential targets. That list has been whittled down to about five.

“We’re sorting them and filtering them down for many reasons, personality of the designer, can you work with them…is it scalable? We’re in negotiations. I’m at fashion week and I’m looking at every brand,” he said.

Questrom — who has served as ceo of J.C. Penney, Federated, Barneys New York and Neiman Marcus — has worked with Lee Equity for a decade and said Wassner’s contacts and the private equity firm’s business acumen have been a good combination.

“We’ve been looking to buy several other brands because we think you need a stable of these brands,” Questrom said. “It’s very difficult to make it happen with just one, because you’re going have some that fail and some that succeed. We need several in order to make it something worthwhile for us to do.”

The more Questrom got to know Wu, the more he liked the designer.

“Jason has very big name recognition,” Questrom said. “He makes a very good product. I’m really getting to learn a little about him and the line. I’ve been impressed by his manner and the way he goes about it.”

It might be a good thing for designers to have more people knocking on their door. Kim Vernon, president and chief executive officer at the Vernon Co. consultancy, said investors are starting to look closer at smaller fashion companies with growth potential.

“We’re seeing a little bit of a trend — getting away from the competitiveness of paying high valuations [for bigger companies],” Vernon said. “Some of the funds are walking away from that. This is exciting. I think it’s what our industry needs.”

And for designers needing some financial help, the shift could signal a financial windfall.