The designer discusses his first women’s collection for the German brand and the shoot for the “This Is Boss” short film. 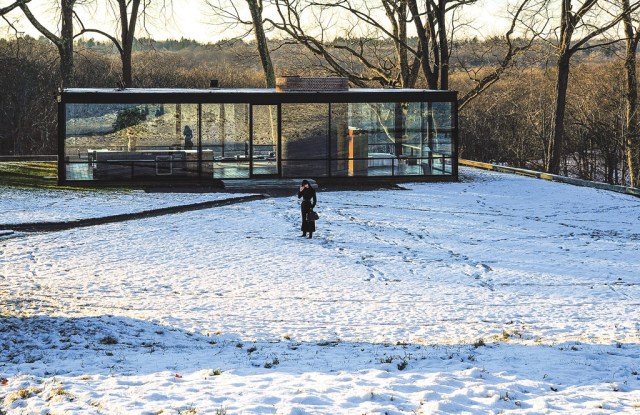 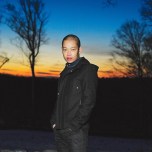 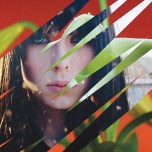 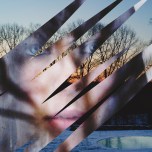 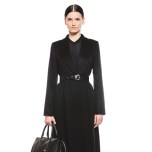 On a freezing Friday in December, the Philip Johnson Glass House in New Canaan, Conn., had been taken over by a sizable film crew — or rather, a fashion film crew. There were RVs for styling and catering; chips and salsa; generators; packs of idling black SUVs; curators and groundskeepers; cliques of production staff perpetually in waiting; real snow; fake snow, and, at the center of it, Inez van Lamsweerde and Vinoodh Matadin shooting model Edie Campbell for a brief impressionistic video for Hugo Boss.

This story first appeared in the January 28, 2014 issue of WWD. Subscribe Today.

“Now stop! And run to the right! Now stop! Run fast! Turn to the back! Run back! A little faster!” called a voice from a megaphone, directing Campell, who obediently sprinted to and from the house.

Off to the side shivered Jason Wu, as of last June Boss’ artistic director of women’s design, who described the scene at hand as “Part one of my venture with Hugo Boss. It’s the first creative piece we’re launching.” Part two is his Hugo Boss fashion show. Scheduled for Feb. 12 during New York Fashion Week, it’s not only Wu’s debut collection for the company but also its first women’s-only runway show and the first time on the official New York calendar.

Meant as a teaser of Wu’s new vision for the line, the film, titled “This Is Boss,” will be released Feb. 7 on the Hugo Boss Web site and through various social media. The Glass House was chosen for its “perfect juxtaposition between architecture and nature” that Wu sees as ingrained in the brand.

“When I first visited Hugo Boss in Germany, this is what the campus kind of looks like,” he said. “Metzingen is a small town, and there are glass buildings and cubes rising from the middle of the woods.”

Van Lamsweerde and Matadin have shot the last three print campaigns for Wu’s own line, but this is the first time they’ve worked on a video together.

Campbell was cast for her “personality,” said Wu. “There’s some edge about her, yet there is some sense that she is interesting and you want to know more about her.” Joe McKenna styled.

A rough cut of the video, shot over two days and clocking in at one minute, 14 seconds, depicted Campbell wearing a black cashmere trench, black silk shirt and black pants, as well as a black shift with a cutout neckline. She’s seen inside and outside the house, in close-ups and landscape shots, along with some footage of a strappy pair of high heels. Throughout, the film is spliced with digital effects such as graphic streaks and blooming flowers, and set to a techno soundtrack. It would not look out of place running on a loop at a club, say, in Berlin.

“It’s a fashion-image piece that gives you a visual representation about the Hugo Boss woman I had in mind, and who she should be,” said Wu.

That begs the question: What do Hugo Boss women’s clothes look like?

Drawing a blank? That’s because Boss women’s, launched a little more than a decade ago, has failed to establish a strong identity and not for lack of resources. A certifiable megabrand that’s on target to be a 3 billion euro business by next year, Boss’ power is in men’s wear. The women’s collection accounts for between 11 and 12 percent of the business, according to chief executive officer Claus-Dietrich Lahrs. Wu’s mandate is to change that — within reason.

“We are so strong and powerful with men’s; men’s will always be more important,” said Lahrs. “But we think we can grow the proportion in women’s.”

Charged with managing all things image-related in terms of the women’s collection, Wu is revamping the clothes, the shoes, the bags, the hardware and the label, which will be white on white. There’s also eyewear and fragrance, for which he’s working with Proctor & Gamble Co. and Gwyneth Paltrow, who was shot for a fragrance film by Jordan Scott, daughter of director Ridley Scott, forthcoming this year.

“The first order of business was to really dig into the DNA of the company,” said Wu. “To go visit, to learn about the history of the company, to know where it came from, where it was yesterday, what it is today and what it can be tomorrow.”

Given a German brand with a substantial men’s business, it’s not surprising that tailoring plays a big role in Wu’s new look for the label. It was hard to extrapolate the scope of his direction from the black coat, shirt and pants featured in the video shoot, but Wu said the fall collection would temper his signature feminine sensibility with structured rigor for which Boss is known. The idea is to deliver a jolt of sex appeal and attitude to the existing image.

“We do have a fantastic collection for professional women,” said Lahrs. “Jason has a very good eye for detail. He can redevelop existing strengths but come up with something completely new — what women with a strong professional background will look for.”

Wu launched his own collection seven years ago, and was put on the global stage in 2009 when Michelle Obama wore his dress to the Presidential inaugural balls, which she did again last year. While that raised his brand profile exponentially, his business is small compared with the Boss behemoth.

“It’s been a really educational experience,” said Wu. “Within the last six months I’ve gotten to work on a lot of bigger-scale things that I’m not used to with my own brand.”

“It’s challenging to have two jobs — a 24-hour day job and night job,” said Wu. “It felt like it was the right time to take that next step and do something really different from my brand. It has a different look and shows my range as a designer.”