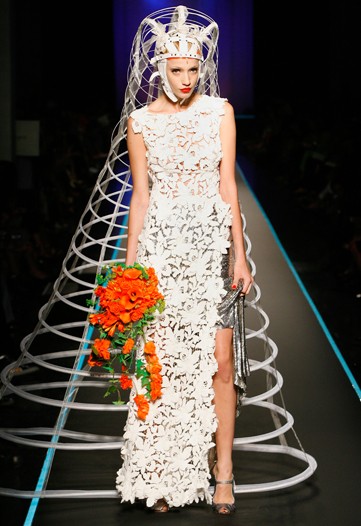 The Montreal expo will showcase about 120 ensembles, a good number of them couture creations, alongside sketches, photography and audiovisual elements. These include clips from films the French designer has costumed — by directors including Luc Besson, Peter Greenaway and Pedro Almodóvar — along with videos showcasing collaborations with choreographers and pop stars, from Lady Gaga and Kylie Minogue to Madonna.

The museum said the exhibition will be organized among five themes: Paris, Fusions, Multi-Gender, Eurotrash/X-rated and Metropolis, spanning key themes explored by French fashion’s favorite enfant terrible, today the designer behind everything from fragrances and men’s wear to home furnishings.

Gaultier showed his first ready-to-wear collection in 1976, entering the high fashion realm in 1996.

Nathalie Bondil, museum director and chief curator, said what attracted her to Gaultier as a subject over other couturiers was his “open-minded vision of society, a crazy, sensitive, funny, sassy world in which everyone can assert his or her identity.”

The museum tapped Montreal theater company UBU to design the exhibition, including the mannequins.

A 424-page book to accompany the showcase is to feature interviews with the likes of Catherine Deneuve, Pierre Cardin, Dita Von Teese and the reclusive Martin Margiela, the retired Belgian designer who started his fashion career at Gaultier.