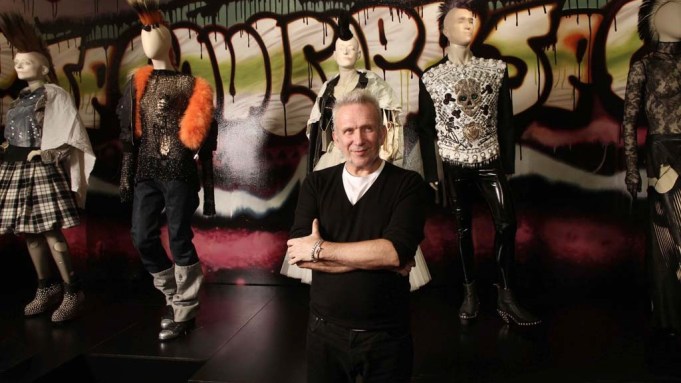 NEW YORK — Jean Paul Gaultier has been to New York many times, but only made it to Brooklyn once before this trip, in the early Eighties, for a very special destination. “To go the club from ‘Saturday Night Fever,’” he said, recalling the late-Seventies Bay Ridge discotheque where Tony Manero types (and, apparently, Gaultier too) did the hustle. His second outing is for far more substantial reasons: “The Fashion World of Jean Paul Gaultier: From the Sidewalk to the Catwalk,” the designer’s traveling retrospective, is opening at the Brooklyn Museum on Friday.

Gaultier arrived here on Saturday night for a full-week media blitz, and, time permitting, the chance to familiarize himself with the borough. “To be honest, I don’t know Brooklyn,” he said on Monday afternoon at the museum. It didn’t take much time — and a visit to the Brooklyn flea market — to tune into Brooklyn’s artier vibe, which appealed to him from the get-go. “I don’t feel like a young artist at all but for me it’s excellent, ” he said. “The museum is beautiful. It’s so American in its proportion but great with so much variety. I am honored to have been invited.”

The exhibition, which was previously on display in Montreal, Dallas, San Francisco, Madrid, Rotterdam and Stockholm, will run in Brooklyn through Feb. 23. After New York, there are plans for London and Melbourne.

The 150-piece lineup, curated by Thierry-Maxime Loriot, includes Gaultier’s most iconic pieces, like Madonna’s original cone-bra bustiers and bare-breast suspenders, and looks from his collection inspired by Hasidic Jews in Brooklyn. There are several pieces that haven’t been exhibited before, including a glittery jumpsuit worn by Beyoncé, Beth Ditto’s corset and a dress modeled by the androgynous Andrej Pejic.

The exhibition touches on various aspects through its installations, from a boudoir section to a room mimicking Amsterdam’s red-light district, and another that explores the influence of punk and the street on Gaultier’s ethos, replete with graffiti-painted walls. There is also ample photography material and Gaultier childhood mementos to round out the designer’s profile. For his part, Gaultier hopes visitors will “not be bored but surprised and amused, and have a good time and fun.”

A major concept is the muse and how she impacted his creative impulses, a notion he likens to the plot of the French movie “Falbalas,” one of his evergreen inspirations. “If I do fashion, it’s because of ‘Falbalas,’ which is a movie from the 1940s, before I was born,” he said. “It was about a couturier at a Paris couture house, inspired by a woman to give him the idea for a collection. He made a beautiful collection because he was in love with her. It was so explicit, so perfect in its descriptions of the workings that when I started to work at Cardin and Jean Patou, I thought, ‘Oh, but I am in Falbalas.’”

Gaultier has had plenty of muses along the way, from Rossy de Palma to Linda Evangelista, Coco Rocha, Anna Pawlowski and Farida Khelfa, “some that still truly inspire me.”

“That part is important and we developed it in Brooklyn,” he said, “because I think I would never have been in fashion if there were no models. In reality the clothes for me…if they are on a hangar, I don’t really take to them. They have to be on somebody to be alive.”

Madonna perhaps holds the most special place for Gaultier, the duo’s collaborations over the years creating some of the designer’s most provocative pieces. Gaultier agreed that like no other pop icon, she has paved the way for today’s female music stars, specifically Lady Gaga and Miley Cyrus. “Madonna opened the doors and when you open doors, you have followers,” he said. “They were educated by her. Like me, maybe, if there were no Chanel, no Saint Laurent, no Cardin, I wouldn’t be doing the clothes that I do. Madonna was very much ahead of her time.”

So was Gaultier himself, apparently. One of the most endearing items on show is Nana, Gaultier’s childhood teddy bear that, at age six, he customized with a cone-like bra made from newspaper pinned onto the stuffed animal.

“My parents didn’t want me to have a doll,” said Gaultier. “I had my teddy bear and I painted it, putting on makeup. At that time, I was watching television and it was the wedding of Fabiola of Belgium to King Baudouin, so I also planned the wedding for my teddy bear. It was before Madonna.”