The designer paid his first trip to the Lone Star State where the Dallas Museum unveiled its take on "Jean Paul Gaultier: From Sidewalk to the Catwalk." 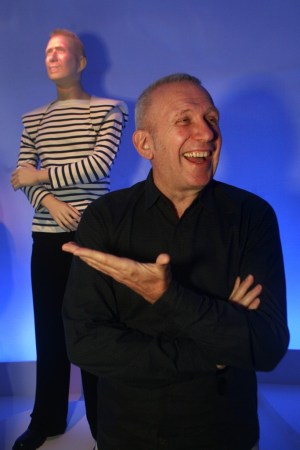 The welcome-to-Texas shindig featuring cowboy and cowgirl dress, flutes of straight tequila and beef chili served in bags of Fritos might have induced culture shock in other Parisian couturiers, but not Jean Paul Gaultier.

“I love it!” Gaultier exclaimed after the Kilgore Rangerettes danced a kick line to the tune of “Deep in the Heart of Texas.” “It’s revolutionary.”

It was only the first of several fetes marking the designer’s first visit to Texas and celebrating “Jean Paul Gaultier: From the Sidewalk to the Catwalk,” the multimedia fashion exhibit opening Sunday at the Dallas Museum of Art.

DMA chairman Deedie Rose, who raised about $1 million to mount the show, hosted the party for donors including NorthPark Center, Forty Five Ten and 101 of the city’s most fashionable women and men.

With 150 mannequins divided into six themed galleries, the Gaultier exhibit is slightly bigger and more dramatically installed than its premiere last summer at the Montreal Museum of Fine Arts, which curated it. It will be up through Feb. 12, followed by runs in San Francisco, Madrid, Rotterdam, the Netherlands and Stockholm.

Gaultier and curators added about 10 pieces to the show, including costumes from “The Fifth Element” and “Kika,” and a couture cowboy and cowgirl perched on a white platform at the exhibit’s entrance.

“This is kind of an homage to Dallas,” Gaultier said Thursday as he led a pack of media to the platform, quickly sketched a cowboy on it and penned his autograph.

Kevin Tucker, the Margot B. Perot curator of decorative arts and design at the DMA, explained that he and his team tried to create a more captivating environment for the show.

The 30 signature mannequins that appear to talk and glance around remain a signature.

“For me, to be honest, to have an exhibition is when you are dead,” Gaultier said. “So I wanted this to be truly very alive. That’s why the models speak.”

Nathalie Bondil, who originated the show as director and chief curator of the Montreal museum, emphasized that the show offers an opportunity to see couture creations and absorb the designer’s philosophy.