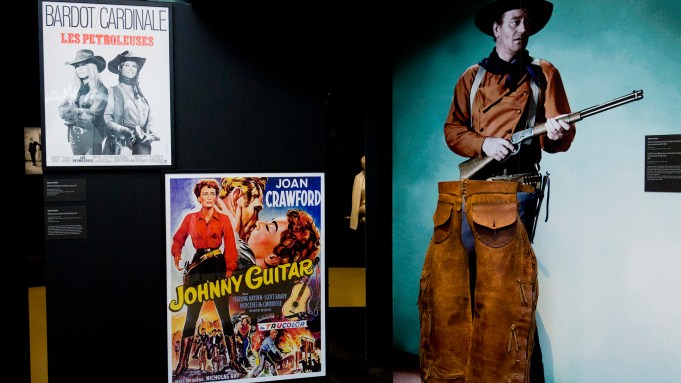 Jean Paul Gaultier still goes to the movies at least twice a week, continuing the lifelong fascination with the big screen that initially sparked his interest in fashion as a youngster — and then nourished it through his stellar 50-year career.

That’s why visiting the “CinéMode” exhibition at the Cinémathèque Française is akin to getting inside the restless, curious mind of the iconic French designer, and understanding how closely fashion and film have been intertwined, mirroring society, the zeitgeist — and occasionally each other.

The lively display — melding film clips, photography, sketches, dresses and other outfits worn on and off screen by the likes of Marilyn Monroe, Marlene Dietrich, Grace Jones, Bruce Willis, Tilda Swinton and Madonna — opens to the public on Oct. 6 and runs through Jan. 16.

It coincides with a major retrospective across town at Les Arts Décoratifs for Thierry Mugler who, along with Gaultier, catapulted Paris fashion to center stage in the ’80s and ’90s.

But “CinéMode” covers a lot more territory, from the 1940s to today, and echoes the sociological bent of “The Fashion World of Jean Paul Gaultier: From the Sidewalk to the Catwalk,” the blockbuster retrospective that traveled the world from 2011 to 2015 and exalted Gaultier’s open-minded, occasionally transgressive vision of society.

During a walk-through with WWD on Monday, when mannequins were still being dressed and photos hung, the designer explained how the display, though not exactly chronological, traces the empowerment of women, plus shifting notions of masculinity and sexuality.

Yet it never fails to surprise and entertain, and will no doubt inspire many visitors to brush up on old movies.

“Film is always a reflection of society, as is fashion,” Gaultier said.

The designer famously costumed several films, including “The Fifth Element,” “The City of Lost Children,” “Kika” and “The Cook, the Thief, His Wife & Her Lover,” and he shared some of the behind-the-scenes machinations.

Stopping in front of a vignette dedicated to “The Fifth Element,” he revealed that Prince was originally cast to play Ruby Rhod and pointed to the costume he had sketched for the music superstar: a black catsuit with a plunging neckline and fringe swishing from the inseams of the pants.

(Incidentally, Julia Roberts was initially meant to play the role immortalized by Milla Jovovich, the designer revealed, citing scheduling snafus for the switcheroos.)

The exhibition opens with a room dedicated to Gaultier’s most formative film from 1945, which he figures he has watched at least 30 times: Jacques Becker’s “Falbalas” (“Paris Frills” in English).

His eyes were first opened to the possibility of a career in live events when, at age nine, his grandmother let him watch the premiere of the Folies Bergère in black and white.

But seeing “Falbalas,” set in the world of couture, sealed his fate.

“Here I discovered another form of show business,” he said with a laugh. “This film was my fashion school.”

Gaultier is perhaps the foremost expert on the movie, whose star, Micheline Presle, played a fashion muse. He marveled at Becker’s accurate portrayal of the high fashion world, thanks to his friendship with couturier Marcel Rochas, who designed some of the gowns on display at Cinémathèque.

Their cinched waists fascinated the young Gaultier, who included in the display his first corset dress — Madonna wore a similar one to the 1985 premiere of “Desperately Seeking Susan” — plus the famous bodysuit with the built-in cone the pop icon wore on stage in 1990. There is also a Rochas gown in miniature that was part of the Théâtre de la Mode, the traveling exhibit after the Second World War featuring small mannequins wearing designer creations.

Stepping into the next room, one is confronted by Hollywood legends, and also maverick French actress Brigitte Bardot. The walls come alive with vintage film posters, and projections of Monroe, Rita Hayworth and Mae West.

Here Gaultier introduces the thread about the sexes: how women shed the femme fatale claptrap and accrued more power on the screen, while macho men slowly became more feminine. Cue a poster featuring John Wayne, the ultimate Western tough guy, juxtaposed with Joan Crawford playing a cowgirl. Later in the tour comes a photo of Marlon Brando, the ultimate screen stud, wearing a tattered tank top with one strap off the shoulder, which Gaultier described as resembling the drape of a gown.

Another vignette depicts Brando all leathered up for the 1953 movie “The Wild One” about a motorcycle gang. Yet Gaultier found an image of Bardot in a similar getup, posed on a motorcycle, from 1964.

“Here’s me who thought I invented the perfecto for women, no!” Gaultier said with a laugh. “But I did combine the perfecto with a tutu, so there’s one difference.”

Gaultier paused by a small projection of Marlene Dietrich — in a tuxedo, top hat and mustache — visiting two couples at a dinner table, and leaning down to kiss one of the ladies. “It’s incredible, this is filmed in the 1930s,” the designer marveled.

There is a small display devoted to beloved French actor Jean-Paul Belmondo, who died in September, as an example of “a more nonchalant elegance,” while Jane Birkin, with short, boyish hair, is seen posed next to Joe Dallesandro with an angular bob in a scene from the 1976 romantic film “I Love You, I Don’t.”

It’s easy to see why Gaultier, who put men in skirts and made eyeliner just for them, would be fascinated with such “virile transvestites” as Tim Curry’s Dr. Frank-N-Furter in “The Rocky Horror Picture Show” or Divine wearing a red fishtail gown in “Pink Flamingos” — and flamboyant male entertainers that have been immortalized in feature films: Elton John and Liberace.

Occasionally, there is a straight line between the celluloid and the runway, as seen in Gaultier’s backless sailor sweater and tight pants, shown on a mannequin in front of a provocative poster from Rainer Werner Fassbinder’s homoerotic “Querelle.”

But when a filmmaker calls on Gaultier, his designs are at the service of the director and the storyline. For example: When Pedro Almodóvar rang him to create costumes for the 1993 comedy-drama “Kika,” he specified that one of the dresses for Victoria Abril be “Las Vegas, but punk. So I did that exploding black dress,” Gaultier said, pointing to a photo of Abril with breasts poking through gory portholes.

It’s surprising how many metal costumes have made it to the screen, and Gaultier uncovered many of them, devoting an entire room to William Klein’s “Who Are You, Polly Maggoo?” — which he referenced in his swan song couture show in January 2020. One can also see Jovovich falling into a crowd as Joan of Arc, Jane Fonda in a space helmet as “Barbarella” and Donyale Luna wandering the desert in Federico Fellini’s “Satyricon” from 1969.

“That influenced me. Look at the metal breasts,” he said of Luna’s look. “It stuck in my head, that scene. And that enormous jewelry, it was fabulous.”

The final room asks: How many movies have featured scenes of fashion shows?

Plenty. Gaultier couldn’t contain his excitement seeing a clip from George Cukor’s 1940 film “The Women,” where the action switches from black-and-white to color once the first model comes out from behind the curtain, or when Monroe strips on her way up a staircase in “How to Marry a Millionaire.”

In tandem with the exhibition, the Cinémathèque, headquartered in a Frank Gehry-designed building in the Bercy district, is hosting screenings of some of Gaultier’s favorite films and live talks with the designer and associate curator Florence Tissot.

Meanwhile, topping Gaultier’s list of films to see next in the theater are the remake of “Dune” and the French comedy “L’origine du Monde.”

Jean Paul Gaultier Joins Jury of ‘Dancing With the Stars’