Target confirmed on Monday that Jean Paul Gaultier will be the third in its series of Designer Collaborations. 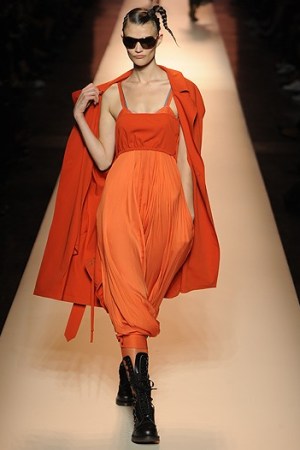 Target confirmed on Monday that Jean Paul Gaultier will be the third in its series of Designer Collaborations, a relatively new concept intended to boost the discounter’s cheap-chic status.

The exclusive Jean Paul Gaultier for Target collection will debut on March 7 in more than 250 stores nationwide and on target.com. The collection will be available through April 11. Gaultier’s Designer Collaboration will have a tighter distribution than the last participant, Anna Sui, whose collection was sold in about 600 Target units.

Jean Paul Gaultier for Target pays tribute to the American woman, celebrating the forces of style both past and present in American pop culture, the retailer said.

Gaultier, who has always identified with popular culture — producing costumes for Madonna in the Nineties — is known as one of the industry’s master tailors. The designer was one of the first to feature innerwear as outerwear on the runway. He has based many of his collections on street style and ethnic influences.

Sui followed last month by channeling one of her favorite TV shows, “Gossip Girl.” Sui’s collection included leather jackets for $149.99, metallic jacquard dresses and silk wrap dresses, $59.99, and was in stores through Oct. 17. Target created a pop-up store for Sui at a private four-story town house at 54 Crosby Street in Manhattan’s SoHo neighborhood. It opened to big crowds on Sept. 9 and closed Sept. 11. It could not be learned whether Target will do a pop-up store for Gaultier as well.