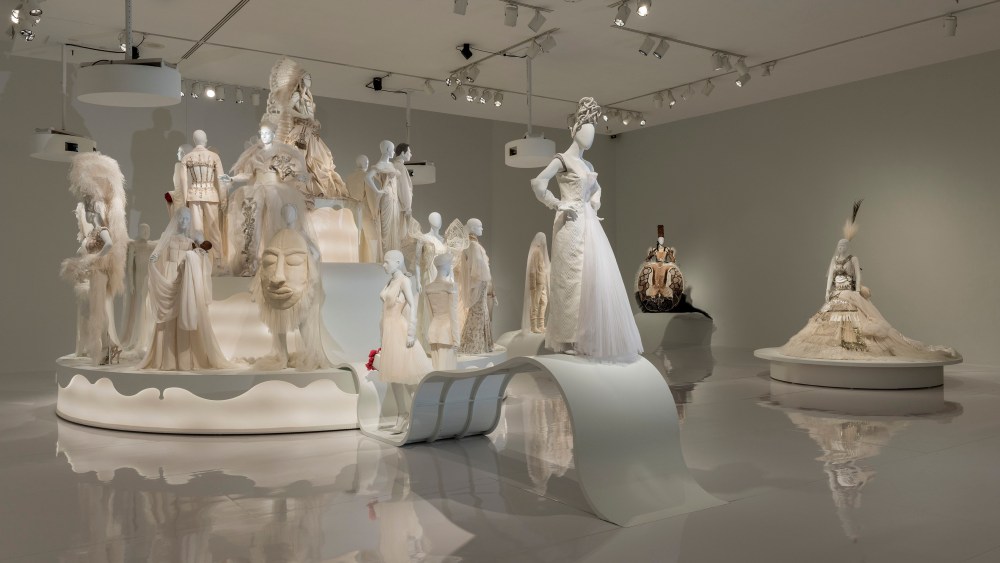 TORONTO — Jean Paul Gaultier has never played it safe on the runway — or off it.

“I have always seen fashion as something that should be alive. Clothes on a hanger never interested me,” Gaultier told WWD.

No, for Gaultier, breathing new life into every effort became the gold standard, even as he ventured into music, dance, film and costume design, where he caused a worldwide frenzy thanks to the iconic cone bras he created for Madonna’s 1990 “Blond Ambition” tour.

That is why the current organizers of Toronto Fashion Week from Sept. 5 to 7 knew that Gaultier had to be the first to headline its new “In Conversation” series moderated by Derek Blasberg, the host of “CNN Style” on CNN International.

“Gaultier is a cultural giant,” said Suzanne Cohon, TFW’s arts and cultural ambassador. “Hearing him talk candidly about his life and career in this intimate atmosphere, we have created promises to be quite extraordinary.”

Gaultier, however, will not reveal any details. “I prefer to be surprised. That is the best way,” he said.

Yet enlisting the designer, along with other inaugural speakers like Arianne Phillips and Petra Collins, as well as integrating more arts programming is all part of a new vision to make TFW a more culturally layered fashion experience, Cohon said.

That includes the debut of “Dalí X” — an exhibit of couture pieces influenced by Salvador Dalí’s work; as well as a screening of “Franca: Chaos and Creation,” director Francesco Carrozzini’s intimate ode to his mother, Franca Sozzani, the late editor in chief of Italian Vogue.

This template allows TFW to become more of a global event, “which is what we want,” said Peter Freed of Freed Developments. “There’s a fine line between art, fashion, architecture and lifestyle. Here was a chance to connect the dots and build a better global fashion festival.”

In December 2016, Freed Developments revealed the purchase of Toronto Fashion Week from IMG Canada Ltd. IMG had pulled the plug on Canada’s preeminent fashion event in July 2016 due to a lack of funding, leaving industry insiders to ponder its future resurrection, it at all possible.

Freed, along with founding sponsors Hill & Gertner, Yorkville Village and The Hazelton Hotel, invested “several million to do this right,” he said. “I served on fashion week’s board before. Looking back, fashion week’s international influence was limited. We want to elevate that profile. Working with Jean Paul and our other featured guests is a great step towards accomplishing that goal.”

Gaultier’s TFW appearance will mark his first visit to Toronto.

“I’m looking forward to discovering Toronto,” said the designer, who hinted at a new show project in development but declined to reveal additional details.

However, one city Gaultier knows well is Montreal, where he will travel for a special appearance on Sept. 8 at the Montreal Museum of Fine Arts.

In May, the museum launched “Love Is Love: Wedding Bliss à la Jean Paul Gaultier,” an exhibit featuring 35 couture wedding gowns created by Gaultier between 1991 and 2017.

“When ‘Love Is Love’ opened, Jean Paul was finalizing his fall collection and could not attend. This was his chance to visit Montreal and our chance to invite the public in before the show ends on October 22 and see the extraordinary artistry in these gowns,” said exhibition curator Thierry-Maxime Loriot.

Gaultier’s initial collaboration with the MMFA began in 2011 with “The Fashion World of Jean Paul Gaultier: From Sidewalk to the Catwalk.” The stunning retrospective traveled to 12 cities and was viewed by more than 2 million visitors between 2011 and 2016 — setting a record for a fashion exhibition.

“For me, what is most important in ‘Love Is Love’ is that it is about fashion and tolerance,” said Loriot. “In the show you will see a bride with a baby in her hands, dresses with great humor and ones that reference many different cultures. But that’s who Jean Paul is,” he added.

Gaultier’s biggest wish is that “Love Is Love” will convey a “strong message of tolerance and inclusion” to all who see it.

“For me there is not one kind of beauty,” he said. “It can take all shapes, ages, skin colors and creeds. I simply hope that love will prevail.”