A look at the designer’s exquisite 1925 apartment. 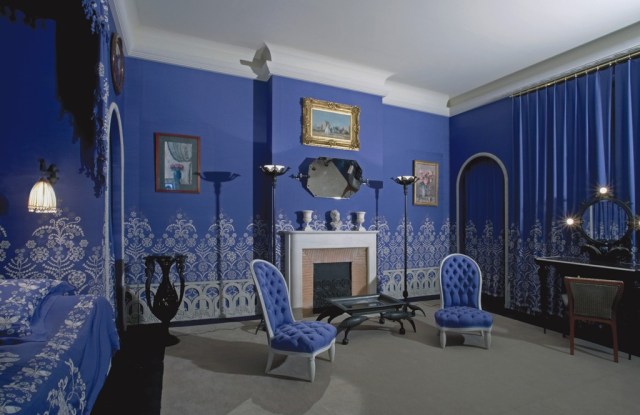 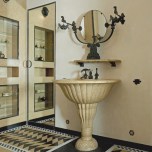 Jeanne Lanvin’s collaboration with French interior designer Armand-Albert Rateau culminated in the design of her private apartments, completed in 1925, in the mansion she bought on Rue Barbet-de-Jouy in the 7th arrondissement of Paris.

Evelyne Possémé, curator of the Art Nouveau and Art Deco department at the museum, said the gift came shortly before a major 1966 retrospective that revived interest in Art Deco. It is now the most impressive of the three period rooms featured in the wing.

Consisting of a boudoir and bedroom in signature Lanvin blue and a lavish marble bathroom, Lanvin’s private apartments were first shown in their entirety in 1985. In 2006, they were moved to their current location on the fourth floor of the museum as part of a 10-year renovation project.

“It’s a huge undertaking, because in fact you have to build a box in which you have the ceilings with the molding, and only afterward can the different specialists install the original wood paneling and the marble floor, re-create the stucco walls and reassemble the bas-relief,” Possémé noted.

The bedroom walls, meanwhile, are draped in the original fabric embroidered by Lanvin’s workshop. The curator said the wood paneling in the boudoir was particularly noteworthy, as Rateau clearly referenced the Louis XVI period while adding idiosyncratic flourishes.

Rateau, whose other famous patrons included German-born banker George Blumenthal, trained with Georges Hoentschel before taking over as creative director of Alavoine & Cie. After being introduced to Lanvin by couturier Paul Poiret, he helped Lanvin launch her interior design division.

“He was a major figure and slightly different from other interior designers of the period, in the sense that he took inspiration from the past in order to turn it into something new,” Possémé explained. “You can’t class him among the modernists. He is inspired by the past, but his bronze furniture is really totally original.”
In addition to the lavishly appointed rooms, which appear hauntingly intact, visitors to the museum can take in a gold-and-black lacquered wood screen designed by Rateau and a pair of oversize hammered copper Jean Dunand vases, all of which were in Lanvin’s dining room.

Their original home has since been demolished.