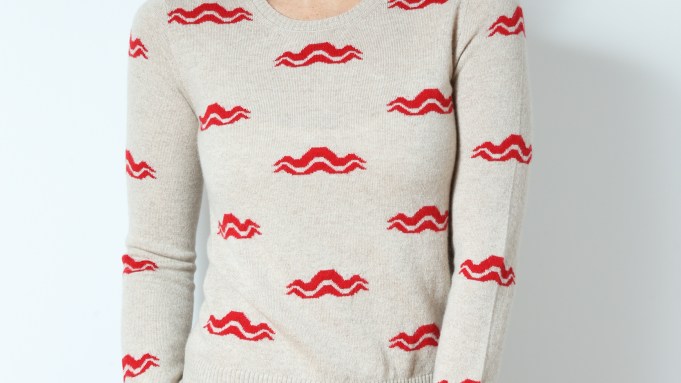 With two seasons under its belt, Jed, the luxury knitwear brand designed by Jed Krascella, is gaining traction. Known for its cashmere knitwear in colorful patterns and witty designs, Jed delivered its first line in October for resort, has shipped spring and is currently showing fall to retailers.

For resort and spring, Jed opened accounts including Mitchells of Westport, Conn.; Wilkes-Bashford in San Francisco; Gratus in Beverly Hills; Mi Place in Newport Beach, Calif.; LuxCouture in Newton, Mass.; By George in Austin, Tex.; Distractions in Aspen, and Mario’s in Seattle and Portland. The company is now in discussions with major stores in New York about carrying the high-end collection.

“We’re a small firm and we’re all chipping in to do everything. We’re managing our growth and who we show to,” said Ashley Leeds, chief executive officer, in an interview at Jed’s new offices at 134 West 29th Street in New York. The company employs five people.

Jed’s knitwear incorporates specialized knitting techniques such as intarsia, cabling and jacquards. Hand-knits are constructed of Mongolian cashmere with yarn, hand-dyed in the U.S. The knits are made by home knitters in Pennsylvania, and the machine knits in Italian cashmere are manufactured in Italy. For spring, the company added silk and cashmere blends to its classic cashmere, and for fall it is offering double cashmere.

“Each season we’re layering on more,” said Krascella, who cut his teeth as vice president of design at Perry Ellis, working closely with the late designer during his rapid ascension to prominence in the late Seventies and early Eighties. Krascella went on to become executive vice president and creative director of Limited Design Services.

For fall, Jed’s knitwear wholesales from $260 for a machine knit up to $1,500 for a custom hand-knit sweater coat.

“The $1,500 one is the one everyone wants,” said David Cassaday, vice president of sales and merchandising, pointing to the limited-edition hand-knit funnel-neck clutch coat with allover engineered zebra pattern in eight-ply cashmere.

“They’re beautiful sweaters and beautiful quality,” said Iris Frankel, owner of Mi Place, a two-unit specialty store in Laguna Niguel and Newport Beach, Calif. “Our customers like the feel of it. It’s silk and cashmere and for us, that weight is perfect,” she said. She started carrying the line for spring and bought a few styles in several different colors.

“We’re trying to create classics with character,” said Krascella. “We like classic bodies. We’ll make them slimmer or make the necklines lower so they’re sexier, he said.

“What I love about the line it has fits and styles that appeal to conservative dressers who want a little bit of pop to more daring styles for someone who wants to stand out in a crowd,” said Leeds. Sizes range from small to extra large.

Krascella said he will eventually add a basics program to support the novelties. “We consciously started out with the novelty, and are planning some solids for resort done our way,” he said. “In each season, we’ll add solids, ribbed and trimmed programs, more patterns and a large expanse of color.”