Jenny Packham on the Duchess of Cambridge and More

In New York for her bridal runway show, the designer talked dressing the Duchess. 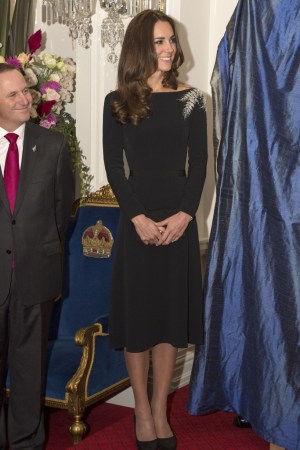 Jenny Packham was fast asleep when the Duchess of Cambridge wore what quickly became known as The Fern dress to a state dinner in New Zealand last week.

In New York for her bridal runway show, Packham could tell as soon as she woke up April 10 that something was afoot. “Sometimes when we dress celebrities, there are always loads of Twitters and things like that when I wake up, I think, ‘Oh right, she wore it,’” Packham said before her runway show Friday.

Kate earned high marks from the media and bloggers for the bespoke long-sleeved black dress embellished with a fern motif on the left shoulder. Packham’s business and life partner Matthew Anderson added, “We always seem to be away when these things happen.” (The pair were also abroad when a Jenny Packham-dressed Kate and Prince William left St. Mary’s Hospital with Prince George last year.)

While it is her company’s policy not to discuss celebrity clients, Packham admitted it can be difficult not to. Asked if she works directly with the duchess, Packham said, “Absolutely. It’s always quite a collaboration.”

Unlike American designers, who generally don’t know where and when First Lady Michelle Obama might wear their clothes, Packham has a better idea of what’s in store with the Duchess of Cambridge. “You kind of always know where it’s going to be worn,” she said, noting that the duchess has a great sense of style and a British one.

Two weeks ago she dressed another well-known British Kate — Kate Winslet — for the London premiere of “Divergent.” The designer said, “Of course, it’s always nice to work with Kate Winslet. It’s just the icing on the cake.”

Packham and Anderson have other reasons to celebrate. Packham will have her first ready-to-wear trunk show Thursday at Neiman Marcus in Los Angeles with a VIP salon scheduled for the night before. They will also be meeting with editors and Hollywood stylists at Chateau Marmont during their stay. There will be stops at vintage stores like Decades, as well as a visit to the Marilyn Monroe exhibition at The Hollywood Museum.

In a first for bridal, Packham opened and closed her bridal show at Industria Superstudio Friday night with a plus-size model. While the company has always offered wedding dresses up to size 18, the plus-size collection is new. Inspired by the Thirties British society photographer Madame Yevonde, her collection consisted of silk chiffon gowns with tiered hemlines, signature beading, antique metallic silvers and capes. The designer’s previous work will be part of the Victoria and Albert Museum’s “Wedding Dresses 1775-2014” exhibition, which opens May 3 in London.

Bridal accounts for 65 percent of the company’s total volume, with eveningwear and retail comprising the rest. In business for 26 years, Packham said building the American market has been a priority since opening a downtown Manhattan showroom a few years ago. So much so that the five-person New York-based team has outgrown their space. In total, the label has 70 staffers. For 2014, a 30 percent sales gain is expected, according to Anderson. With three stores in London, the company is considering opening new ones in the next year or two. “We have been growing in the U.S. market, that’s why we have the showroom. It’s a little like becoming Americans,” Anderson said.

Minutes before the start of Friday’s show, which featured a blue-sky backdrop, Packham said, “If I don’t enjoy this bit…this is the pinnacle of everything we do, doing the collection, meeting the people we sell to, which gives me amazing feedback.”