The designer discusses his first comprehensive collection for the brand, which is due to be unveiled in Milan on Thursday. 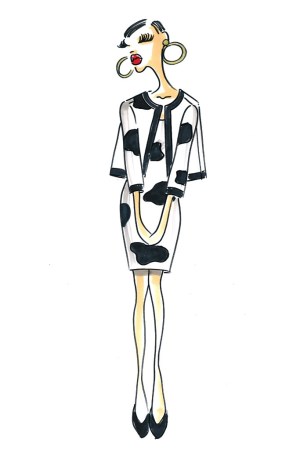 MILAN — “I feel like a child at Christmas with new toys, I can’t play with just one.”

So said Jeremy Scott of the comprehensive collection for Moschino — his first for the brand, due to be unveiled on Thursday here. Leveraging the label’s bounty of references and iconography, infused with his own quirky sense of style, Scott’s lineup for Moschino will encompass looks “from eveningwear to suits, in crepes, bouclés, leathers, knits, silks, touching upon all of them. Imagine our pre-fall collection with a volume turned way up, radio-station up,” he said.

For pre-fall, Scott presented coats and dresses embellished with gold chains and lettering, and bags shaped like mini-Moschino jackets. “Bags capture the essence and passion, and Franco was the first to ever do this, create objects with bags. He is a wonderful inspiration, with his uniquely Franco items,” said Scott.

“Elegant, glamorous, over the top” is the brand’s woman for Scott — with a dose of humor, as per the label’s founder, the late Franco Moschino.

Friendly and approachable, sitting in an airy showroom at the Moschino headquarters, Scott easily agreed to a last-minute interview in mid-January, a day before returning to Los Angeles, where he is based. Wearing a colorful T-shirt and loose pants with an acid-yellow animal print, Scott, who was tapped in October to succeed longtime creative director Rossella Jardini, said he felt “a natural, instinctual connection with the vocabulary of the brand. I had it without even knowing it, and I discovered more of it here. This is an effortless fit, it’s me speaking my language.”

Massimo Ferretti, chairman of Moschino’s parent company, Aeffe SpA, said hiring Scott “was a necessary change. Every now and again, fashion needs to be renovated and shaken, just as Franco did in the Eighties.”

Ferretti underscored the relevance of finding “someone fitting with the identity and the DNA of the brand,” capable of precisely reinterpreting it, reaching “a younger and more transversal customer. It’s not for everyone.” The entrepreneur was enthusiastic about Scott, describing him as “not only a good designer, but excellent in understanding what Moschino represents. We wanted to avoid distortions with characters that have no connection with the brand, that would damage it in the long run. He knows the style, he’s followed it and understands it, he has loved Franco’s messages. The project he first presented us reflects Moschino’s roots, which he brought back in a more contemporary way.”

Scott’s own fun and tongue-in-cheek collections resonate with Moschino’s ironic lineups. Scott, often dubbed the “club kid,” for fall sent out costume-y unisex furry outerwear that culminated in a yellow Big Bird-like head-to-toe ensemble. A graduate of the Pratt Institute, the Missouri-born designer introduced his own signature brand in Paris in 1997 — a line that will not be discontinued. Scott has worked with Christian Louboutin and Stephen Jones on accessories for his runway show, and in 1996 and 1997, he won the Venus de la Mode Award for Best New Designer. In 1999, he was nominated for Best Young Designer by the Council of Fashion Designers of America. He has also worked with brands including Linda Farrow, Longchamp, Swatch and Smart, and is known for his eccentric Adidas Originals creations, incorporating teddy bears, cow prints and even leopard tails into his sneaker line.

Scott has a strong connection with pop culture, drawing the likes of Rihanna, Katy Perry, Miley Cyrus, Madonna, Lady Gaga, Kanye West and Gwen Stefani to his designs, and is expected to add a contemporary edge to Moschino. “People look to celebrities and pop stars for inspirations, ever since Jean Harlow. We were looking at ‘Dynasty,’ not at Thierry Mugler, people always have,” explained Scott. “Sometimes there’s a new person — Miley, Rihanna, Katy — but it’s the same old story, just with new players. Emblematic people show us it’s OK to not wear pants with a jacket and people interpret that as they want. They interpret, without being clones.”

As per the new course, Ferretti is also planning changes in distribution and global expansion. “We are pushing the accelerator for growth, and Jeremy is a good communicator,” he said.

There are 153 Moschino units, including boutiques, corners and shops-in-shop. The brand is available at 250 multibrand stores and Ferretti said he would like to reach between 220 and 250 venues in the next three years. Moschino sales rose 10 percent in 2013 and Ferretti expects a 15 percent gain in 2014.

Italy is the brand’s main market, accounting for 29 percent of sales, followed by Europe (21 percent) and the Far East (13 percent). The Commonwealth of Independent States, whose participating countries are former Soviet Republic countries such as Russia, Ukraine and Azerbaijan, represent 15 percent of sales, followed by the rest of the world (10 percent), the Middle East (8 percent) and the U.S. (4 percent).

Ferretti said the company is targeting expansion in the Far East and South America as well as a consolidation of the European Union and the U.S.

Aeffe, which also controls the Alberta Ferretti and Pollini brands and produces and distributes collections for labels including Emanuel Ungaro and Cédric Charlier, bought 70 percent of Moschino in 1999. The remaining shares are held by Italian manufacturer SINV, which also produces the Love Moschino ready-to-wear collections. The Cheap & Chic and Love Moschino brands are each carried by 700 stores.

Scott has opted for a show at 8 p.m. during fashion week here as it is “more naturally befitting to the work I do,” and it is “put back into context,” as Franco Moschino also showed his collections in the evening. “It’s more fun, with an element of joie de vivre and party mood — besides, I am not a morning person,” said Scott with a laugh.

A “big movie fan” who loves the “escapism of films,” Scott treasures living in California, where he finds inspiration. “The sunlight, the quality of life, politics, the mentality of people, the food — I am a vegetarian and it’s easier to be one there. I love the outdoors, I have a deer in my backyard — from growing up in a farm to the city I need to live in,” said the designer, who speaks Japanese, French, Spanish and German.

Ferretti finds no fault with this modus operandi and with Scott dividing his time between Milan and Los Angeles.

“Today the world is small, there are no problems in communication and he is very present, serious about his work and tireless,” he said.